The chassis is based on that of the RS and follows earlier Buell models in several key features as well as its aim of minimising mass and concentrating it near the bike’s centre. The frame’s broad aluminium spars double as the fuel tank, with 17-litre capacity. The swing-arm pivots on the rear of the stressed-member engine (though it doesn’t follow Buell tradition by holding the dry-sump motor’s oil) and works the diagonally mounted, multi-adjustable Showa shock with no rising-rate linkage.

Big Piston Forks from the same Japanese firm are held by a thick top yoke with a transverse steering damper above it. The magnesium rear subframe contributes to that low weight. So do the lightweight, cast aluminium 17-inch wheels with their very slender spokes. In familiar Buell fashion the front wheel holds an eight-piston Nissin front brake calliper and single perimeter disc, this one enlarged to 386 mm in diameter and cooled by air directed around the fork leg by a couple of plastic scoops. 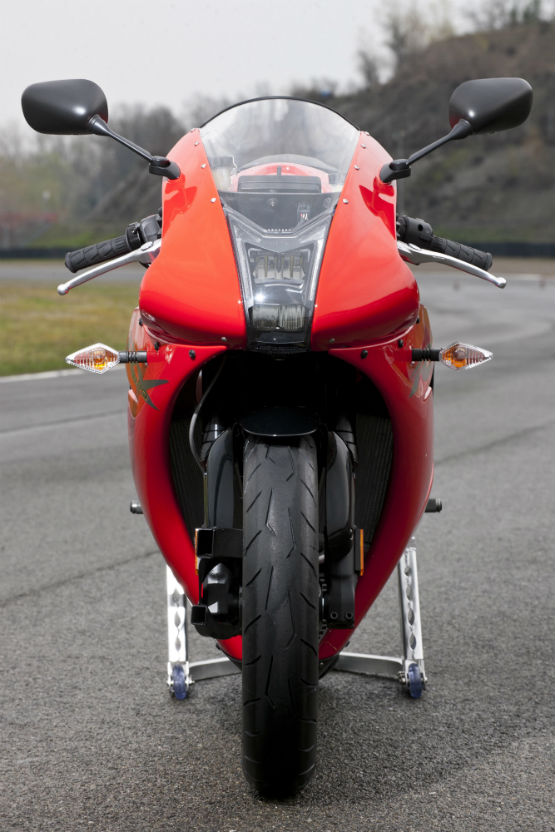 So much of the engineering is typically idiosyncratic. What’s much less so is the RX’s relatively conventional styling, which lacks the complex detailing of an MV Agusta or Ducati, but is respectably sleek and attractive, in yellow, red or black. Finish seems mostly good and the fairly tall, thinly padded seat gives a view of low clip-ons, and a stubby screen above a colourful electronic display that shows speed, revs and numerous other functions, including fuel consumption.