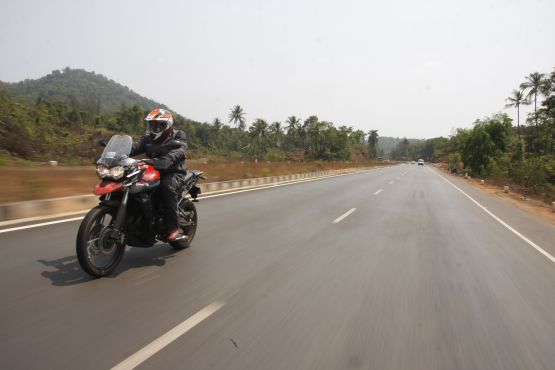 After a healthy dose of serenity, I swing my leg over the Tiger, turn the key and thumb the starter. The triple fires up, releasing precious carbon-dioxide for the plentiful trees to breathe in and return the favour with more oxygen. The road we’re on goes past Gudalur and on to Sultan Bathery. It was already well past noon, and, slowly, more houses came into view and the forest area began diminishing; we were nearing the city. Originally known as Ganapathyvattom, it was renamed Sultan Bathery in the 18th century after Tipu Sultan captured the Jain temple there. It is the largest town in the Wayanad district.

As we entered the city, it was already two in the afternoon. A quick walk around the marketplace led us to a tiny restaurant which had a surprisingly succulent selection to choose from. A hearty meal of gravy, rotis and biryani, and some much-needed lemon beverage later, we set off towards the capital of Coorg – Madikeri. The clouds had begun to set in, giving some respite from the soaring temperature and the roads became narrower and even more riddled with potholes. However, the endless forests were enchanting. Except for the occasional few locals we crossed on our way every now and then, there wasn’t a soul around. After what seemed like a loop, we got around to the city and found ourselves at the junction which would take us further into the city or on towards Mangalore. Luckily for us, there was a petrol pump and a restaurant right there and we stopped for a refresher.

Some ice-cream and coffee later – yes, the coffee was essential – we headed down the steep curve which led into what seemed like hills and forest just a few kilometres away. Dusk was settling in fast and, although beautiful, the mountains on one side with tall trees on the other were now just outlines in the darkness, which, together with the vast expanse of sky straight ahead made it look like we were heading right into a huge mountain. As we pushed on, darkness was slowly but surely making its presence felt. The Tiger and its always-on headlamps made things easy no doubt, and with absolutely no other source of illumination in sight. That became aggravatingly evident when we came to the first of many road-works. In pitch darkness, the road ended all of a sudden and rough patches for kilometres on end were present without so much as a warning strip of tape. We were horrified at the authorities for their utter lack of basic safety consciousness. Luckily, the ABS brakes on the Tiger meant that I shed speed in a hurry and maintained control. Slowing from over 100 km/h to 40 in a matter of a couple of seconds is no small feat, and I was thankful I had big dual discs up front to handle the pressure.

The highways soon grew wider and the city lights in the distance meant we were close to Mangalore. We reached the city about nine o’clock at night and immediately went in search of accommodation, which, thanks to a Bike India fan, we found in a jiffy. A quick sea-food dinner later, it was time for some much-needed shut-eye. We would be heading to Goa the next day, but now we wouldn’t have hills, we’d have the long western coast, going past the foodie delights of Udupi and Karwar.