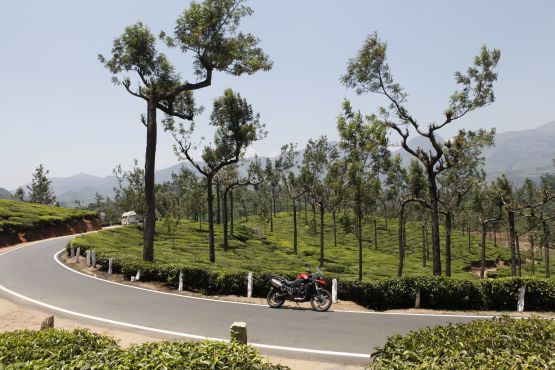 Devikulam is one of the largest tea gardens and it’s hard to miss. There’s just one narrow two-way road leading in and out of the place and it has a myriad of steep inclines and sharp turns. The Tiger’s motor and its suspension were a huge relief. The ride quality and, in fact, the rideability are fantastic. Although not a typically high-revving unit, it does pick up the pace quickly. The 800XC can pull from as low as 2,000 revs and potter around at low city speeds in fifth, still accelerating cleanly and with no delay when a burst is called for. A few turns later, the acres of tea gardens became dwarfed by the sheer expanse of plantations there. 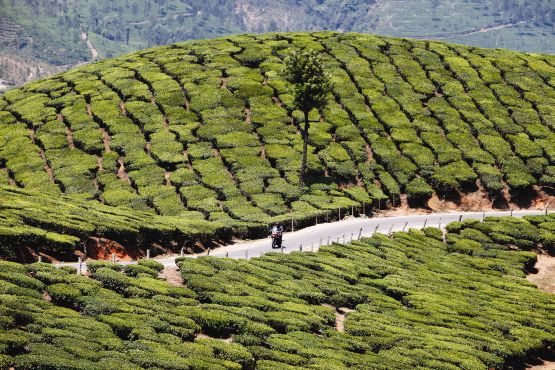 Devikulam has entire hills for miles on end engulfed in tea! The hills and valleys all the way down to the river are a bright green; you can stop and stare for hours on end and it will never cease to be beautiful. The sun may have been high in the sky, but the clouds and the rays interplayed to create a mesmerising scene over the river. This is as serene as serenity can get, notably in the middle of nowhere. 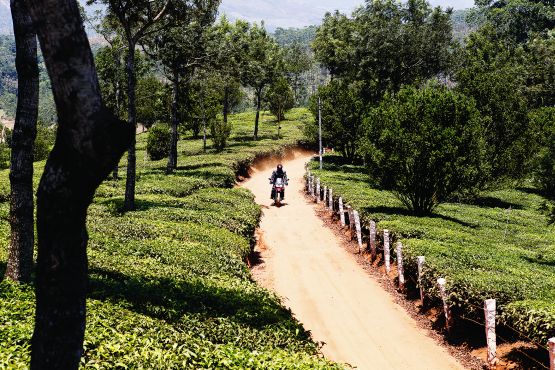 The diminishing tea plantations meant we were closer to the city and, soon enough, a few turns later, we were right there in the middle of the hustle and bustle of a chaotic commercial hill-station. Munnar it was, well past noon. The annoying honking was coming in from all directions: left, right, centre and even from above, as we noticed a strange little road joining the main street from somewhere higher up. Our hurry to find lunch was only second to the hurry to find a parking spot. A quick jaunt through the market and a hot lunch later, we set off for Ooty. 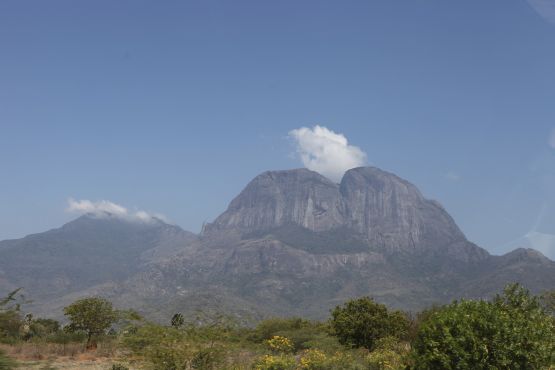 It was going to get rather late, no doubt there, but the ghat leading out and the Chinnar wildlife sanctuary ahead meant there was much to be seen before the sun went down. The ‘highway’ leading out of Munnar and into Chinnar was more ‘high’ than ‘way’ and the narrow road together with the altitude made for many gasps and sudden braking. However, there was no denying the rhythm that rider and bike had developed and the Tiger flew over the terrain, taking everything in its stride. Another saviour was the big 19-litre fuel tank. Even with a fuel efficiency close to 20 km/l, that gave us a good range to consider as a safe bet and we could push on without worrying about economy.

As we descended into the forest, the greenery had changed to something resembling an African trail. Dirt and high grass abounded whichever way you looked and there was always some form of wildlife lurking in the background, given away by the sudden rustling which was triggered by the high-pitched purr from the Tiger’s three-pot motor, close to 3,500 revs and barely breaking into sweat, as it zipped through the reserve. The roads within had now widened and the pace was being upped, much to my joy. The Tiger was now doing a sprint and the kilometres quickly diminished.

As we exited the reserve and headed back into civilisation, the sun was dipping quicker than we would have liked. We were in the state of Tamil Nadu again and the sprawling palm trees with vast open spaces in between were becoming a regular sight. The silhouettes of windmills in the distance made for a captivating sight and, schedule aside, we stopped on the side as the sun turned pink and bid us goodbye.