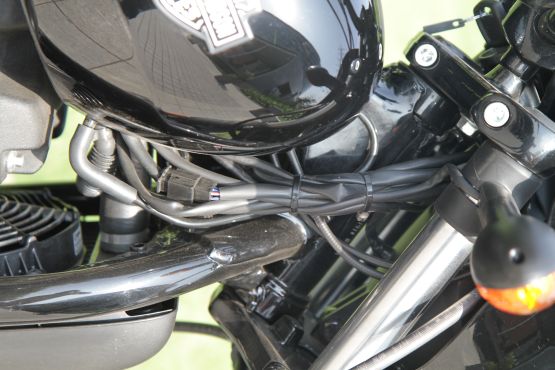 Speaking of dough, while overall the Street 750 is well-finished as a product, there are certain areas where the venerable brand’s efforts at cost reduction become evident. A little too evident if you ask us. Where this is most visible are in the quality of the plastics that have been used to craft the switchgear. From the material to the quality of the finished product there is vast scope for improvement. While we appreciate that cost is an issue, especially in price-conscious markets like ours, quality is not something the discerning buyer would like to compromise on. Especially if the bike is being positioned as an entry-level Harley since people who want to buy something aspirational would not like to put their hard-earned money on stuff that doesn’t look nice. Functionally, the switchgear does a good enough job. Most riders who will be entering the Harley family with this bike will find it easy to adapt to since the operation of the switches is more akin to what one finds on Japanese motorcycles than on other Harleys. Instrumentation comprises a single round speedo with tell-tale lamps integrated into it. A fuel-gauge is sorely missed, though.

Thumb the starter button next to the right twist grip for the throttle and the brand-new 749-cc liquid-cooled Revolution engine whirs to life before settling down. The purist will not enjoy the new exhaust note, for gone is the old Harley signature of “potato-potato”. But being a quieter engine this bike will easily remain within the ever tightening emission norms round the world, especially with respect to the street riding conditions it’s meant for. The bike slots into first via the toe-only shifter with some effort. Even after riding the whole day the gearbox continues to feel clunky and requires effort, but then Harley gearboxes aren’t known for their butter-smoothness. Although this is fine for highway riding where you can settle the bike in at a nice cruising pace in the sixth gear, it does become painful in stop-and-go traffic on city streets. 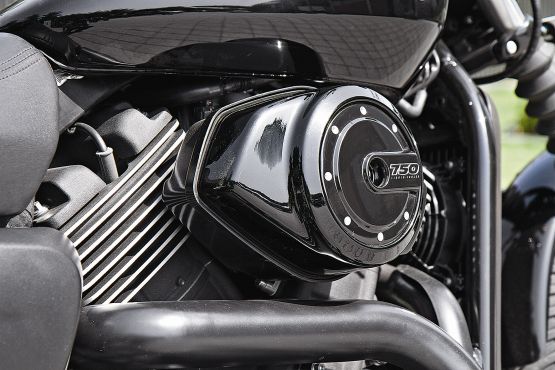 The engine, on the other hand, is smoother and more refined than other Harley mills. True, there’s still a fair bit of vibrations that are transmitted through the palms and the feet, but in the larger scheme of things they are irritants that the H-D enthusiast would call “character” and would have no problems living with. Without hazarding any guesses about the engine’s max power figures, we will go with the company provided max torque figure of 60 Nm at 4,000 RPM. There is power available on twist throughout the rev range. So racing between red lights is easily done. At the same time, overtaking is mostly taken care of by a simple twist of the wrist. For those of you who like to push the envelope, you could take the speedo needle nearly up to its limit, but it feels a little strained at that speed. The Street 750 is far more comfortable cruising at about 120-130 km/h, which in any case is plenty fast. But it’s really the city streets where the bike comes alive. Compared to every other Harley or any big bike, the Street 750 feels far easier to navigate through traffic. This despite its 222-kilo bulk. It’s nimble-footed and is very flickable (for a Harley). As a result, it makes short work of filtering through traffic. The only thing that becomes a bother is the engine heat when the mill is left idling at a red light. Although it’s much much better than before, courtesy the liquid-cooling as opposed to the air-cooled V-twin units on other Harleys, it can get painful none the less. Especially in harsh Indian summers. 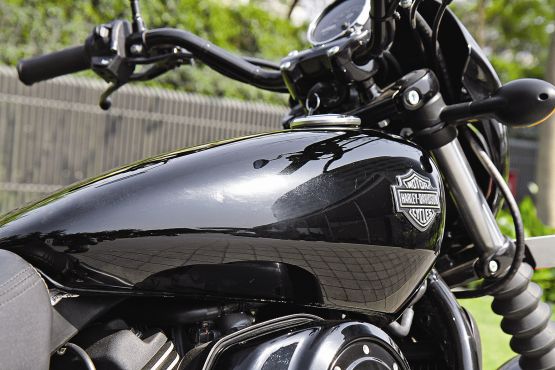