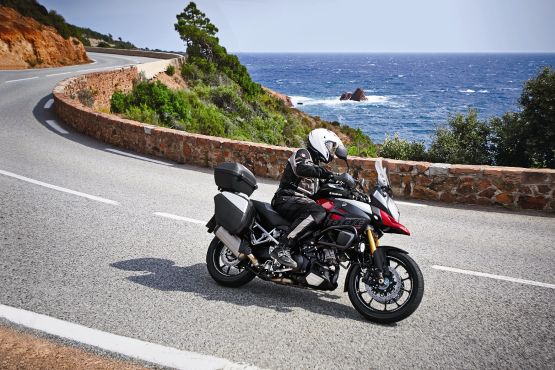 The V-Strom is also fitted with Suzuki’s first-ever traction control system. It’s a relatively simple system (no lean-angle detection here) controlled by sensors for wheel speed, plus the positions of throttle, crankshaft and gearbox. A button on the left ’bar gives choice of two settings, both for road-going use, and allows the system to be turned off.

Chassis updates begin with the aluminium twin-spar frame that, according to Suzuki, is stiffer and 13 per cent lighter than its predecessor, and holds a longer twin-sided aluminium swing-arm. Wheelbase is 20 mm longer at 1,555 mm due also to a front-end re-design that incorporates larger diameter, 43mm forks that are a USD design for the first time. New 10-spoke cast wheels are lighter than their predecessors; the brake system is uprated with Tokico monobloc callipers and ABS. 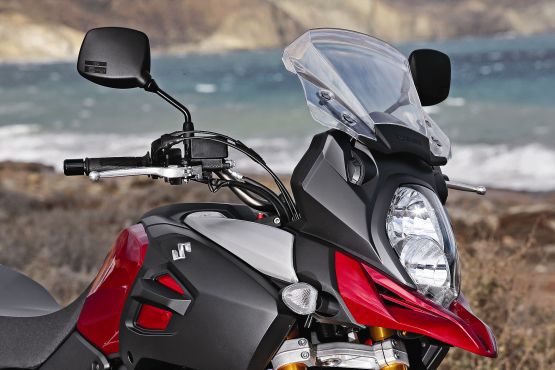 The beaky, dual-purpose styling is pleasant enough (and echoes old Suzuki bikes such as the DR Big), if slightly misleading given the V-Strom’s lack of off-road intent. An overall air of quality, from features such as the comprehensive digital instrument console and built-in luggage rack, is marred by unfinished details such as the exposed exhaust valve mechanism and tangle of ABS wiring around the front brake callipers.

At 228 kg the V-Strom is eight kilos lighter than the old model, mainly due to its single-silencer exhaust. The seat is 10mm taller, at 850mm, but it’s narrow at the front. The bike felt reasonably manoeuvrable as I headed down the coast road from Almeria. The engine’s new-found flexibility was immediately welcome, giving a smooth low-rev response that made for a relaxing ride through sleepy coastal villages.

Suzuki’s focus groups with V-Strom-owners highlighted improved low-rev performance as a key wish, and this bike certainly delivers. When we headed into the hills on a succession of winding, near-deserted roads, the strong midrange came into its own. The Suzuki pulled well from that 4,000 RPM mark, staying smooth as the tacho needle headed towards the redline at 9,250 RPM. The traction control activated when I cracked the throttle deliberately on slippery urban roads, especially on its more intrusive setting, but I wasn’t aware of it in normal use.

When winding the power on to exit slower turns I did sometimes notice a slightly abrupt feel that seemed like transmission snatch, though it wasn’t serious and was undetectable at higher speeds. The six-speed box is new, with a shorter top ratio, and shifted smoothly enough. The clutch incorporates Suzuki’s SCAS clutch assist system, designed to give a slipper clutch type action along with lighter lever pull, and worked fine.