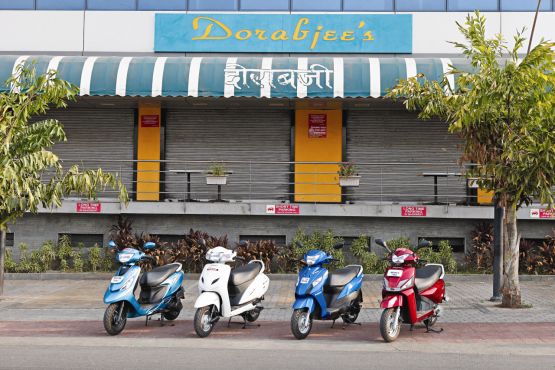 Mahindra’s latest offering in the scooter segment is an interesting prospect. Visually, the design boffins at Mahindra have given the Gusto a very retro frame and angular lines. But when you add those twin rows of parallel air slats running down the Gusto’s fascia, the horizontal silver slab bearing the manufacturer’s symbol positioned underneath these vents, and that beak-like front fender, they’re all slightly at odds with the aforementioned angularity. The appearance of the Gusto then is fine and dandy when each aspect is looked at individually, but the sum of whose parts leaves room for improvement.

The Gusto has the distinction of having the longest wheelbase of all four competitors at 1,275 mm. It should come as no surprise then that the Gusto is by far the most spacious of the lot in terms of leg-room. The long seat also results in the greatest degree of comfort when carrying a pillion.

This comfort extends to the ride quality of the Gusto as well, which is well sorted and protects you from the rigours of our dilapidated roads. Handling-wise, don’t expect the Gusto to dive into corners since it is bulkier than the others, but having said that, it isn’t difficult to manoeuvre either, pretty much par for the course. Where the Gusto could have been better, though, is performance. It is powered by a 109.6-cc engine that churns out 8.1 PS and 9.0 Nm of twist which is decent, at least on paper. The issue is that the power delivery is sluggish, and the bike tops out at a disappointing 76.4 km/h. Reaching 60 km/h from standstill takes 14.1s which leaves it in the wake of the rest – quite literally. The Gusto is also slowest to standstill from 60 km/h with the 130-mm drum brakes putting up 3.49s on the chart. Economy-wise, — its overall figures stand at 45 km/l, the lowest of the lot.

The Gusto might not dominate the performance charts, but where it does win out is in the features department. First, you have the Centuro-esque remote flip-key which is pretty useful when you’re in a large parking lot and can’t locate your bike. Then there’s the little front storage compartment which is conveniently placed to slip in a small book, or what it’ll most commonly be used for – mobile phones. The seat is another great feature, it opens from the front rather than the conventional method where the seat is hinged at the front instead, and it even stays locked in place when fully opened, which is a great help when fuelling-up or accessing the under-seat storage. The absolute winner in terms of the Gusto’s features, however, is the height-adjustable seat. Whether you’re more ent or hobbit, the 35 mm of play from the height adjustment feature means people with comfort issues owing to their height now have a solution to their problems. This solution comes at a price, though, because retailing at Rs 57,600 (OTR, Pune), the Gusto is the second on the price-list for our shoot-out.