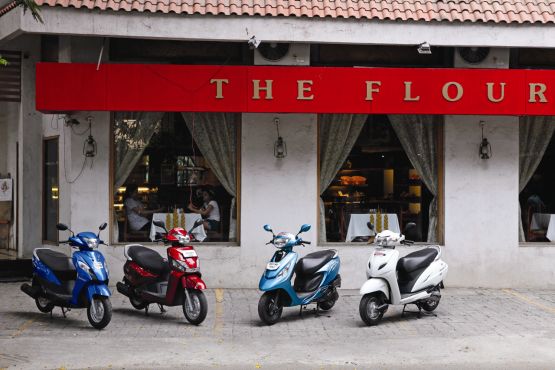 The other Jap in the ring is Suzuki’s Let’s. When it comes to looks, this one takes the cake. To be fair, though, the next bike on the list, the TVS Scooty Zest, does give it a tough fight, but for me the Let’s just shades it because it strikes a perfect balance between flash and class. It isn’t too boring and isn’t too garish either, and those sweeping lines that are consistent across the board lend the bike its drool-worthy quotient. This pose value is further accentuated by the consistent two-tonality of the body parts that encompasses the front fender, side panels and tail-end of the Let’s.

Legroom isn’t an issue either thanks to the shape of the front fender, although having a hook attached to the bike just below the handle means hanging anything there will occupy the space reserved for your knees. Where the Let’s really comes into its own is when you give that 112.8-cc engine a bit of a workout. Having the biggest engine of the lot, the Let’s obviously wins the power stakes with figures of 8.8 PS and a nine Nm torque rating. This translates into the highest top speed across the board – 93 km/h. The only performance-based stat that the Let’s loses out on is acceleration, where it comes in second at 9.58 s to get from 0 to 60 km/h. The engine-tinkerers at Suzuki HQ have got it absolutely spot-on with the Let’s. The acceleration is so linear that it can’t help but put a smile on your face, and reaching 90+ km/h speeds is effortless because the power is so well distributed across the rev range.

The ride quality is slightly stiffer than the Gusto’s and the Activa’s, which makes those bumps and potholes more annoying to traverse. It also makes the Let’s a dream of a handler, allowing you to drop it into corners with supreme confidence, and pulls out of corners with the grace and speed of a wild cat on the chase – a truly enjoyable bike to ride. The stopping figures aren’t so great, though, with a second slowest 3.18 s time meaning you can’t always exploit all that power. All that speed means the Let’s is the second quickest fuel burner, consuming a litre of petrol every 49.75 km. This lack of efficiency is offset by the price, however, as the Let’s costs the lowest of the lot at Rs 53,411 (OTR, Pune).