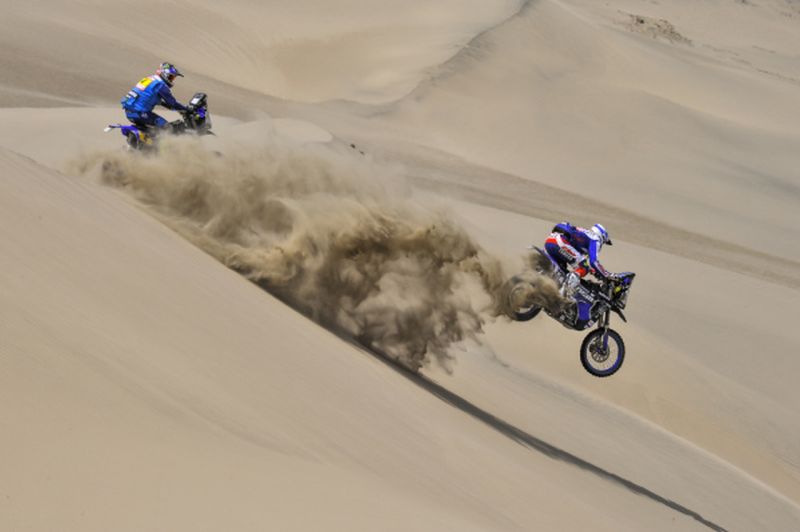 Our very own Indian manufacturers are making a big name for themselves at the fearsome Dakar Rally. However, not everyone knows what the Dakar is all about. We provide the answers.

Rally raids and rallies are not the same. Rally raid is the discipline that came about because some people felt intercontinental rallying was not long or tough enough. Let me introduce you to the race that established rally raid as a format that is now recognised worldwide: the Dakar (formerly known as ‘Paris-Dakar Rally’).

Currently in its 40th iteration, it has been ages since the race was conducted between the original Paris, France-Dakar, Senegal route. Incidentally, this year also marks the 10th time the Dakar is being held in South America. Currently in Dakar 2018, the competitors have powered through two out of the three countries (Peru, Bolivia, and Argentina) on the route and are racing across Argentina to the finish. When they arrive at the finish in Córdoba they would have covered almost 9,000 km. Thus far, the terrain was predominantly comprised of sand dunes and also had a section where they had to race at an altitude of more than 3,000m. Gruelling, to say the least.

Hero MotoSports joined hands with German off-road racing specialists, Speedbrain GmbH and made their debut at the Merzouga Rally in Morocco in 2016. The partnership seemed to work because they signed up for Dakar 2017 and produced a favourable result. For Dakar 2018, the team developed a new motorcycle that they claim is better than the 2017 model; the Hero 450 RR. 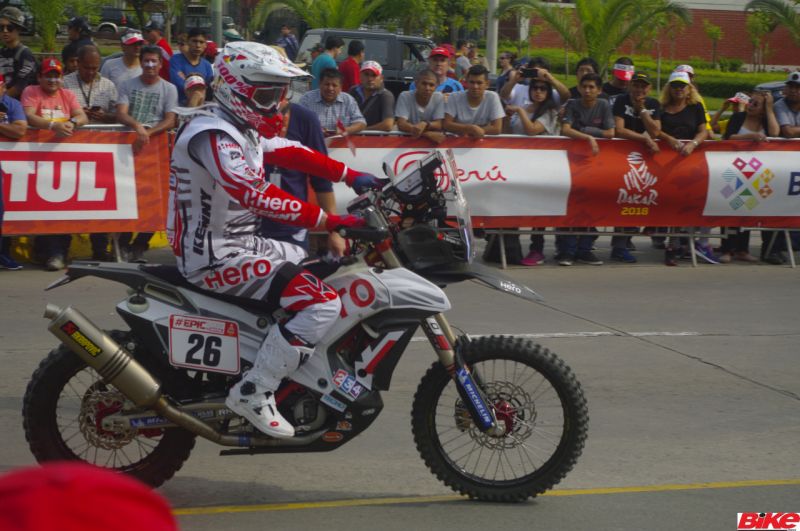 Joaquim Rodrigues: Racing on number 26, this 35-year old from Portugal is better known as J-Rod. He has more than 25 years of Supercross and Motocross racing experience. J-Rod made the choice to try his hand at Dakar for the first time in 2017 and signed off on a high note. He finished in 12th place; inspiring confidence in the Hero MotoSports camp. Although, he was in splendid form before the race, J-Rod ran into a spot of misfortune and suffered a fall in the midst of Stage 1. He was pulled out of the race immediately. A few hours later, the team confirmed that he would not be able to continue the race. 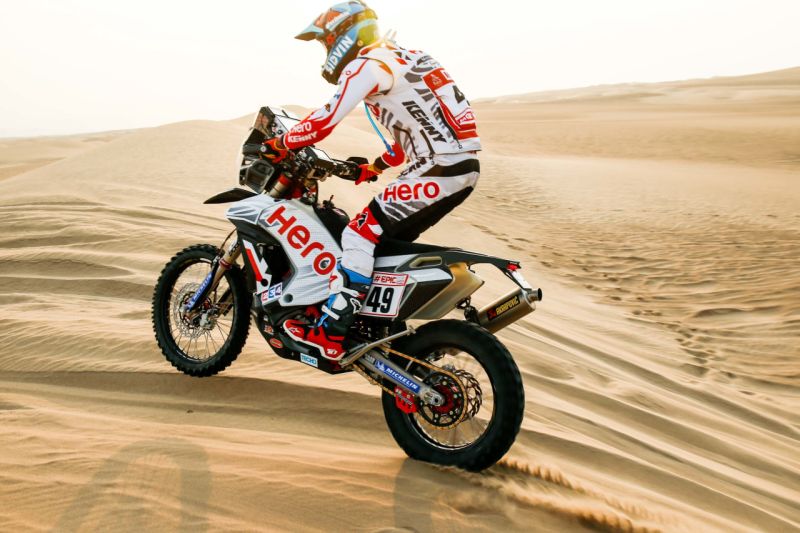 CS Santosh: Until a couple of years ago, the idea of an Indian racing at the Dakar seemed like a far-off dream until one man chose to brave the Dakar. In 2015, CS Santosh accepted the offer from Kini-Red Bull and became the first-ever Indian to participate in the Dakar. The following year, he returned once again with Team Suzuki Rally, Spain. Unfortunately, he was unable to finish the race that year. However, what he managed to do was catch the attention of Hero MotoCorp. In 2017, racing as part of Hero MotoSports Team Rally, he finished in 47th place. This year, Santosh had a dream start but ran into some trouble in the following stages. His mistakes and misfortunes included running out of fuel, losing the way, and a few crashes. Despite these setbacks, he continues to fight the Dakar with undying zeal. 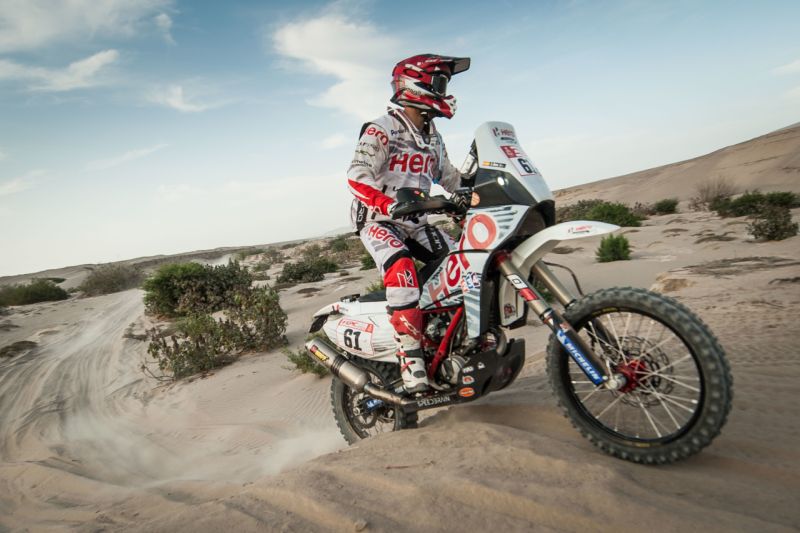 Oriol Mena: Mena is the latest addition to the team and the youngest rider in it. This 30-year old caught the eye of team scouts when he turned up at the Merzouga rally by himself and won a stage five days into the race. Unlike the top two riders, Mena is riding the 2017 motorcycle, and unlike the the top duo, Mena is currently at the fore. Looks like the Hero MotoSports team have struck gold with this one.

This team is the more seasoned of the two because they tasted Dakar for the first time in 2015. French and Spanish motorcycle manufacturer, Sherco, in association with TVS, developed the RTR 450 rally motorcycle that was seen in its 2018 avatar at Dakar this year. Juan Pedrero: Riding the number 12 motorcycle, Pedrero is the most experienced rider in the team with experience in the Dakar from 2009. His association with the team began in the 2016 edition and his 13th place finish in the 2017 Dakar is his best outing with the team yet. Although he has great pace at the moment, Pedrero also has to bear the pressure of being the only rider left in the competition from his team. Adrien Metge: The 31-year old Frenchman was introduced to Dakar in 2016 and caused quite the stir by claiming 11th place in his rookie year. In addition to his experience as an enduro driver, Adrien is the younger brother of Michael Metge, an accomplished Dakar rider himself. Unfortunately, this year’s Dakar did not turn out like he expected. In Stage 2, he had a crash that forced him out of contention. Aravind KP: The only Indian in the team, this was Aravind’s second year at Dakar. The previous year, the 32-year old ran into a bit of bad luck and sustained injuries during the course of the race that forced him to abandon it. Turns out his determination and grit were not enough to best the Dakar this year. Like his teammate, Metge, Aravind also was not fortunate enough to get back on the motorcycle after a bad crash. With a heavy heart, our Indian rider had to throw in the towel for this year as well.

Update on the current scenario (end of Stage 8):

At the end of the eighth stage only three of our six Indian team competitors remain in the competition. CS Santosh is the only Indian rider in Dakar 2018 at the moment and he continues to push on at 42nd place in spite of a few bad spills.

J-Rod was unable to finish the first stage and had to abandon the competition due to a back injury. Sherco-TVS riders Adrien Metge and Aravind KP also faced a similar fate, and bowed out of the competition.

Newfound-talent Oriol Mena is climbing up the ladder steadily and is currently at 17th position. Closely behind him, his fellow countryman, Pedrero is holding fort at 20th place. With less than four days until the finish in Córdoba, Argentina, let us wish these brave riders the best.

We are pleased to report that our Indian teams did not lose any more riders post the previous update and all three of them finished with great results. Topping the charts at seventh position is Mena, who has registered his best result in the Dakar yet and also the best result for the Hero team thus far. Slightly further down the ladder, Pedrero held the TVS name high as he brought home a well-deserved 11th place.

Our very own Santosh fought valiantly and claimed his best finish yet. At 34th place, he has set the benchmark for the best finish by an Indian rider at the Dakar.