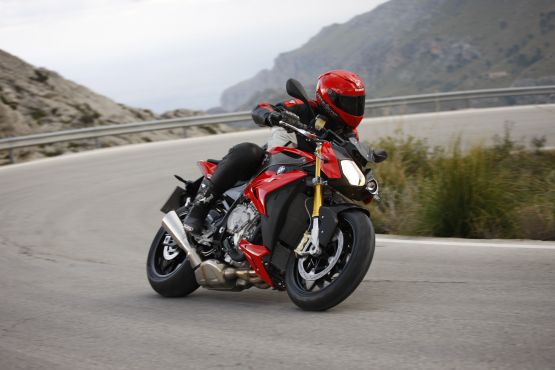 BMW have a few good reasons for taking so long over the S1000R. The bike is something special. That’s the impression we formed as we rode it recently.

The distance from the coffee stop to the lunch restaurant is only 32 kilometres, but the road from Sóller to the Majorca coast is so tortuous that there must be hundreds of bends. It’s fantastic fun on the S1000R: slicing into the turns, following a similarly mounted supermoto racer who is entering many of them with controlled skids; then accelerating out again with the BMW’s 160 PS engine providing the punch and its refined electronics helping to keep control.

Could we be riding any faster or having any more fun on another bike, including the S1000RR from which BMW’s long-awaited super-naked is derived? I doubt it. The S1000R has been four years in development, but you only have to ride it on a road like this to know that the wait was worthwhile and the bike is something special.

BMW have a few good reasons for taking so long over the S1000R. They’ve been busy developing a variety of models; four others at this year’s Milan show alone. They were also wary of treading on the toes of the K1300R, though that big bruiser is hardly the same type of bike despite its unfaired four-cylinder layout. Equally importantly, creating a lightweight naked sportster from the S1000RR involved far more than simply ripping off its fairing and bolting a flat, one-piece bar to the top yoke.