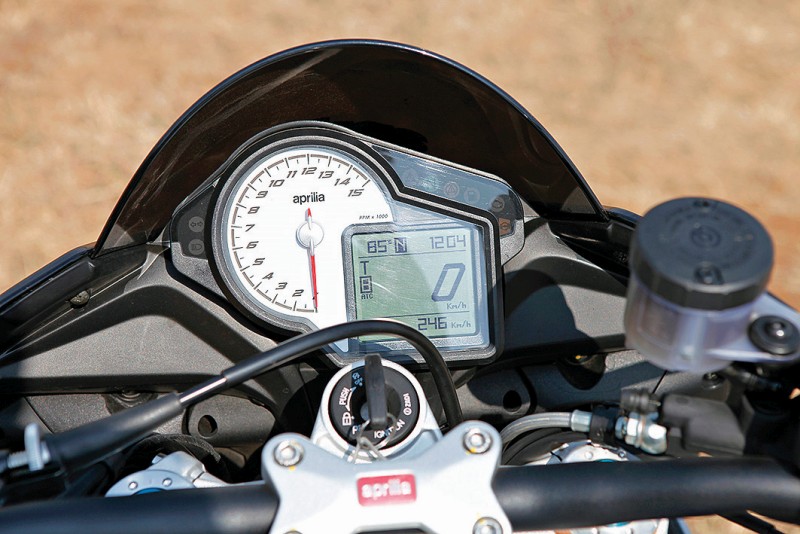 Jacket zipped, gloves and helmet on, half of both feet on the ground — thanks to the 825-mm saddle height — I thumb the starter. The V4 barks to life in two stages within less than a second before it’s rumbling away at a 1,500-RPM idle. Off we go, clutch action quite light for a big bike. First gear picks up faster than I’d have liked, second makes things better: it is quite a close-ratio ‘box. The TC exclamation mark also didn’t light up after that. Quite a feeling of accomplishment. One hint of the quarter-turn of the throttle and the Tuono 1100 goes from 50 to 80 km/h in a blink.

It does take some getting used to, the Tuono, and 175 PS is a lot of power for an upright street-bike. That said, once you get familiar with the throttle response and levels of grip, it’s a breeze; a breeze at reasonable speeds and revs, of course. Whack the throttle open and all hell breaks loose: 100 km/h comes up before you can blink twice and in a few seconds the Tuono was doing 150. Even so, the suspension felt very reassuring and the brakes were über-responsive: three-level ABS not really needing to kick in also speaks volumes. 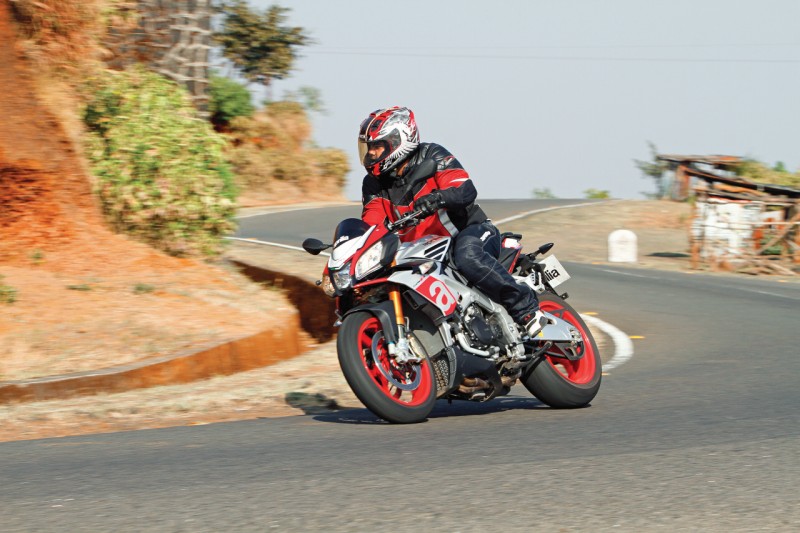 Heading to the hills, the speed humps en route made no contact with the underside and as the corners got faster, any questions about the Tuono’s agility were obliterated. Even for a 190-kg bike, it simply flows into the bends with the slightest of inputs, almost telepathic in response. The stiff-ish rear suspension holds well and over broken patches of road the throttle sound broke off with the TC lights flickering in split-second intervals every single time the wheel lost contact with whatever tarmac was on offer. Still there were hardly any anxious moments. When riding on Indian roads, visibility is a key factor, directly proportional to anxiety in the experience. Tight hairpins dealt with at 40-50 km/h, yes, but when the next pair of esses showed themselves devoid of any activity, it was hard on the throttle, the Tuono snaking through the bends with ease.

Many choose the sleek looks of a supersport motorcycle, but the committed riding position is something I can’t live with every day. A naked street bike with a precisely calculated handlebar position, such as this, can be wonderful. It’s comfortable and capable, and there are only a few big street-bikes that can be taken to the track and feel just as exciting. Aprilia also tell me the service interval is 10,000 km after the mandatory 1,000-km first service. Take to the track and they say 5,000 rather than 10. At Rs 21,05 lakh (OTR, Pune), it costs a bit more than other naked fours available, but the Tuono V4 1100 Factory is the Italian brute to choose if you want the one from Rossi’s original backyard. It’s a lean, mean, bonkers machine, tamed only by electronics and the experienced rider.