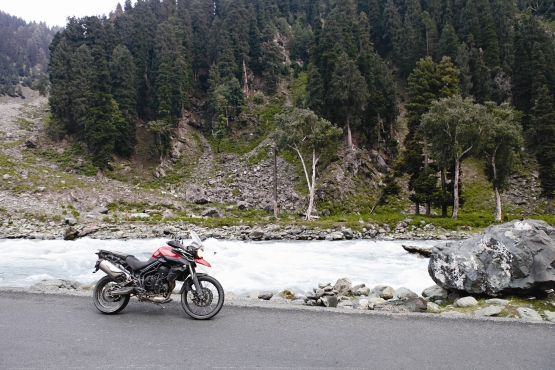 As you exit Srinagar, the roads get a bit wider, or so it seemed. Maybe the traffic thinned so suddenly. Heading out towards the hills towards Sonamarg made me quiver with anticipation. Going down the Srinagar-Leh highway, the sound of a river was becoming clearer, the air was getting crisper, the greenery was getting denser and the trees taller with every passing kilometre.

The Deodar tree is indigenous to this region and, with a ban on lumbering in effect here, the view soon filled with tall shades of dark green. The smooth but winding roads, the Sind river right alongside and rocky mountains on the other made for a frame-worthy picture. When we stopped to capture the moment, it was serenity being handed to us on a plate. Save for the occasional tourist bus or two, there was no movement and the sound of gushing water dominated the senses. The trees were much taller than I first thought and it was only the mountains behind which dwarfed them. There were also a few horses not far from the road, wandering free over the lush green grass just beyond the river.

As we got closer to Sonamarg, the mountains appeared to drift away from the road and the river became ever wider. Open spaces strewn with rocks and boulders began to emerge, and soon we caught sight of some tents. Sonamarg, or ‘meadow of gold’, is an adventure-sport hub and trekking, hiking and river-rafting are on the cards. It is also a base camp for the Amarnath Yatra. 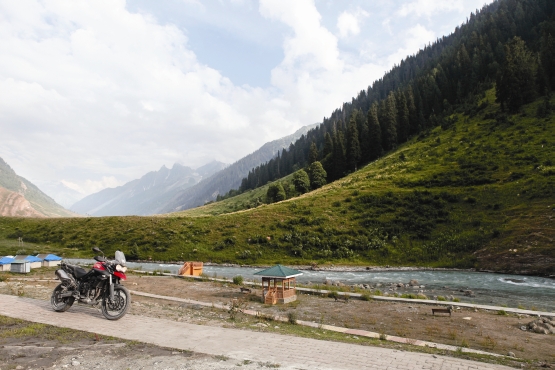 The scenery continued with only a handful of dwellings in sight, with vacant green spaces all the way till the dense forests in the background. White smoke emanated from some of the chimneys as we made our way past the little village, going over a road which seemed to climb higher with each corner. The air was getting cooler and soon the heights we would scale came into view. The forest cover had given way to mud and rocks and the elevation change was more than evident. Zoji La, the first pass on the Srinagar-Leh highway, was right before us.

Situated at 11,575 feet above sea level, Zoji La is one narrow pass, especially when compared to the other passes, should one choose to go up from Manali, via Rohtang La, Baralach La and Tanglang La. Also Zoji La was just dry sand and rock at this time of the year. The roads, or paths, to more aptly describe the conditions, were nothing but loose sand, gravel and sharp stones. The easiest thing to do there would be to get a puncture, or simply cut a tyre. Even so, the Tiger trudged on, turning a blind eye to the potentially disastrous surroundings with its Bridgestone Battlewings doing their best. Just getting on with the job, then, until, roadblock. Seemingly, a landslide had thrown a spanner in the works. Workmen were busy moving around and dust filled the place as far as we could see. 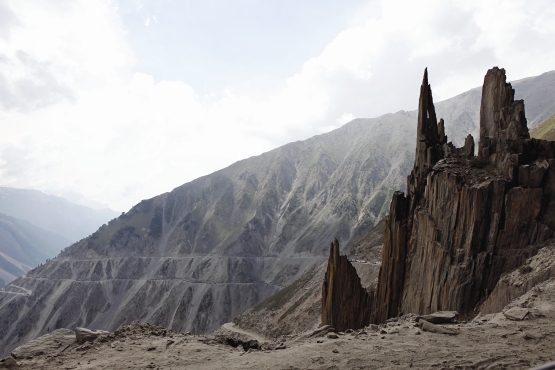 Massive shards of rock were all there was and it looked like the surface of another planet. It was an astounding sight, but, at the same time, it was also an excruciating wait; four hours to be precise – 240 minutes doing zero km/h – incredibly frustrating. When it finally was time to get a move on, the traffic was bad, and the funnelling had begun. Three lanes became one; the same was the case with oncoming traffic as well. The military police were also present, which made things easier, because, with the Tiger following their patrol vehicle, it was a cinch getting out of the whole jam.

Once we were through, however, the road downhill was an absolute thrill. Not only did the traffic instantly become a thing of the past, but the road grew wider and straighter and the landscape changed from rocky mountains to green plains, full of grass, sheep and horses. A massive board welcomed us to Ladakh. Leh was just over 300 km away now. However, before that, we had Drass and Kargil to visit. 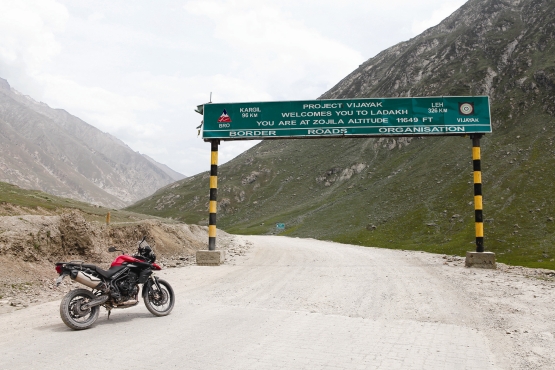