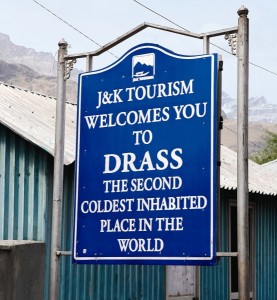 Drass is a little town about 50 km from Kargil. We thought it was a quaint little sleepy village till we spotted a board which stated that it was the ‘second coldest inhabited place in the world’. Apart from giving me the chills, it really made me wonder how it must be like to actually live there. Seeing the people going on with their lives and little children playing near their houses in what was once a war-torn region makes one realise how so many take so much for granted. I wish I could have stopped and shared some time with the children there, but we had to push on. 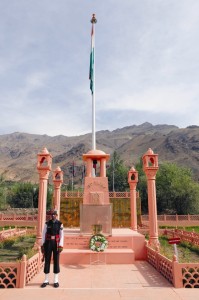 The Kargil War Memorial, built in honour of the soldiers who made the ultimate sacrifice in the war against Pakistan 15 years ago, stands as a reminder for those in the present. The line, ‘They gave their tomorrow for your today’, inscribed in stone, is rather haunting. The Memorial grounds are set amidst the then battle zones, with Tiger Hill and Tololing, where encounters took place, standing tall in the background. The sprawling lawns make it hard to believe that this was once a battleground. Walking past some sunflowers, we came across the final resting place, goosebumps. The gravestones were many and as we read the inscriptions on stone, we couldn’t help but have an overwhelming feeling of patriotism.

On a lighter note, the War Memorial also has a café and gift shop. A quick bite later, we were on the road to Kargil. The Sind was right alongside as we approached Kargil with the sun beginning its journey to the other side of the world. Kargil is a busy town, but for some reason, we didn’t want to spend too much time there; we had to get on to Leh first thing in the morning.

Our hotel, oddly called Zojila Residency, was quite a hub of activity at dinner time. We also bumped into a German rider named Carl. At 67 years old, he’s travelled for more than 30 years and has made his way across Russia, Laos, Japan, Thailand and India, where he began in Chennai, visiting the Ajanta and Ellora caves, Varanasi, Darjeeling en route and was now heading from Srinagar to Leh on his German adventure touring bike. 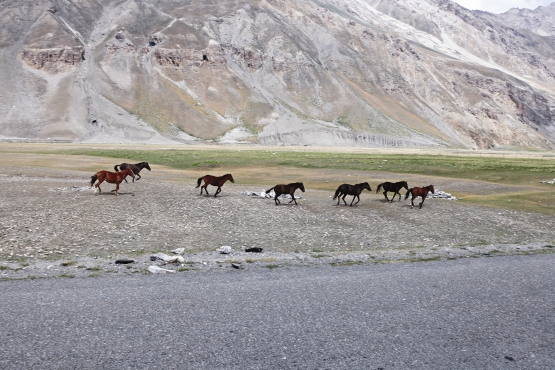 Early next morning, we set off towards Leh – a destination we were all looking forward to – just over 200 kilometres away. The Srinagar-Leh highway is a crucial connection not just between the cities but for the Indian Army as well. As we had seen earlier, Army personnel carriers were a regular appearance in this section too. The road out of the city is not far from the hotel. In fact, just one bridge over the river and the road began to wind and climb into the mountains. There is a lot of greenery alongside and civilisation continues to be a part of the landscape for some time out of there. A bunch of riders from Pune were also making their way up that very road. The MH 12 number plates were an instant giveaway, and they too waved out excitedly, even more so when they noticed the ‘Bike India‘ stickers on my helmet.

The roads at that point were broken and not very good, not like what we’d become used to. And then they narrowed even further as a little town came into view – Mulbekh. A quiet little town, Mulbekh is an incredibly beautiful place and is rich in fields of green. The early morning sun was lighting up our surroundings to the point where I just wanted to stop and go wild with the camera. However, there was distance to cover and enticing roads ahead. The mountains were just beyond the town and the open roads were too much to resist. Onward then, the Tiger’s triple howled as I twisted the throttle and gave it an early power breakfast of petrol and fresh mountain air. There wasn’t a soul stirring for miles and, with no Army convoy in sight, I figured it was time for the Tiger to really munch some miles. The rev-counter climbed with an intoxicating howl and soon I was doing triple-digit speeds with a wide smile plastered on my face.

Soon enough, barricades and Army men were coming into view ahead and I had to squeeze those Nissins and shed some speed quick. They weren’t really concerned with me, though, and let me pass, but not before they had an eyeful of the Tiger. The distinct engine sound does grab more than its fair share of attention. I was back on the open road again. The climb had begun once again and the mountains were beginning to look less peaky and more curvy. What first came to mind was a massive lion made of sand, peacefully resting as he would after a good meal in the African Savannah.

The roads were unbelievable – smooth ribbons of tarmac with flowing corners and an equal dose of blind corners too. The Tiger was an absolute joy. Its ability to simply flow into a corner and then dart out of it, holding its line and pace, makes it a joy in the twisties. Shift down to third, drop down to 60 km/h, slightly lean in and the next thing you know, you’re shifting up and gunning it, exiting the corner and flying towards the next one. 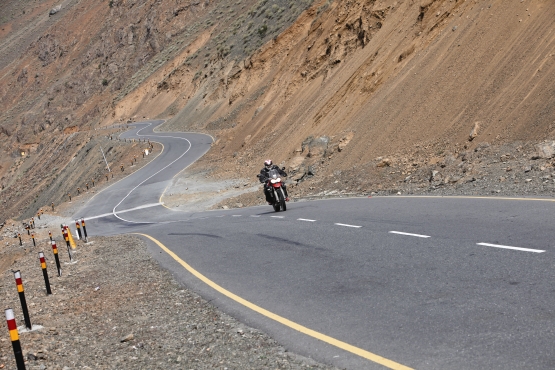