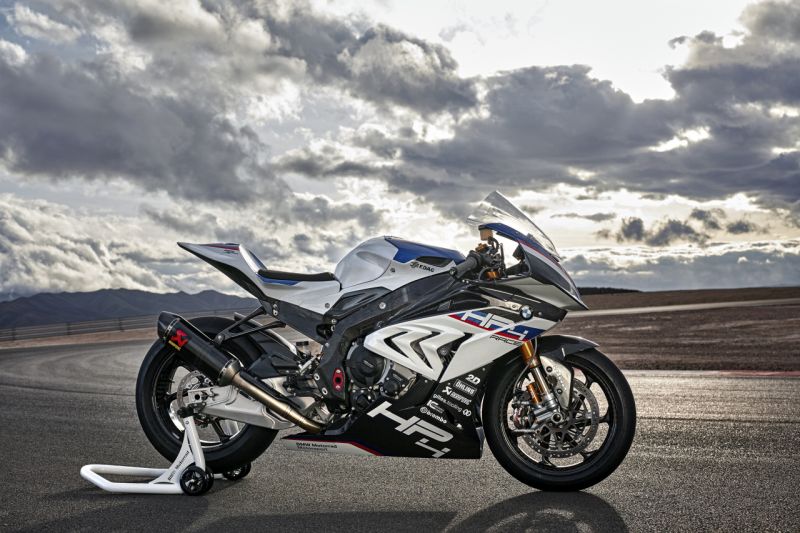 As we reported in November, the BMW HP4 Race has been launched. This motorcycle is BMW Motorrad’s entry-ticket into the exclusive hypersport club.

The HP4 Race will be crafted by a small, specialised team ensuring the highest levels of quality. This motorcycle is aimed at becoming a pure-bred racing machine that has some serious prowess on the racetrack. As with the Ducati 1299 Superleggera, this Beemer has been put on a strict diet. Weighing in at 171 kg when fully-fuelled and ready, it is lighter than some of the factory racing machines used in the WSBK and slightly heavier than a MotoGP motorcycle. Wondering what the dry weight is? A puny 146 kg – four kilograms lighter than the fire-breathing Ducati 1299 Superleggera.

BMW are the first manufacturer to produce a carbon-fibre monocoque frame. The entire frame weighs only 7.8 kilograms and the engine is a load-bearing member. Powering the HP4 Race is the 999-cc, in-line four which has been tuned to redline at 14,500 rpm as opposed to the 14,200 rpm made by the BMW S1000RR. It produces a mind-boggling 215 PS at 13,900 rpm and a maximum torque of 120 Nm at 10,000 rpm. The performance is supplemented by an Akrapovič four-into-two-into-one full-titanium WSBK exhaust system. The power-to-weight ratio is a whopping 1473 PS/tonne (picks up jaw off the floor). All this power is harnessed using a six-speed racing gearbox (EVO) with closely-spaced gear ratios. The front and rear wheels are also made from the same material as the frame. The motorcycle shares suspension and braking equipment that are on par with the machines used in the Superbike World Championship.

Electronic rider aids include Wheelie Control, Launch Control, Pit Lane Limiter, Engine Brake EBR, Dynamic Traction Control and a 2D dashboard with a transferable data memory (2D logger). BMW Motorrad are yet to release the price for this beast. Don’t get your hopes up though. Only 750 motorcycles will be made, so getting one is not going to be easy. We expect it to be priced close to Rs 56 lakh in the Indian market.