The BS6 TVS Apache RTR 200 4V was launched along with the BS6 RTR 160 4V a few months ago and now that the lockdown restrictions are gradually being eased, we got a chance to put it to the test on our roads. 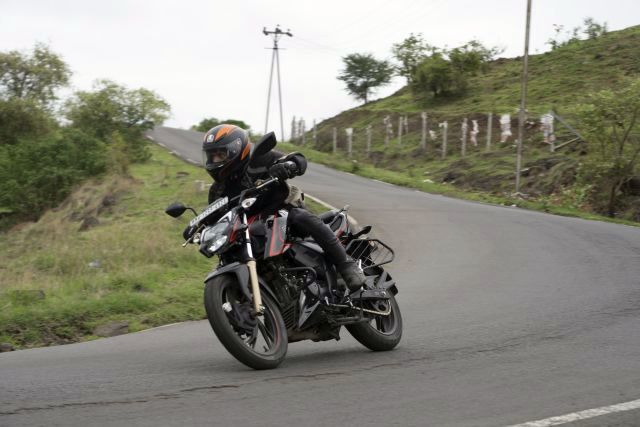 Before the RR310 came into existence, the TVS Apache RTR 200 4V was the most powerful offering under the brand’s Apache series. Since its début in 2016, it has been a favourite among motorcycles in the 200-cc segment in India. A factor that appealed to many customers was the aggressive price tag that the bike carried compared to the other offerings in the 200-cc segment. The RTR 200 4V is also used in the manufacturer’s One Make Championship and as a training motorcycle at the renowned California Superbike School (CSS), where it proved to be a stunning machine to learn on with the way it handled.

The main visual highlight of the BS6 TVS Apache RTR 200 4V is the use of an all-new LED headlight unit with eyebrow-shaped daytime running lights (DRL) in the front. This unit is now slimmer but wider than the one on the BS4 model. Other small details that have changed include a set of new panels that extend from under the tank and new claw-shaped mirrors with carbon-fibre finishing. All these new design elements have led to the bike taking a more muscular stance. It is offered in two colour schemes: Gloss Black and Pearl White. The new sporty graphic stickers are red stripes outlining a carbon-fibre finish, giving the bike a more premium look than before. Apart from these, the motorcycle retains the same tank design, split-seat layout, and the bodywork at the rear. With the BS6 transition, it was expected that there would be an increase in weight and the bike is now four kilograms heavier than its predecessor with a kerb weight of 153 kg, but this will hardly be felt by a rider. 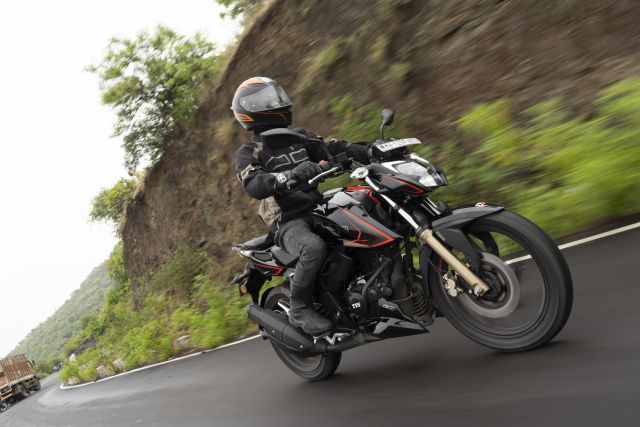 What makes this perfect for city riding is the easy, upright, and compact riding position thanks to the clip-on handlebars that are set high, a comfortable seat, and the well-positioned foot-pegs. To switch things up for a weekend ride, this set-up also allowed me to comfortably shift into an aggressive position simply by moving to the rear of the seat and tucking down.

Powering the new RTR 200 4V is a 197.75-cc, single-cylinder unit that puts out 20.5 hp at 8,500 rpm and 16.8 Nm of peak torque at 7,500 rpm. Compared to the BS4 model on paper, there is a drop of 1.3 Nm in the peak torque figure. The BS6 engine makes use of two catalytic converters — one positioned at the beginning of the bend pipe and one placed in the silencer unit. The first thing we noticed was the new feather-touch start button that immediately fired up the engine with a sporty exhaust note. The acceleration of this motor is smooth through the rev-range and the throttle gives a quick response. Shifting through the smooth five-speed gearbox is almost effortless. The slipper-clutch paired with this engine allowed me to aggressively downshift even two gears without the rear wheel locking up.

With a cleaner BS6 engine, the bike is smooth but the performance figures have slightly dropped. Our test figures indicated an acceleration time of 8.03 seconds from 0 to 80 km/h and 13.64 seconds from 0 to 100 km/h. In comparison, the BS4 model was able to achieve 0 to 80 km/h in 7.16 seconds and 0 to 100 km/h in 11.93 seconds. The indicated top speed in fifth gear is 135 km/h but the true speed during our testing session was 120 km/h. This top speed makes the motorcycle five km/h slower than the BS4 model. 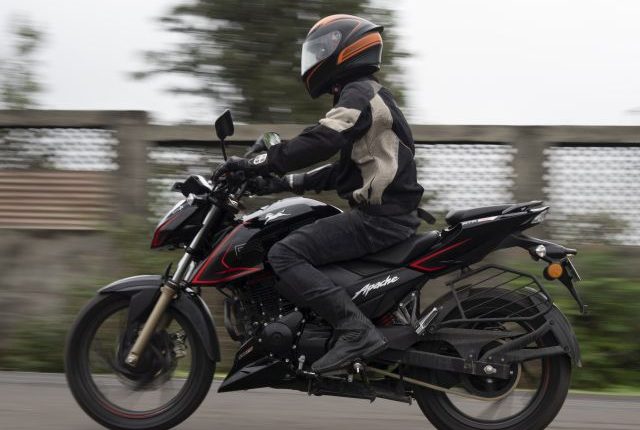 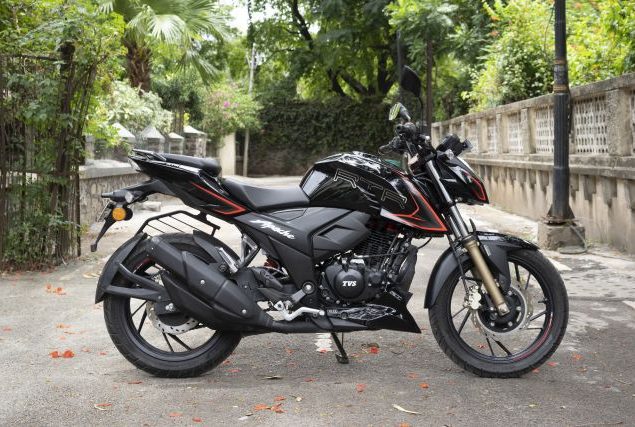 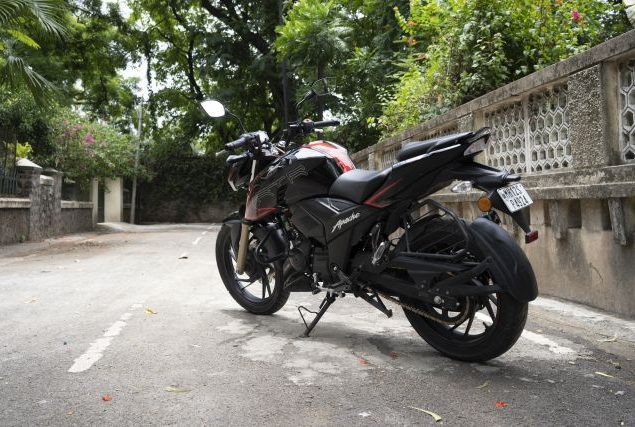 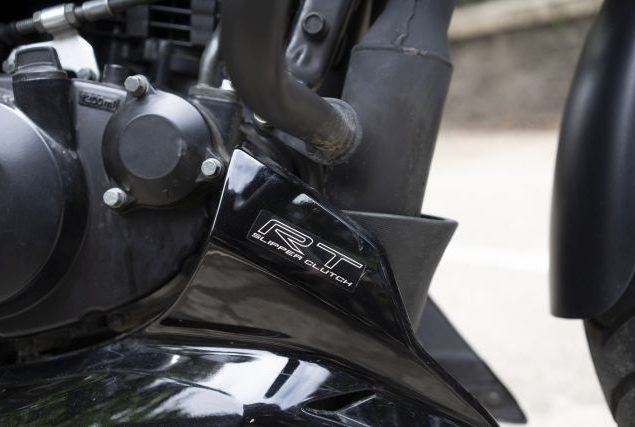 While riding in the city, the Glide Through Technology (GTT) feature is efficient and works well to provide torque assist as soon as the clutch is released, maintaining a minimum speed in each gear. This reduces the chances of stalling in stop and go traffic. While cruising in the city, fourth and fifth gears can be used while travelling at low speeds of between 40 km/h and 50 km/h without any misbehaviour on the part of the engine and also for swift overtakes. The sweet spot to cruise on this motorcycle is in the mid-range between 4,000 rpm and 5,000 rpm.

The suspension set-up consists of telescopic forks at the front and a monoshock at the rear. This is a slightly firm set-up that manages to tackle most of our bad roads and speed-breakers without upsetting the stability of the motorcycle. Doing grip duty at the front is the same Remora tyre from the BS4 model, while the rear has been fitted with an all-new radial tyre from the TVS Eurogrip range. These work perfectly while planting the bike into a corner and giving more confidence to lean lower and power out of a corner. The combination of the tyres also offers an impressive grip in wet conditions.

Braking from 80 km/h to a standstill is achieved in a distance of 31.29 metres and it takes 2.78 seconds. The BS4 model, in comparison, stopped within 33.14 metres and took a time of 3.07 seconds. This shows that the brakes on the BS6 model have been slightly improved. Petal discs are used at the front and the rear with dual-channel ABS. Of the two, the front brake responds well even when suddenly applied and quickly brings the bike to a halt. When the rear brake is suddenly applied, a slight intrusion from the ABS is felt but this can be countered with the seamless slipper-clutch that cuts down the speed with engine braking. TVS have also said that the motorcycle gets a feature called RLP (Rear wheel Lift-off Protection), whereby even under hard braking the rear end will stay in contact with the ground. Although, considering that this is a 200-cc motorcycle equipped with ABS, it is unlikely that the rear end will lift up while braking hard.

To complete the package, TVS’ SmartXonnect technology is part of the electronics package that works via Bluetooth. This feature has a lot of implications but it was complicated to get it working for the first time. Basically, this feature will take some getting used to. Further adding to the sporty nature of the bike is the use of a lap-timer as well as a lean-angle sensor. The latter works with the help of the gyroscope in mobile phones, so for this to accurately work, the mobile phone will have to be put in an upright pocket at all times. In conclusion, the RTR 200 4V offers the best of both worlds — a commuter for the weekdays and a corner-carving machine for the weekends. Offered in only one variant and with prices starting at Rs 1.24 lakh (ex-showroom), currently it is one of the cheapest 200-cc BS6 motorcycles on sale in India.