We participate in the fourth edition of the TVS Young Media Racer Programme and get to live the life of a racer for three action-packed weekends. 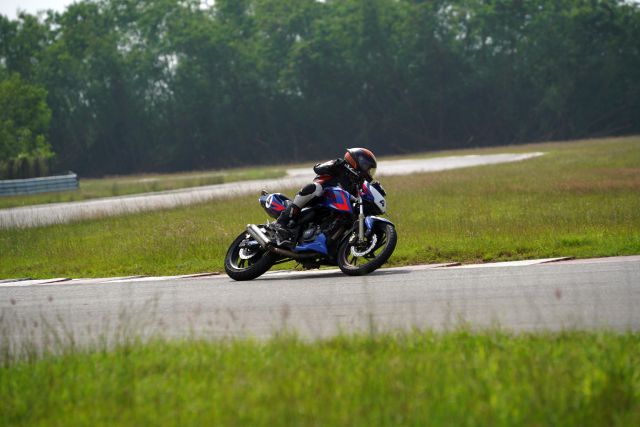 The TVS Young Media Racer Programme is a one-of-a-kind event wherein young media journalists below the age of 30 vie with one another to compete in a championship. To many of us, this was a dream come true and an exciting way to get a taste of how it feels to be part of an actual bike racing championship. This two-race championship took place alongside the Indian National Motorcycle Racing Championship (INMRC) races and gave us an opportunity to feel like professional racers, while also learning about the dangers of the sport.

We can all admit that this year hasn’t been a good one, but that changed for me when my editor gave me the good news in November. I had looked forward to this event ever since I saw my colleague, Zal, participate in last year’s edition of the championship. My obsession with motorcycles began as a kid, watching MotoGP races when Valentino Rossi was at the peak of his career, stacking up trophies and championship titles. This had inspired me to learn more about the sport and my inner fanboy was always craving for a taste of what it would be like to live the life of a racer. 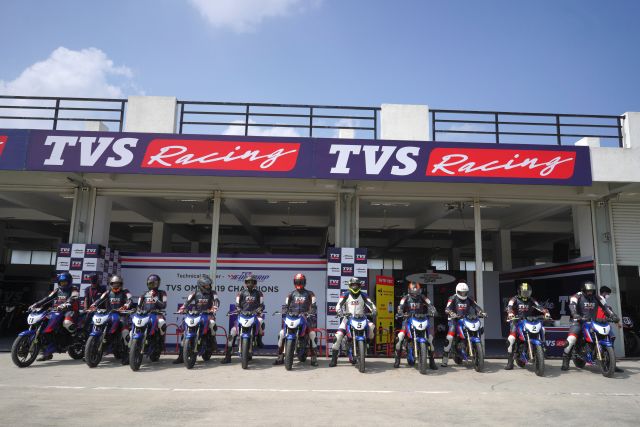 The first weekend was all about TVS Racing bringing us down to the MMRT in Chennai for a training and selection round. A few of us, including me, have already had the privilege of attending a riding school, but this time it was about a lot more than just riding. To participate in a race, there are many intricate details that we would have to watch out for. We were all going to be astride a race-spec TVS Apache RTR 200 4V — a motorcycle that I have been lucky to have had experience with as it was the first-ever bike that I got to ride on the very same track when I attended the California Superbike School (CSS).

Harry Sylvester, a former TVS Racing rider, was in charge of conducting our classroom sessions, while Jagan Kumar and K Y Ahamed were our instructors on the track. All of the basic teachings like racing lines, body position, braking, and vision drills were covered with us after which came the crucial elements such as racing flags, things we should always keep in mind while on a racetrack, and the rules and regulations that need to be strictly followed. 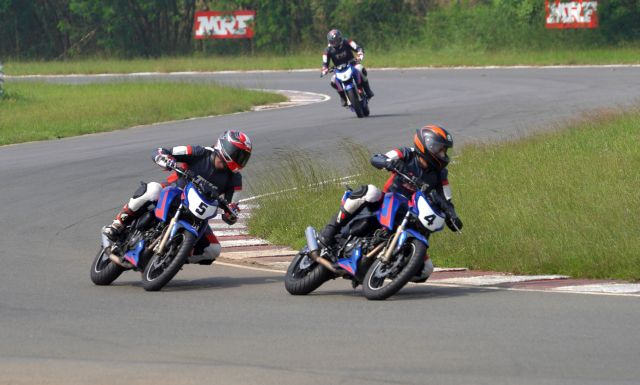 Another thing that we were taught and allowed to practise was race starts — something that not all riding schools will cover, since it is a skill that is only required for professional racing. The second part of the day was when all our competitive spirits were ignited. We were given a 20-minute session to set the fastest lap that each one of us could and this would determine if we were ready to race in the championship. In this session, I put all the teachings to use and managed a time of 2.27, which placed me fourth in the standings. Considering the fact that I had never been a competitor on a track before, I was happy to be where I was but I also knew that there was a lot of room for improvement.

Round One
We arrived back at the racetrack two weeks later, where a proper race weekend had been organized for us. Saturday had a 25-minute practice session followed by a 15-minute qualifying round, while the race itself was scheduled for Sunday afternoon. Because of the previous weekend, all of us had our game faces on and were ready to make the most of this once-in-a-lifetime opportunity. 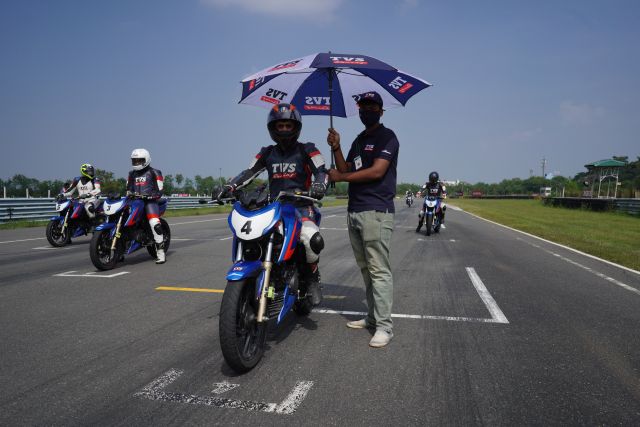 The practice session helped me familiarize myself with the track once again and allowed me to push harder to find the limit on every part of the racetrack. In the qualifying session, Sunny surprised all of us with a stunning timing of 2.12.881 and qualified first for the race. He was followed by Zaran and Vishal in second and third place respectively, while I qualified in fourth place with a time of 2.21.104 — an improvement on the previous weekend but still a lot of work to be done.

Race day was probably the most anxious I have ever been. The feeling of heading out of the pits for the formation lap to the start/finish line for the race is something I can’t put down into words. With my heart racing, I warmed up the tyres, hoped for the best, and silently stood fourth on the grid. After a wait of 10 minutes where the start procedures commenced, the lights went off and the race began. I was able to get a flying start and moved into second place before the first corner. Zaran got an even better start from the first row of the grid and was leading the pack. I got into a duel with Vishal where we exchanged positions on the first two laps. While we were fighting for second place, Zaran increased his lead and was way ahead of all of us. On the last lap, a small mistake on my part allowed Vishal to pass me on the last sector of the track and claim second place. I was disappointed with myself for making such a silly mistake but happy that I was able to finish the race on a podium spot and better my timing to 2.19.628. 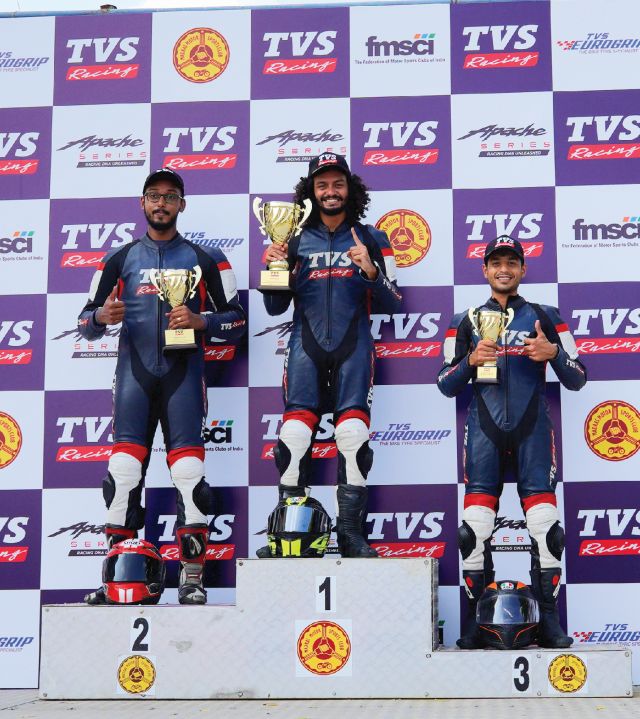 Round Two
I came back for the second round hoping to improve even further, but Saturday was just not my day. A problem with my motorcycle meant that I was lagging behind in the practice and qualifying sessions and posting lap-times even slower than the last time. I knew that I had the pace to qualify among the top three, but, hey, this is all a part of racing. Because of the mechanical problems with my motorcycle, I qualified sixth on the grid. After expressing my concerns, TVS allowed me to use a different motorcycle on the race day, but I would have to work my way up from sixth place.

When the lights went off, I knew that I would have to push like I never had before because of my unfortunate qualifying. Being lightweight, I knew that I had an advantage on the straights and got a perfect launch to gain two positions before the first corner. Vishal was in my sights in third place as I saw Anis getting away in second place. There was no time to waste, so a quick move had to be made. After tailing Vishal for a few corners, he left a gap that I just couldn’t resist taking. Moving up to third place from sixth itself was a big achievement personally, but now it was about finding out where I could be faster. Once I knew that I had pulled away from Vishal, there was no pressure on me from behind, so I concentrated on closing the gap to Anis in second. I reached a point where he was right in front of me and tried making a move in a couple of places, but the gaps just weren’t as wide as I needed them to be. Finally, after five laps, I crossed the line in third place, just 0.2 seconds behind Anis. Vishal, Anis, and I were tied for points and it was decided that Vishal was second in the championship standings as he had more points in the first race, Anis third as he had scored more points in the second race, and the championship winner, Zaran, who was the fastest among us, winning both the races of this championship. 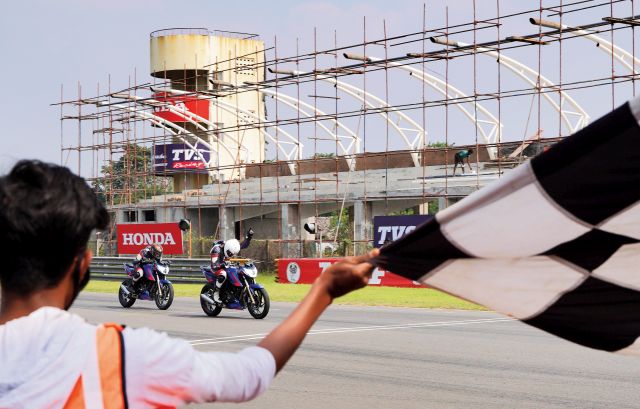 I might have lost out on the championship podium spots, but I was thrilled to know that in this race, I posted the fastest lap-time of 2.15.409. It was a crazy time battling it out with all the young media journalists and it was an experience I would forever remember. We might have been competitive on the track, but when we weren’t, we were helping each other out like teammates in the TVS Racing pit-box. I learned a lot about the ups and downs of racing with this first-hand experience and look forward to many more track-days in the future. 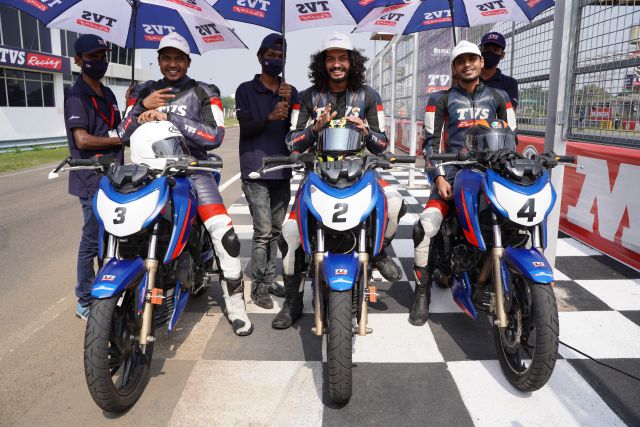 The highlight for me was cutting down just over 12 seconds from my lap times over a span of these three weekends. This was a great way to end the year and has also made me so much more confident riding on the track. I would like to thank TVS Racing for organizing this event and Bike India for nominating me to represent them in this championship.