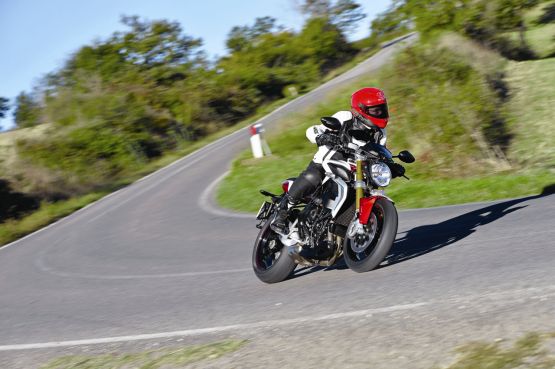 “That investment will be in the four-cylinder platform, which we’ll renew completely. Not just in the Brutale and F4; we’ll move to a complete model range like we did with the three-cylinder bikes. So we’ll have 600 cc up to 1,100 cc, with a model in all the categories.

“We’ll still invest in the three-cylinder models, you’ll see at EICMA. As well as these RR models there will be a completely new model, a small tourer for city commuting, as well as the final version of the Turismo Veloce that we presented last year as a concept.

“We’ll also show a new super-sport model, the F4 1000 RC, standing for Reparto Corse [Racing Department]. This is the bike we developed to race next year [in World Superbike]. Next year the rules change, so all the major players will decrease power to close to Superstock rules.

“We’ve been working hard to make a bike that will start from a much better position. This bike makes 210 PS and weighs 175 kg. It has a new cylinder-head, lighter crankshaft, bigger fuel injectors, magnesium covers for the engine, and full titanium screws for the engine and chassis. You might think that sounds like nothing, but just a set of titanium screws for this bike costs something like €3-4,000 (Rs 2.3-3 lakh).

“The RC also has carbon-fibre wheels, top suspension and so on. We’ll build 250 units and sell them to our best customers. Due to the FIM regulations it will have a price slightly below €40,000 (Rs 30.5 lakh approx), which is the price cap [for World Superbike homologation]. It’s a collector bike, a pure racing bike, and it’s fantastic.”