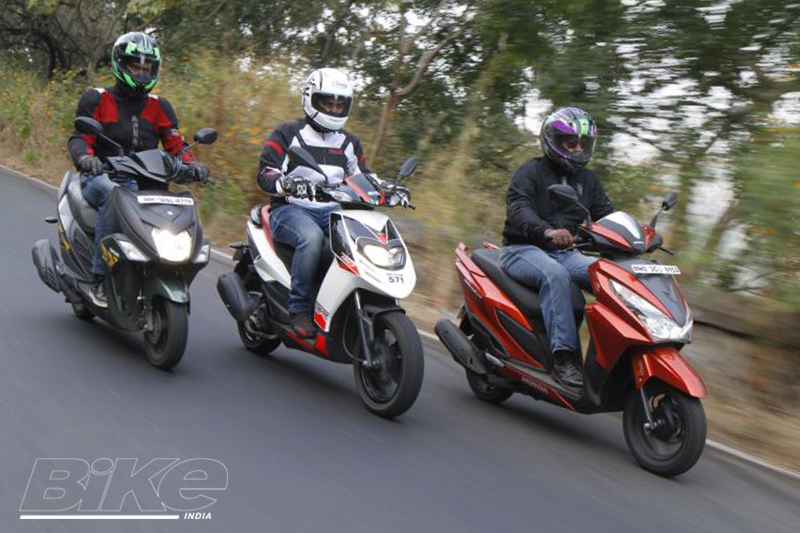 The performance test revealed the mettle of each scooter. The Aprilia is a hoot to ride and keeps pushing the rider to go faster. Which isn’t the best idea while riding through busy city streets, but we have to admit sheepishly that its nimble handling makes it too much fun. It feels at home in the city as it does on the highway. While going fast, just tip it into a corner and it remains surprisingly composed, almost like a motorcycle. More importantly, it doesn’t fishtail during hard braking. The chink in its armour is that it tends to feel a mite too firm and bounces over bad road surface. The other downside is that the SR may sound too gruff to some, which is a compromise for the sporty performance. 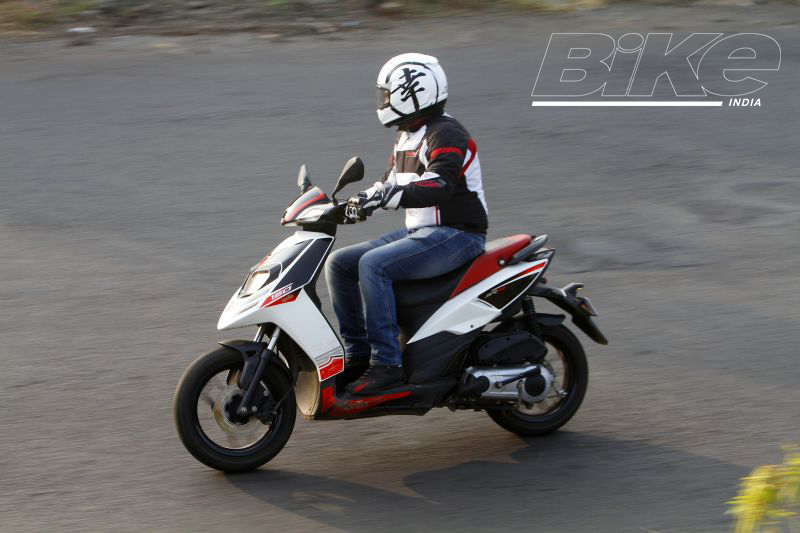 The Ray ZR might not have the number game in its favour, but the engine feels more refined than the Aprilia’s and the ride quality is far more compliant and comfortable. Initially, the CVT takes a little longer than expected to get going but once it gains momentum, it makes the speedo climb quickly. The Yamaha feels most comfortable cruising between 50 and 70 km/h, beyond which the performance drops and feels strained. Although the engine remains free of vibes, the plastic body panels let out a light rattle at higher speeds. At 103 kg, it’s the lightest among the trio here and is extremely flickable, making it perfect for negotiating city traffic. 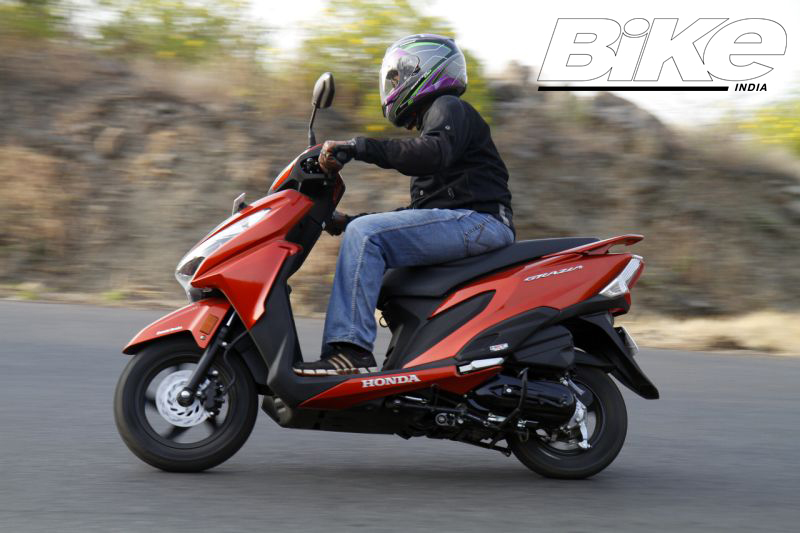 The Grazia weighs slightly more, at 107 kg, and feels more agile and peppy than the Activa 125. Twist the throttle and it’ll surprise you with immediate response. This Honda is quick to gather momentum and briskly crosses the 80-km/h mark. The engine refinement matches that of the Yamaha, if not better, as there’s hardly any NVH even at that speed. The highlight is its wide powerband between 40-80 km/h which is all you need for daily urban riding. The ride, thanks to the telescopic forks, is a lot more forgiving than the SR’s and over severe bumps feels even better than the Yamaha’s. The SR 150 and Ray ZR both have a taller seat height of 775 mm, as compared to Grazia’s 766 mm. So, most Indians will find the Honda to be slightly better in terms of ergonomics. It also has a softer seat and feels more comfortable during longer rides. 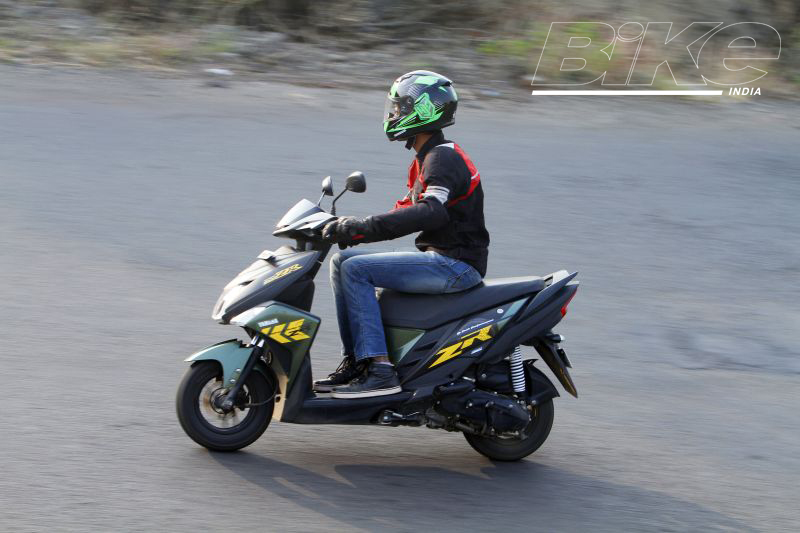 In terms of fuel economy, the best we could get out of the Yamaha was 64.38 km/l on the highway. The Grazia returned 63.84 km/l, while the racy SR 150 gave 48 km/l. If you ride predominantly within the city, then this figure will drop drastically as you will struggle with bumper to bumper traffic.

If performance and riding dynamics is what you are looking for, then the Aprilia SR 150 is the best gearless scooter available in our country currently which you can buy without making too deep a dent in your pocket. If I were to buy a scooter today, this would be it. But the trade-off could be a deal breaker for many ― such as its limited practicality due to the narrow footboard, shallow under-seat compartment and a compact seat, not to mention the firm ride and gruff sounding engine.

The Yamaha is a whole Rs 11,000 cheaper than the SR 150, which is priced at Rs 69,146 (ex-showroom, Pune). In the age of EMI and bank loans, the price difference might not deter the buyer too much. The Ray ZR already has the youth swaying to its tune with its trendy design, agility and Badsha’s catchy rap number. On the road, however, the lack of initial go and top-end performance soon make one snap out of the ‘swag’ spell. 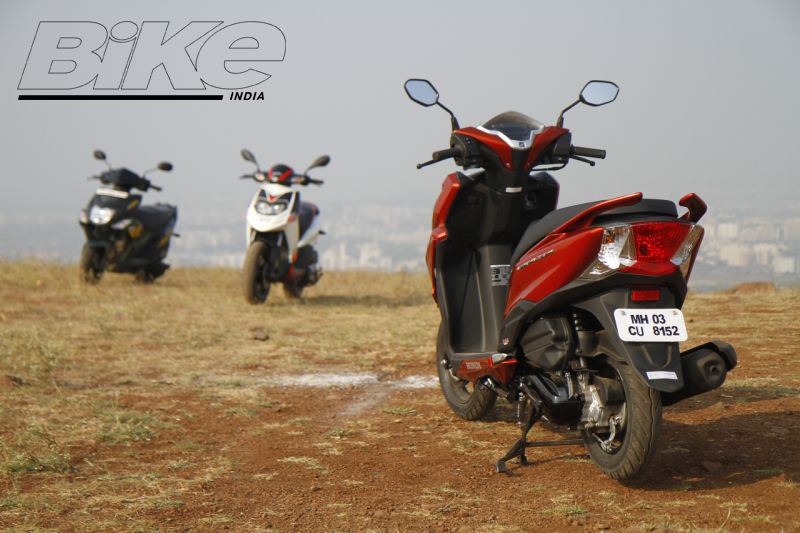 These shortcomings in competition have helped Honda carve out a comfortable space for the Grazia. In terms of performance it’s very close to the 150-cc Aprilia and yet is pretty comfortable and practical. To top it all, the Honda Grazia is priced at Rs 63,182 (ex-showroom, Pune) which make it Rs 6,000 cheaper than the Aprilia and Rs 5,000 than the Yamaha. All this, offered in an appealing design and Honda’s known reliability and widespread service network, makes it the most compelling proposition here.