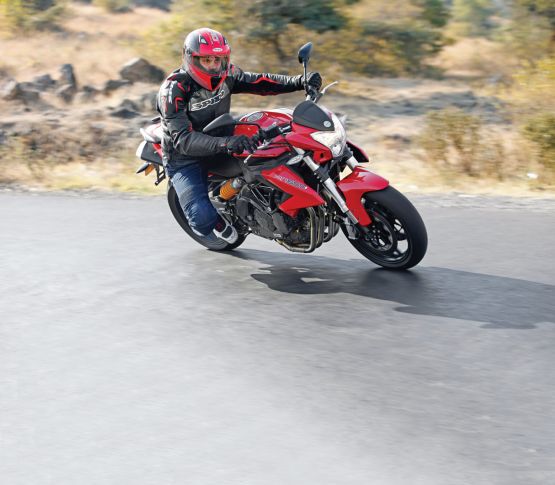 The TnT 600i is a sporty naked bike for everyday use. It has a simple looking front cowl with a halogen headlamp while the sculpted tank has a large top and angular shrouds. The compact information panel has an analogue tachometer while the odometer, speedometer, fuel-gauge, engine temperature and clock find space on a digital screen. This may sound similar to the one seen on the GT but both the bikes have distinct information panels and sets of switches. The seat is split in two parts and there is a step between them since the tail rises to accommodate the twin mufflers of the four-into-two under-seat exhaust sticking out of the its rear end. The mufflers are a styling element and have a triangular cross-section, with the LED tail-lamp placed between them while the exposed monoshock spring of the 600i comes in yellow.

The 600-cc in-line four engine of the 600i has different power and torque curves than its sibling. The power output is equal at 83 PS but it is developed even higher at 11,500 RPM while the torque has been marginally reduced to 52 Nm and is generated at 10,500 RPM, making it a very peaky motor for a street bike. The engine feels restricted at low revs like the GT and gets stronger from 7,000 RPM onwards. However, the 600i is no slouch and the six-speed gearbox keeps the bike on its toes. It has a 15-litre fuel-tank which should give it a range of about 225 km assuming an average fuel efficiency of 15 km/l. The 320-mm double front discs and the 260-mm single rear disc shed speed effectively but lack the initial bite and the bike gets the same grippy Pirelli tyres as the GT. 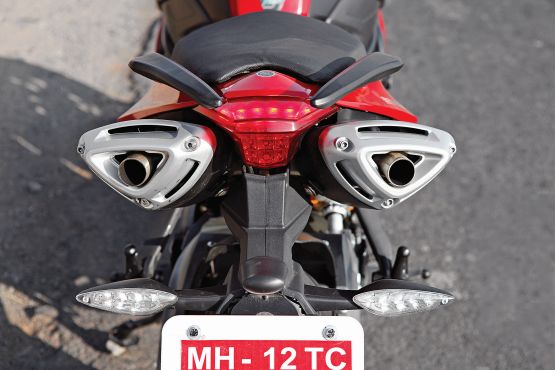