Bajaj recently launched their top-of-the-line motorcycle in the Platina range – the Platina 110 H Gear – priced at Rs 55,373 (ex-showroom, Delhi). The disc brake variant will go up against the TVS Victor and the Honda Livo. Read on to find out what’s new about this household name in the commuter motorcycle segment.

Bajaj have smartly stuck to the tried-and-tested formula of the Platina that has made it popular with the masses, but added some subtle changes. This motorcycle features contemporary additions like a DRL, 3D logo on the tank and a part-digital instrument cluster. Other notable changes in the visual department include an all-black treatment for the engine and a quilt-pattern seat. The instrument cluster comprises an analogue speedometer and a digital readout for all the other information like the fuel gauge, trip meter and odometer, battery indicator, and a clock as well. The highlight of the digital readout is the ‘Gear Shift Guide’ that tells you when to upshift or downshift; for maximum fuel-efficiency, of course. However, there are no markings on the speedometer nor is there an ‘Economy’ light to indicate the optimal speed for maximum fuel-efficiency.

The Platina 110 H Gear continues to feature the same relaxed, upright riding position that its predecessors offered. In this model, Bajaj have adopted a linkage for the gear lever, lowering it by about an inch or so. With the addition of a well-padded seat, Bajaj have ensured that the saddle is a rather comfortable place to be. However, a slightly wider rider’s seat will certainly work in the Platina’s favour. 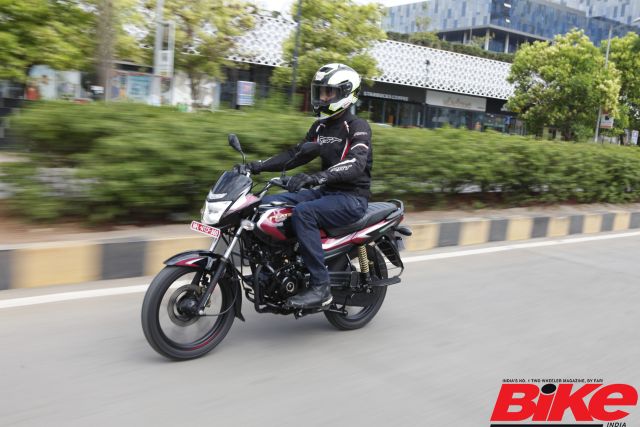 The rider remains immune to rogue vibrations at speeds between 70-80 km/h; with the first wave seeping in as you cross the upper limit. Even then, it is far from uncomfortable and easily more, if not as smooth as its rivals. Even while riding as pillion, there was nothing to complain about.

The Platina 110 H Gear is powered by the same mill that does duty in the Platina 110. The 115-cc, air-cooled, single-cylinder motor produces 8.6 PS at 7,000 rpm and the torque maxes out at 9.81 Nm at 5,000 rpm. The biggest change in this motorcycle is the gearbox. Unlike the four-speed boxes that did duty in the previous models, this Platina has a five-speed unit. Referred to as the ‘H’ gear by Bajaj, the additional cog does give the Platina an edge over its rivals when it comes to riding at highway speeds. 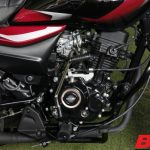 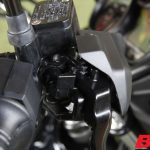 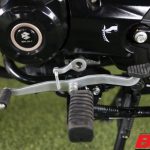 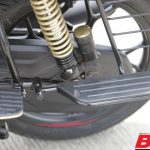 The motorcycle offers a choice of drum brakes at either end and an optional 240-mm disc at the front; both variants come equipped with CBS. We rode the disc-brake variant and it proved to be quite stable under braking with reasonable grip from the CEAT Zoom XL tyres.

While we are yet to conduct a detailed road test, I can confidently say that the Platina has a nice mix of torque and gearing. The motorcycle pulls from as low as 35 km/h in top gear and sprints to a top speed of 90 km/h (indicated).

As for handling, the Platina remains agile and quick on its feet; ready to change direction with the slightest of rider input. This character is complemented by a well-damped suspension set-up that does what is needed in daily riding situations. The Platina has a reputation for returning a lot of kilometres per litre of fuel. We did not get a chance to do a fuel-efficiency run but going by the ARAI-tested figures, this motorcycle tops its class by returning a brilliant 84 km/l.

As we mentioned earlier, the disc-brake variant is aggressively priced at Rs 55,373 (ex-showroom, Delhi); under-cutting both of its rivals. The TVS Victor costs Rs 56,682 while the Honda Livo will set you back by Rs 60,443; both prices are ex-showroom. Then, as a no-nonsense, reliable motorcycle to ferry you across town while being easy on the pocket, the Platina 110 H Gear makes a strong case for itself.