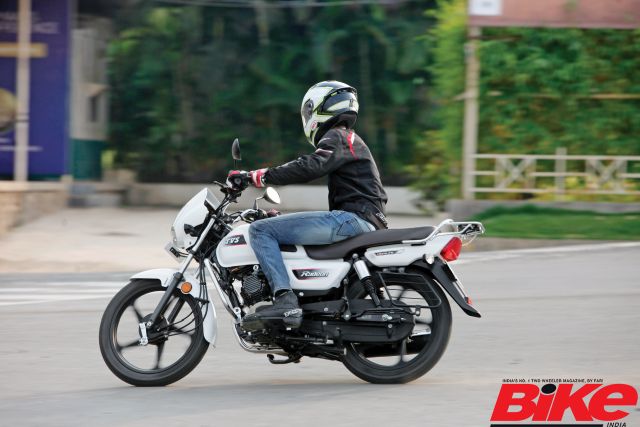 Once you turn on the ignition, the Radeon comes to life with the first kick or the first touch of the switch. After easing out into city traffic, one of the first things I noticed was the light-action clutch and well-spaced gear ratios. Even in slow-moving traffic, the Radeon is quite capable of moving along at a decent clip in second or third gear without a fuss. At 112 kg, it is easy to manoeuvre as well.

Power delivery from the efficient engine is smooth and linear and does not throw up any surprises. However, low- and mid-range torque has been provided at the cost of top-end pull which is evident in our acceleration run. The Radeon sprints from 0 to 60 km/h in 8.45 seconds but struggles to reach 80 km/h; achieving it in about 21 seconds. Triple-digit speeds were beyond its reach and the top speed we achieved was 86.68 km/h.

The suspension is well-damped for city use and, on the highway, the Radeon is pliant and planted. It performed better than I expected in the corners and enabled me to confidently carry good speed when needed. One area that needs immediate attention, though, is braking. The Radeon falls short of expectations under hard braking when using only the front brake and that is where the synchronized braking technology (SBT) comes in. Simply put, both front and rear brakes are engaged when you step on the rear brake pedal; the front brake in quick succession to the rear unit. During our attempt to slow it down from 80 km/h to standstill, the Radeon managed the feat in 3.5 seconds and 37 metres of tarmac; a decent figure for a motorcycle equipped with drum brakes. More importantly, it shed speed confidently with a stability that did not induce panic. At the end of the day, SBT is a purely mechanically-operated system and relies heavily on maintenance. For example, if you do not adjust the brakes in accordance with the wear and tear in the liners, the system’s effectiveness will be compromised. 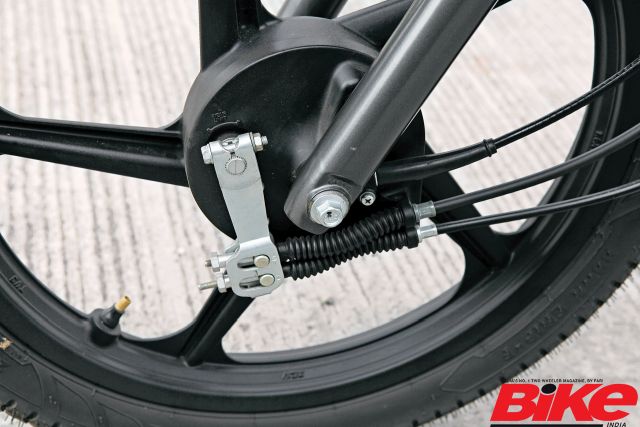 At the end of the penultimate round, the Radeon has proved its capability in parameters such as acceleration, handling, and ride quality. The only drawbacks appear to be its stopping power and the annoying side-stand alarm. It goes off if you switch on the ignition when the motorcycle is on its side-stand. Instead, it would have made more sense to have a kill-switch sort of mechanism that cut off the engine
if a gear were selected while the side-stand was engaged.

The Final Round: Verdict

Now we have reached the end of the interview and when reflecting on the Radeon’s performance in each round, it is clear that the motorcycle has almost always exceeded expectations. At this price, the quality of switchgear and cycle parts are good and feel like they will last for a long time.

The Radeon excels by having executed exactly what it was built for. It is a no-nonsense motorcycle that will ferry you from point A to point B comfortably; and quite frugally at that. So when it comes down to money, the asking price of Rs 48,990 (ex-showroom) plus maintenance charges after five free services is not a tall order. Especially when you consider that it is more affordable than the StaR City+. Furthermore, the Radeon returns 67.75 km per litre of fuel. Well, for an employee this capable, I think that is money well spent. 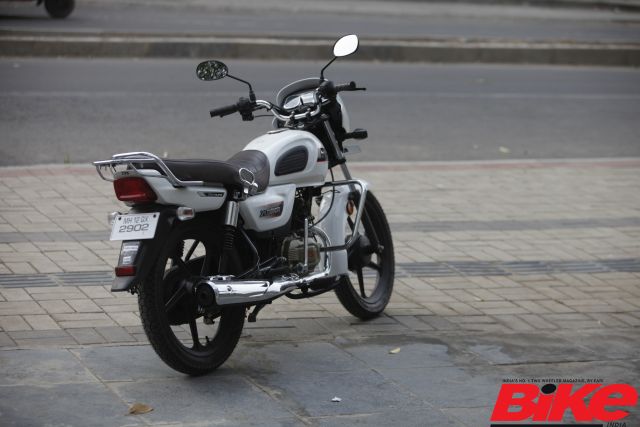 The Radeon may have landed itself a job but to be top employee, it will have to prove its worth against the Bajaj Discover 110, Hero Splendor iSmart 110, and the Honda Dream range. The Radeon has certainly undercut most of its rivals price-wise. As for popularity, only time will tell. Take a look at the first long-term report of the motorcycle, here.