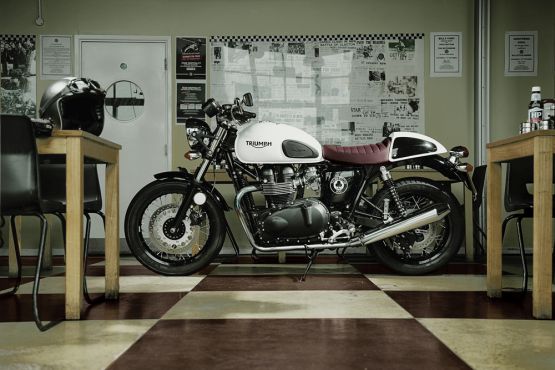 Triumph revealed a new Special Edition (SE) bike – The Triumph Thruxton Ace, which commemorates the bond between the British manufacturer and the famous London Café known for its motorcycle history. The bike was unveiled at the Ace Café in London, by Managing Director Mark Wilsmore as a prelude to the Brighton Burn Up event – one of the largest bikers reunion.

Well, apart from the aesthetic changes, the Ace is powered by the same 865cc, parallel-twin engine, which churns out 69 PS and 69 Nm of torque. The Thruxton Ace SE model goes on sale by December 2014 in UK dealerships and Triumph have planned to roll out 100 units of the Special Edition Triumph Thruxton Ace for UK triumph fanatics and even though Triumph has not revealed the price as of now, deposits are already being taken to book the Thruxton Ace Special Edition.

Adding to its exclusivity, the press release stated “With low slung handlebars, retro spoke wheels and a central stripe running along the tank to the beautifully sculpted custom seat, the Triumph Thruxton Ace looks as if it would be equally at home on a classic grid as outside the local café, after a spirited morning ride”.