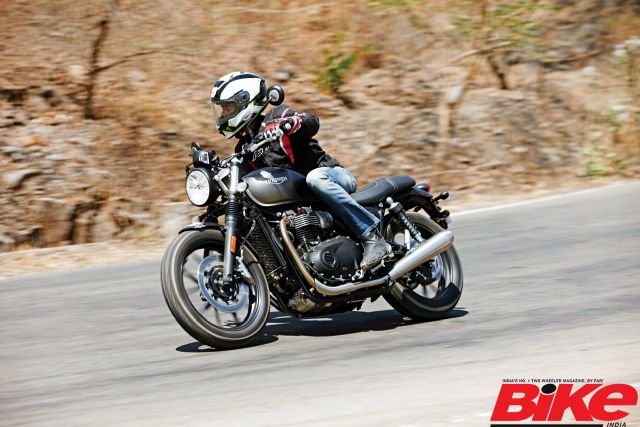 After putting the new Street Twin through its paces in Portugal a while ago, we find out if the motorcycle is as capable on home turf

If your usual pizzeria were advertising a bigger and juicier version of your favourite pizza, that would definitely make your day. As you dream about sinking your teeth into the slice, you are already imagining it to be better in many ways than your previous experience. In the world of motorcycles, that is probably how enthusiasts felt when Triumph announced that a new Street Twin was on the way.

The Street Twin has always been a bestseller for Triumph in various markets and refreshing it was like treading on thin ice for the Hinckley-based marque. They had to carry forward the appeal of the motorcycle with upgrades that would meet their customers’ expectations. Have they managed to pull it off? Read on to find out. Triumph are well-known for having cracked the modern-classic formula and all their motorcycles in that category are testimony to it. The Street Twin is no exception. Those who have seen the outgoing model will notice that not much has changed with the silhouette of the motorcycle. From head to tail, it retains the same lines and curves as the previous model. The simple round headlamp sits above an updated gaiter-clad fork and is crowned by the instrument cluster. The next thing to catch your eye is the handsome filler cap that sits slightly offset to the right-hand side of the fuel-tank. The 12-litre teardrop-shaped tank tapers down to meet the saddle and the seat then culminates in a simple, tidy tail-end.

For me, the most striking feature of the motorcycle are its exhaust pipes. They extend from the cylinders on either side of the motorcycle, forming a heart shape before sweeping back into simple but elegant twin pipes. The exhaust note is subtle at low revs and an aural delight as you open the throttle further. Other changes in the visual department also include new colours, alloy wheels, and a redesigned Street Twin badge. 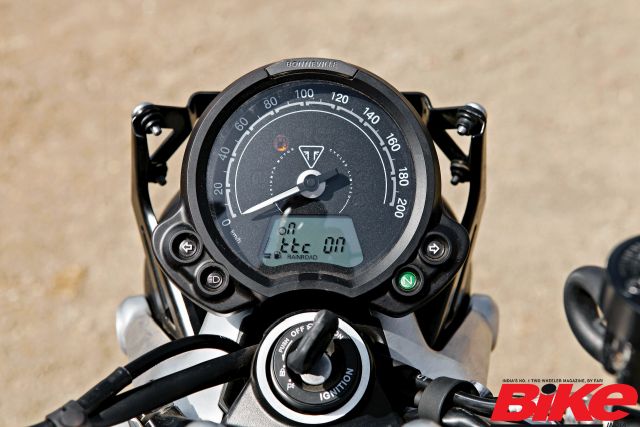 The single-pod meter has been refreshed with a new look. It is dominated by an analogue speedometer while an inset digital window gives information such as riding mode, traction control status, time, tachometer, distance to empty (quite useful), and so on. The left side of the handlebar has a button for choosing between rain or road modes and another to toggle between the information displayed on the digital readout. The switches are well laid-out but the quality could have been better. 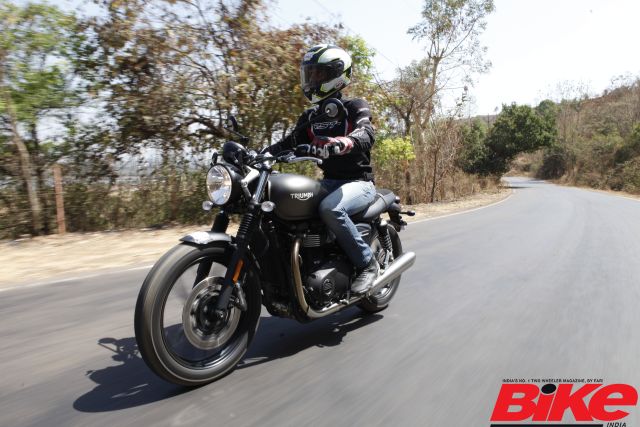 The saddle height is only 760 millimetres and it’s a comfortable place to be in thanks to the new padding. The handlebar is at the right height and slightly towards the rider and works well with the position of the foot-rests to offer a relaxed riding position: a fairly upright posture that is comfortable for stop-and-go traffic and ideal for long rides as well.

The new Street Twin is far from just another cosmetic touch-up, though. Powering the motorcycle is the same 900-cc, liquid-cooled, SOHC, parallel-twin engine with a crucial update. The mill now has a higher compression ratio and boasts of an 18 per cent increase in power — 65 PS at 7,500 rpm — thanks to lighter internals. Peak torque remains unchanged at 80 Nm but it comes in a little later at 3,800 rpm (fret not, though, for a major chunk of torque is available earlier in the rev-range). That translates into a meaty torque curve that gives you ample grunt in the low- and mid-range and also supports spirited riding at the top end. 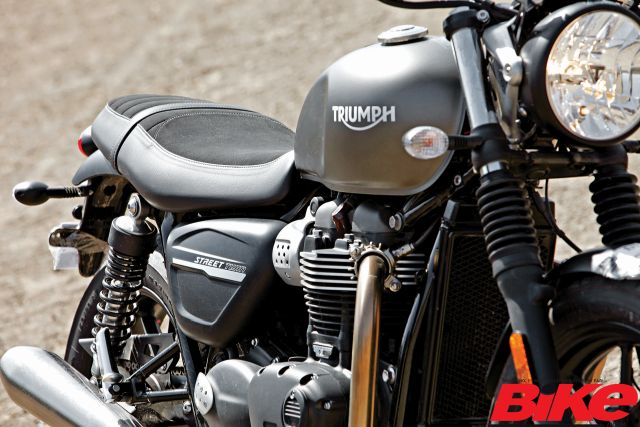 It was time to hit the road on a route that comprised highways, twisties, and some rush-hour traffic. On the highway, the Street Twin was flawless. The massive engine and its meaty torque curve allowed me to pull each gear until about 7,000 rpm; 0-100 km/h was dismissed with ease using just the first couple of gears and I can confidently say that the motorcycle will hit more than 170 km/h easily — if you manage to stay in the seat against the wind blast, of course. The new KYB fork is on the money and, as a whole, the suspension set-up was impressive and provided a plush ride over the bumpy sections. 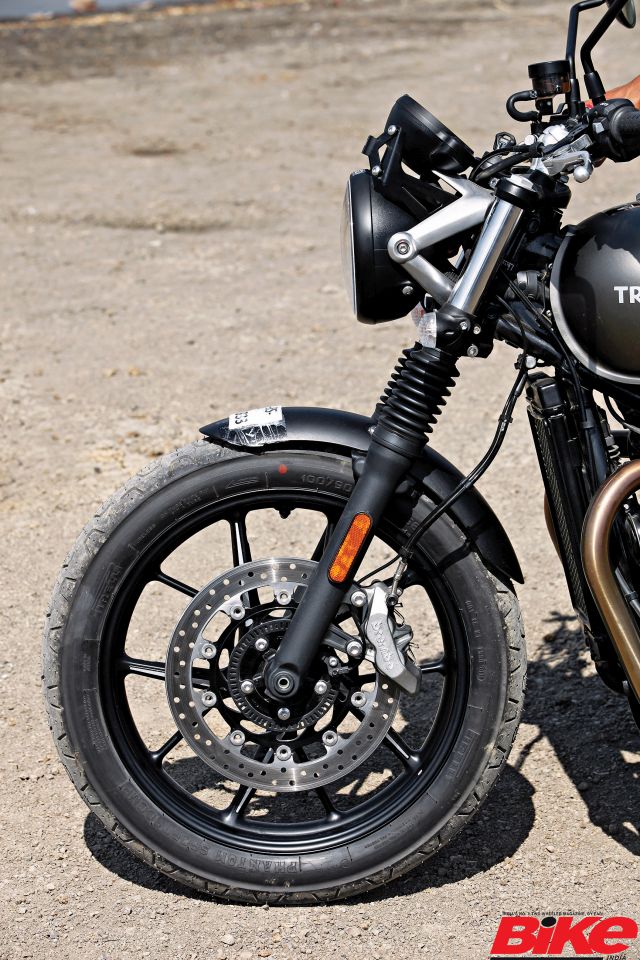 On the twisties, it was a slightly different story. On that hot afternoon, the Pirelli Phantom Sportscomp rubber provided good grip and the motorcycle was easy to flick into corners where it held the line I wanted it to without fuss. However, the tail-end was noticeably unstable when I went over small bumps in the middle of some corners. While the front fork is not adjustable at all, the rear only gets pre-load adjustment. At the time, I was riding the motorcycle on the softest setting. Perhaps, dialling up the pre-load a notch or two (as per weight) may help in ironing out this niggle. Braking into a corner was easy thanks to the great feedback from the four-pot Brembo caliper at the front. Exiting was just as fluid because the ride-by-wire throttle and traction control would smooth out any jerky inputs with the throttle; delivering power to the rear wheel in a smooth and linear fashion.

Although the Street Twin is a capable performer on the highways and twisties, what I like best about the motorcycle is its sheer usability in traffic. Good weight distribution and manoeuvrability allowed me to pick my way through traffic easily without being conscious of the motorcycle’s 198-kg (dry) weight. The gearing and torque band let me pull away cleanly in top gear from close to 40 km/h as low as 1,400 rpm. Furthermore, first gear was adequate for most slow-speed situations. Barring heat on your legs after a few hours in traffic, the Street Twin makes a strong case for itself as a motorcycle that you can use every day. 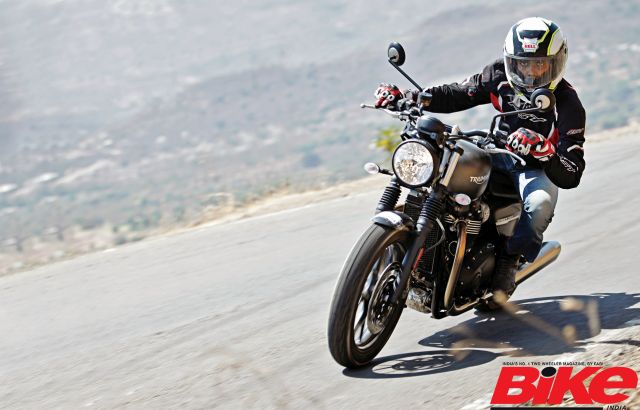 Want one? Get ready to shell out at least Rs 7.45 lakh (ex-showroom); which, although lesser than the previous model, is still not exactly accessible. I said “at least” because Triumph are offering a ton of accessories, giving you the chance to make your Street Twin unique.

The verdict? Well, if I were a well-off motorcycle enthusiast who needs something premium to use in the city, then I would look no further than the Triumph Street Twin.