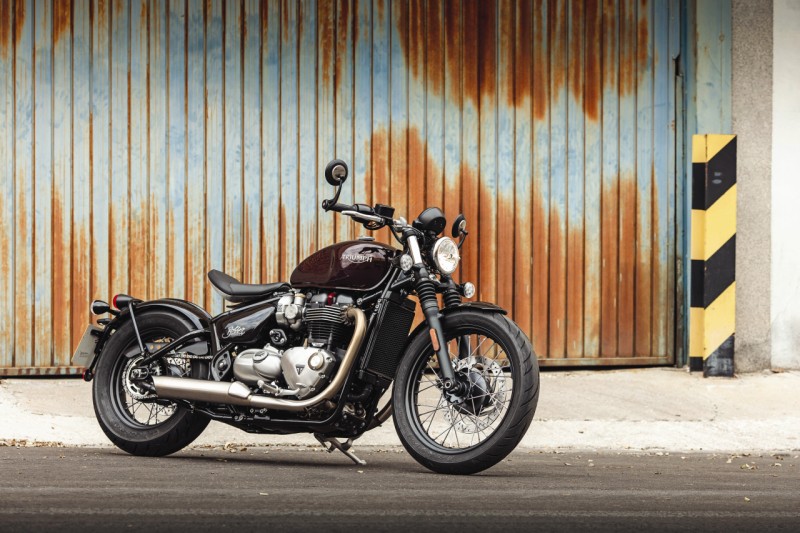 The motorcycling world seems to have caught Bobber fever, judging by the flurry of advance orders that look like resulting in Triumph’s cut-down Bonneville outselling last year’s Thruxtons to challenge the Daytona 675 and Street Triple as the firm’s most successful début model ever. With its hardtail look and air of vintage custom cool, the Bobber seems to have caught the imagination of old and young riders alike. But is it any good?

Any bike would have done well to generate much enthusiasm during the first half hour of the launch ride near Madrid. I’d been gritting my teeth on a foggy motorway, my goggles misting and the near-freezing wind whipping around my open-face helmet and jeans. Then we turned off the motorway, climbed briefly and emerged from a cloud into a dreamscape of picturesque valleys and twisty, sun-kissed roads where the Bobber’s single saddle was a great place to be in.

And in truth, Triumph’s factory custom (that familiar contradiction in terms) had been doing well even with the elements against it. Its 1,200-cc parallel-twin engine had been flexible, smooth and responsive, its chassis stable and controllable, its riding position and seat respectably comfortable, its accessory heated grips invaluable. So no surprise that when the weather and roads took a major turn for the better, the Bobber was brilliant fun.

It certainly looks the part, this latest and boldest member of the fast-growing Bonneville family. Its name comes from the stripped-down, hotted-up bobbers that American riders built for speed and lightness in the 1940s and ’50s. Some of those bikes were Triumphs, based on models including the Meriden factory’s 500-cc Speed Twin, or 650 Thunderbirds like the one that Marlon Brando rode in The Wild One.

The modern model on which the Bobber is based is the Bonneville T120, whose 1,200-cc, liquid-cooled engine it shares. The eight-valve unit is mechanically identical but a new twin-airbox intake system and double-skinned exhaust boost torque by up to 10 per cent between 3,500 and 5,500 revolutions per minute, while cutting the top-end output by a few horsepower, to 77 PS at 6,100 rpm.

Where this Bobber differs noticeably from the bikes that inspired it is by having a new chassis; not simply a trimmed and lightened one. The frame is still made from tubular steel but, instead of holding twin shocks like the T120, has a near-horizontal monoshock that is sufficiently well tucked away below the single saddle to give that hardtail image. At the other end, the wide, near-flat handlebar sits above a pair of gaitered, non-adjustable forks. 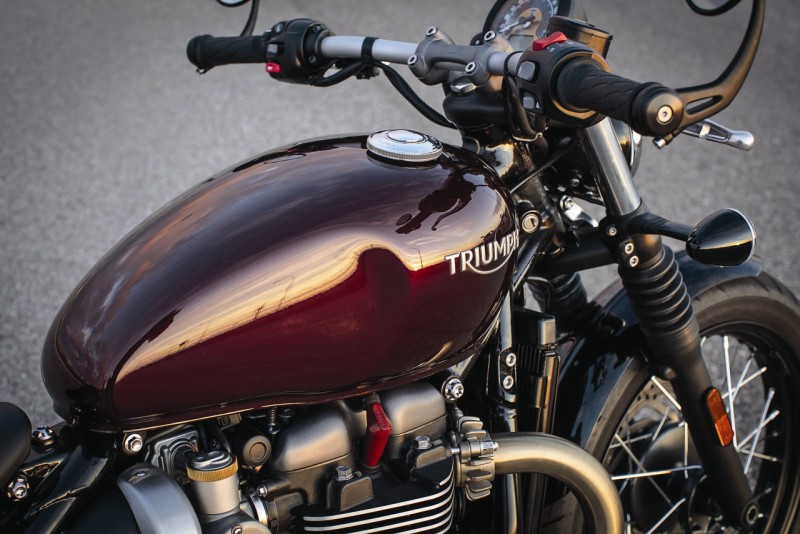 That aluminium single seat does most to give the Bobber its unique look, backed up by some typically neat details. The instrument panel is a large, round analogue speedo with digital insert, and can be pivoted to fine-tune the view. There’s a battery box with stainless steel strap below the shapely fuel-tank which holds just 9.1 litres. The rear brake’s master cylinder sits below a neat screw-in cap in the brushed aluminium sprocket cover.

Triumph have done a great job with the finish — from the classy paint (in four colour options) to the touches of bronze in tank badges, injectors, and engine covers. Even on a dull Madrid morning the Bobber looked inviting as I threw a leg over its low seat, flicked up the slightly awkward side-stand from below the left foot-rest, and turned on the ignition with the key down by my right knee. The bike fired up with a pleasant thump from its slash-cut silencers, and pulled away effortlessly when I let out the light-action clutch. 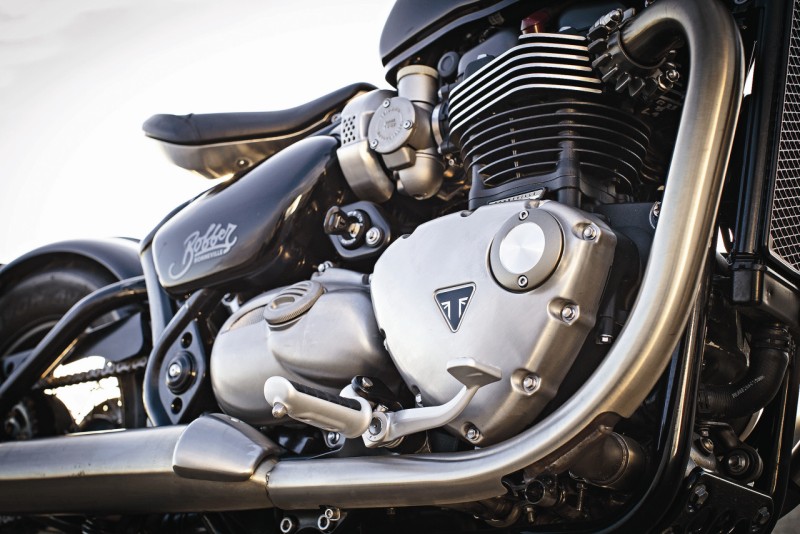 Triumph’s SOHC engine is pleasantly torquey in T120 spec and felt deliciously strong in the Bobber, which pulled from as little as 2,000 rpm in the lower gears. The bike rumbled forward obediently whenever the throttle was wound open, changing through its six-speed gearbox and staying smooth even towards its rev-limiter at about 7,000 rpm, though the sweet spot was around the 4,000-rpm zone where the maximum torque figure of 106 Nm is delivered.

There’s a softer Rain mode but throttle response is so good that you’d rarely if ever need it, especially as the Bobber follows the T120 by having traction control built in. With that gentle nature and the upright riding position the bike was pleasant to potter around on, and there’s enough torque for some straight-line entertainment as well. On a couple of short straights the Triumph accelerated pretty quickly to an indicated 175 km/h before I had to slow, though there wasn’t much left at the point.