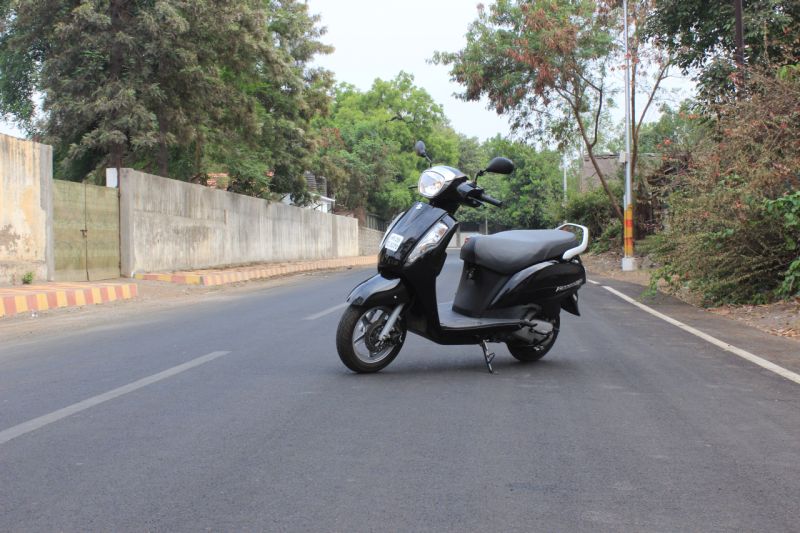 Intro: Suzuki have given their flagship scooter, the Access a much needed facelift – the first since its launch in 2007! Has this old dog learned some new tricks? We swing a leg over the Access 125 to find out

The Access was the pioneer in the 125-cc scooter segment when it first came out, and had an instant impact on the Indian scooter market. Over time it has become one of Suzuki’s top sellers with over 2 million units sold. And now, over eight years after it was first launched here, it comes to us with a few choice upgrades.

No wonder Suzuki went in for a freshened up version of the Access either, the bike had started to look a little dated. On the new Access 125, the headlamp has been revamped and sees a pretty line of chrome surrounding it. There are a few chrome accents around the front indicators and the tail lamp unit as well. Take it in from the side, and you’ll notice that the lines running along the body panel are pretty sharp and in keeping with the latest trends in scooter styling. Your eye will definitely focus on the chrome covered exhaust which seems a little on the extravagant side for my taste. The sweet 12”front and rear alloys as opposed to the 10”steel ones will also draw your eye. Overall though, it isn’t the hottest looking scoot on the block, but neither is it distasteful to look at – fair to middling would be the best way to describe it. 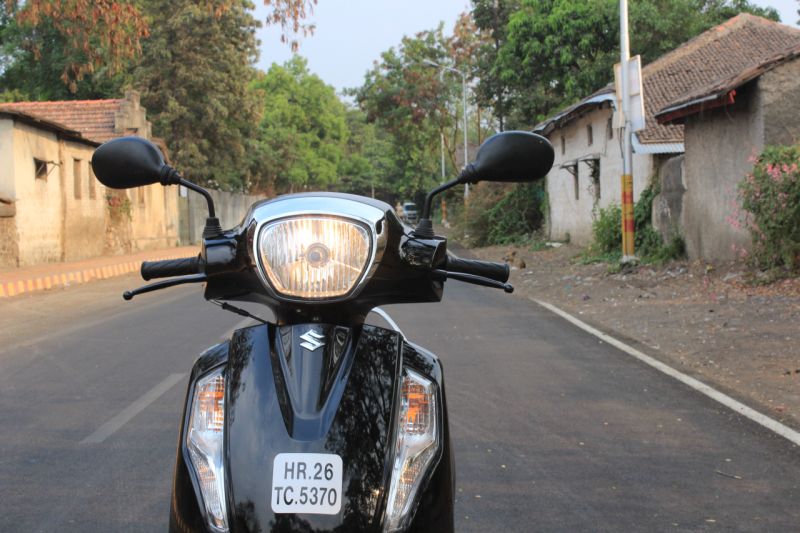 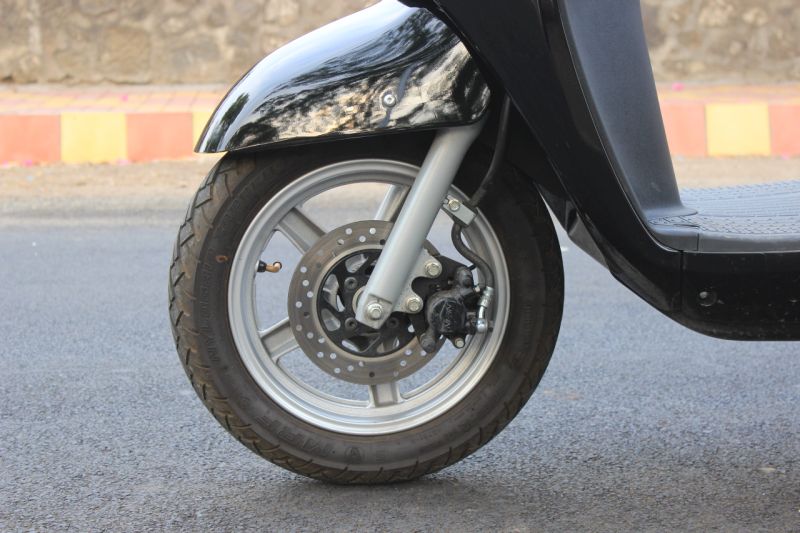 Feature-wise, the Access 125 has definitely stepped up its game. There are now two hooks (one at the fore of the seat and one near the keyhole) for extra hang-ability, a very handy pocket to slip your grocery list, phone or something that everyone will need in the summer heat – a water bottle. There is even a optional DC charging point available, which has been handily positioned right above the aforementioned pocket which means you phone need not be relegated to the luggage space below the seat like it would on many of the Access’ competitors. Speaking of luggage space, the Access provides an above adequate amount of space to stow things in.

The engine on the Access 125 has the same configuration as before – a single-cylinder 124-cc plant. However it too has been reworked and is now infused with Suzuki’s SEP tech. It still produces 8.7 PS at 7,000 RPM but now produces more torque all 0.4 Nm more of them with a figure of 10.2 Nm at 5,000 RPM. Suzuki claim that SEP has made the engine both more powerful and more efficient, with a 64 km/l figure touted. We will test it soon and report definitively on both counts. The fuel tank capacity though has dropped on the Access 125 from 6 litres on its predecessor to 5.6 litres. Rounding off the changes is the addition of a front disc brake. Also as an option. The switches are of a decent quality on the new Access, and the analogue speedo is now paired with a digital fuel gauge and odometer. 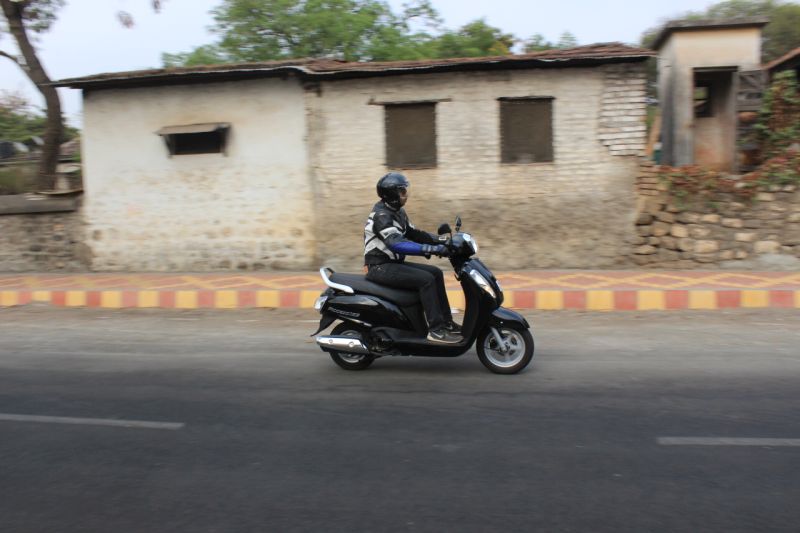 The riding position on the Access 125 is comfortable and the legroom is pretty decent too. Twist the throttle and you feel the scooter responding with enthusiasm, and the engine refinement levels feel pretty decent as well. Handling wise the Access dovetails with ease around traffic so no complaints there, helped along by the telescopic suspension up front and the damped coil-spring at the back. Speaking of suspension, the ride quality too is quite supple, soaking up the bumps from unsound road surfaces pretty well. The addition of the front disc means braking is accomplished quickly and without drama too. Again, keep an eye out for our road test for definitive, statistic-backed judgement on the scooters performance aspects.

The Suzuki Access 125 costs just over the Rs 60,000 mark (OTR, Pune) and at that price point is a worthy challenger for the 125-cc scooter crown. 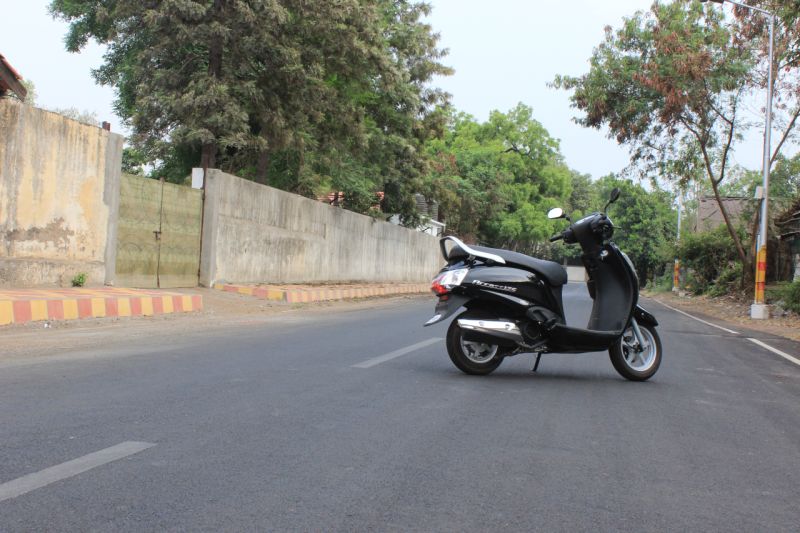