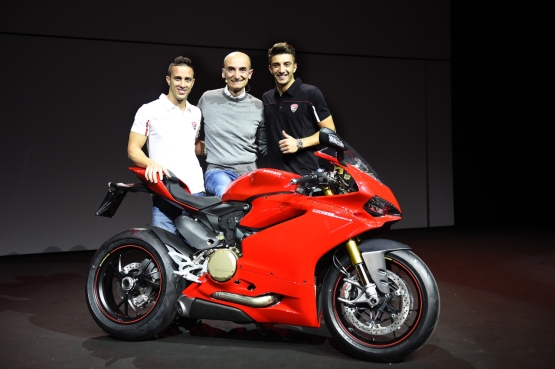 Ducati are once again set to paint the motorcycling world red; this time with the 1299 Panigale, the 1200 Multistrada and the Diavel Titanium.

The Bologna-based company has upped the flagship model to 1,285cc on the standard as well as the S version, which bumps up peak power to 205 PS at 10,500 RPM and peak torque to 144.6 Nm at 8,750 RPM. This record breaking power-to-weight ratio of over 1,230 PS/tonne will be accompanied by the state-of-the-art electronics package which includes the Bosch cornering ABS in tandem with the Inertial Measurement Unit (IMU). The S version will receive a special treatment of the Öhlins Smart EC along with stepper motors on the TTX shock and NIX-30 fork that modifies suspension setup based on input from the motorcycle’s various ECUs.

Other rider aids such as Ducati Wheelie Control (DWC), Ducati Traction Control (DTC), Engine Brake Control (EBC) the industry-first Ducati Quick Shift (DQS) are also optimized for the 1299. The standard version will retain the 50mm Marzocchi forks and Sachs at the rear. Changes to the chassis include a revised rake angle of 24º dropping the trail to 96mm from 100mm. The swing arm pivot has been lowered by 4mm to enhance traction.

The other offering from Ducati is the Multistrada 1200 featuring the Ducati Testastretta DVT (Desmodromic Variable Timing) which allows independent control of the intake and exhaust camshafts to optimize low end torque and top end punch and ensure performance across the rev range. The Multistrada will also employ intelligent headlamps which illuminate the inside of a corner thus ensuring better visibility.

A fresh new addition to the Diavel family is the Diavel Titanium edition. The limited-edition Titanium version will use lavish amounts of carbon-fibre and titanium to provide a sense of exclusivity to the special 500 customers.

The motorcycles are expected to launch globally by March next year.

You can watch the video right here: