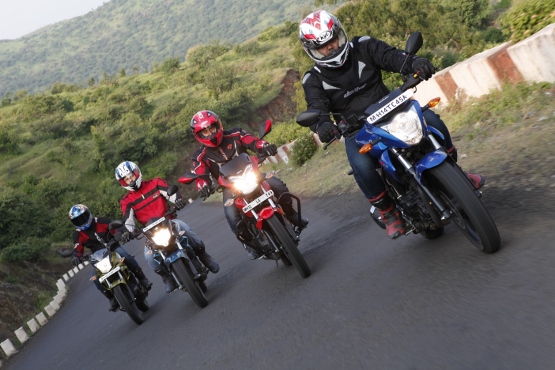 The real test of any motorcycle, however, happens only when you start rolling. So we flicked on the ignition and thumbed the starter buttons. Even at idle, the Suzuki and Honda engines come across as more refined than either the Yamaha or the Hero powerplants. Get going and the difference in refinement becomes even more evident. On both the Suzuki and the Honda the vibrations (whatever few exist) are muted and non-intrusive with hardly any noise filtering in through the helmet. The Yamaha by comparison feels gruff and throaty with some vibrations being felt through the seat of the pants and the foot-rests when you give the bike the stick. The Hero’s engine, though essentially a variation of the old CBZ engine, has now begun to show its age. It’s not a bad engine by a long shot and has healthy doses of power and torque, but it does come across as the least refined. By the time the tachometer has hit the 6,500-RPM mark, the unit feels strained and there were times when we felt that we were yet to shift up to the top gear.

Speaking of gears, the Yamaha has the best shifting five-speed gearbox in the business with slick shifts as gears slot in with a positive click. The FZ is followed closely by the Gixxer and then the CB Trigger (though we would welcome a transition from the heel-and-toe shifter to a toe-only shifter on the Honda). In the battle of the gearboxes too, the Xtreme loses out with a ‘box that feels just about par for the course.