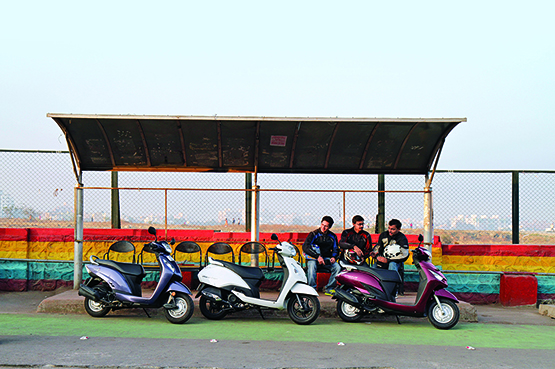 The latest advertisement for the Yamaha Cygnus Alpha is more than just an advert selling a scooter. It’s actually a representation of how people – both those who sell and those who buy – view the ubiquitous two-wheeler we all know as the scooter. With its focus on storage space, ease of riding and so on, the advert clearly highlights the scooter’s, any scooter’s, inherent strength: practicality. Indeed there are many things about a scooter that we now take for granted – a lockable cabinet under the handlebar, a similarly lockable under-seat stowage, a foot-board where one can plonk a backpack or a laptop bag (which would have been a briefcase a few years ago) between one’s legs and so on. Good fuel efficiency too is a must. To sum up, a good scooter has to be cheap to buy and own, should offer a lot of convenience and needs to be easy to ride, park and store.

Each of the scooters that we have here today – the Yamaha Cygnus Alpha, the Honda Activa-i and the TVS Jupiter – would tick most of the above boxes. Picking the best among this lot, therefore, is not an easy task. The differences aren’t a mile wide and one will eventually get down to the nitty-gritty of each to decide which of these three you should put your money on. 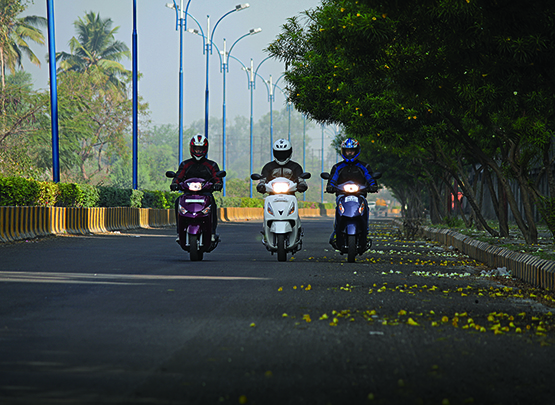 To start with, let’s focus on the looks of each. Place the three in a row and seven or eight times out of 10 you will find your eyes drawn towards the Yamaha. Make no mistake. It’s not as if the other two are ugly; not by a long shot, but in terms of design and styling the Cygnus Alpha is certainly ahead of the pack. It looks stylish and contemporary. The test vehicle we were given came in a nice dark shiny shade of purple, called Magical Magenta. Noteworthy is the tail-lamp cluster of the Cygnus Alpha. The brake-lamp is set below the indicators, which flank the rear/brake-lamp, giving it the look of a face when seen rear on. The stylish design is carried through to the instrumentation as well with nice sporty looking needles.

The TVS Jupiter looks quite decent even though it lacks the Yamaha’s panache. Its bulbous nose and conventional lines render this scooter quite pleasing. While the colour of the test vehicle, Pristine White, was not too exciting, it will none the less be popular on account of being easier to maintain over a period of time. Visually, the rear end of the Jupiter is somewhat marred by the presence of the fuel filler cap just above the tail-lamp assembly. The styling of the clocks, though, closely rivals the Yamaha’s. Housed in a console that boasts of carbon-fibre finish and clearly demarcated tell-tale lamps, the TVS indeed has a very smart instrument console.

The Activa-i is also a good-looking scooter in its own right, but fails to make the same impression as the Yamaha. This despite boasting of lines that are less conventional than the other two. A large part of this failing to make an impression has to do with its size. It’s the narrowest and lightest of the three here, which makes it look somewhat lost when placed next to the other two. The Honda’s tail-lamps are good-looking, but nothing to write home about. What disappoints is the instrumentation. Although Honda have tried to make it stylish with some swirls on the dash between the dials and added a splash of colour, the clocks themselves are fairly plain and unexciting. 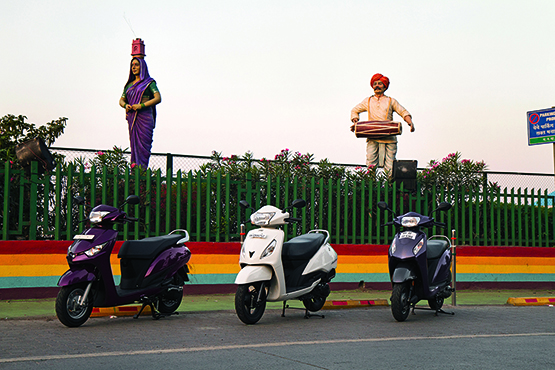