Among the three the Honda Activa-i is the easiest to ride. It boasts of great acceleration and rideability and is, therefore, the peppiest. One can put this down to its light weight for sure, but also its quick throttle response and linear power delivery. Twist the right wrist, and there’s power available immediately. Keep twisting the throttle, and you’re rewarded with a steady stream of acceleration. At the same time, the Honda manages to return the best fuel economy of the lot – almost 20 km/l more than the other two! It is also the nimblest of the lot and is a joy to ride when filtering through traffic. Flick it left, pick it up and flick it right again as you weave through a jam. Quick changes in direction is a cakewalk for the Honda. The same light weight that accounts for its peppiness also means that the bike becomes skittish over broken roads, bumps and ruts. It is mostly an irritant for the better part of the time that one rides about town. Stopping the Activa-i is also easily done with Honda’s CBS doing a fine job of shedding speed without drama. 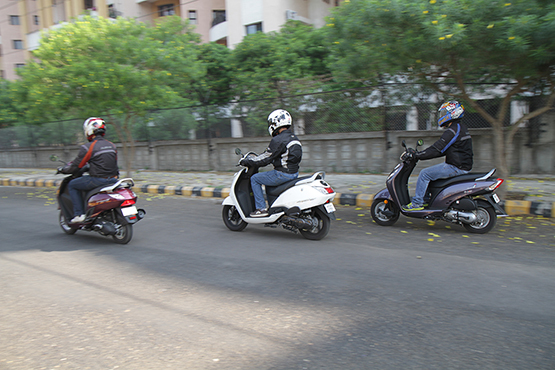 The other two are nowhere near the Activa-i when it comes to ease of riding and sheer pleasure, but between the remaining two the TVS is more competent. It has sufficient grunt for in-city overtaking where speeds are usually below 50 km/h and its power delivery is pretty linear too. At 43.5 km/l overall, fuel economy on the Jupiter is par for the course. Handling on the Jupiter is pretty well-sorted as well, even though it isn’t as flickable as the Honda. Where the TVS really outshines the lot is in its ride quality. Of the three the Jupiter has the best ride, with its suspension soaking up bumps and ruts quite well. Rumblers are barely registered as one rides through. The brakes on the Jupiter are good enough for most purposes, but they lack feel when compared to the other two here. 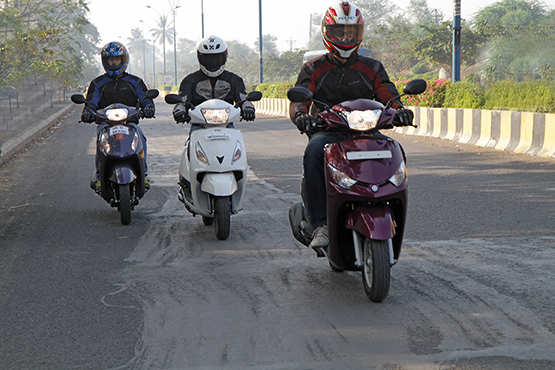 On each of these counts except one, the Yamaha acquits itself adequately. It does boast of decent dynamic abilities and responds to quick changes in direction and there is adequate power on twist for most people’s daily needs. However, it just doesn’t have the peppiness of the Honda. It feels as if it could do with a bit more grunt, especially when overtaking at city speeds, but it does have better acceleration than the TVS towards the top end of the spectrum. The Yamaha is the thirstiest of the lot, returning a fuel efficiency of 42.5 km/l. The suspension too is set stiffer than the TVS and feels less comfortable. However, on the ride quality front the Yamaha sits between the other two. Braking on the Cygnus Alpha too is stable with little drama as one comes to a stop.

On the whole then, it’s a bit of a toss-up. If you want a scooter that will appeal to your aesthetic sense and if you are on the lookout for a decent scooter that has a high style quotient, then reach for the keys of the Yamaha Cygnus Alpha. If it’s a stable, calm and comfortable scooter with nifty features, then the TVS Jupiter is the one you need to put your money on. But for the buyer who’s looking for the best buy of the lot, it has to be the Honda Activa-i. It is superbly fuel-efficient, the quickest of the lot and the most fun to ride. Not to mention it has the best stopping power of the three. It’s easy to ride, easy to park and store and offers enough convenience features to satisfy most people’s daily urban requirements. Overall, therefore, the Activa-i fits the bill when it comes to being the best 110-cc scooter money can buy and is the winner of our comparison.