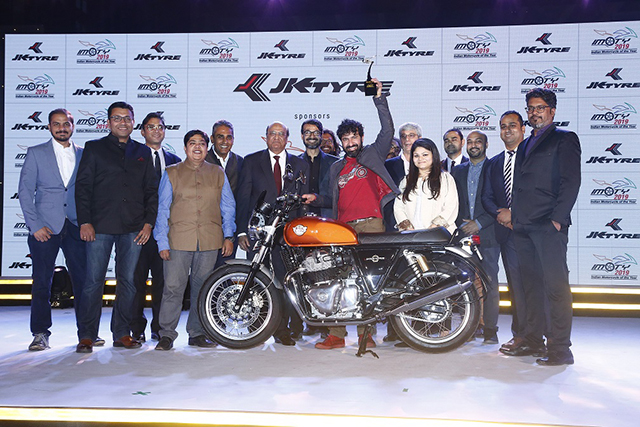 The new twin-cylinder wonder from Royal Enfield receives the highest accolade in the Indian motorcycle industry.

This year, the Indian Motorcycle of the Year (IMOTY) saw a lot of contenders like the BMW G 310 R and GS, Hero Xtreme 200, TVS Apache RR 310, Royal Enfield Interceptor 650, Honda CBR650F, Suzuki V-Strom 650, Triumph Tiger 800 and more in the running. However, it was Royal Enfield’s latest Interceptor 650 that won the most prestigious motorcycle award beating all those other contenders. This new RE motorcycle took home the big prize thanks to its superb ride-quality, great handling, and most importantly an aggressive pricing that makes it an excellent value for money proposition. The Interceptor 650 is the second Royal Enfield motorcycle, after the Continental GT 535, to have won the IMOTY.

An ecstatic Siddhartha Lal, CEO, Royal Enfield, stated, “We are delighted to win the coveted Indian Motorcycle of the Year award for the Royal Enfield Interceptor INT 650. The 650 Twins mark the beginning of a new global chapter for Royal Enfield. This acknowledgement from IMOTY’s expert jury is testament that our idea of classic, fun, evocative motorcycles with completely modern underpinnings resonate with the discerning motorcycle riders”

Dr Raghupati Singhania, Chairman & MD, JK Tyre & Industries Limited, said, “The ICOTY and IMOTY awards are like the Oscars of the Indian auto industry, rewarding the most exciting vehicles that have been introduced on Indian roads this year. The awards have undergone a rich journey over the years and today they represent the highest level of credibility, judgment and recognition. The Indian auto industry is at par with the global auto industry and this has further intensified the competition and made the evaluation process tougher at ICOTY and IMOTY. I would like to thank the jury members for the task, though challenging, accomplished so well.

“At JK Tyre, we believe that innovation and superior technology are the foundation for the future. This is the key reasons we have collaborated with the ICOTY and IMOTY awards since inception. I congratulate Maruti Suzuki Swift, Volvo XC40 and Royal Enfield Interceptor 650, for winning among the bests of the industry, who are equally remarkable, and for providing best-in-class value proposition to the customers.”

We have ridden the bike in India and this is what we have to say: Royal Enfield Twins: Riding the 2019 IMOTY Winner in India.