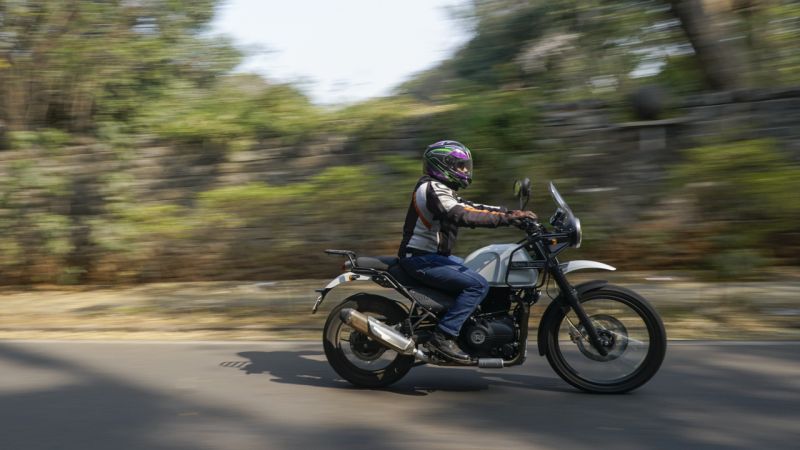 Putting the fuel-injected Himalayan through its paces, on the road and off.

Royal Enfield opened up the small adventure bike market with the launch of the Himalayan in 2016, giving us a motorcycle that wasn’t shy to leave the tarmac and take on the trails. While the elite could buy large, multi-cylinder adventure bikes for their travels, these were out of the reach of most enthusiasts, and Royal Enfield went ahead and filled this gap in the market. With its simple utilitarian design, lack of plastic, rugged build and wire-spoke wheels, the Himalayan was India’s only genuine small-capacity off-roader, and has proven capable of tackling just about any terrain. 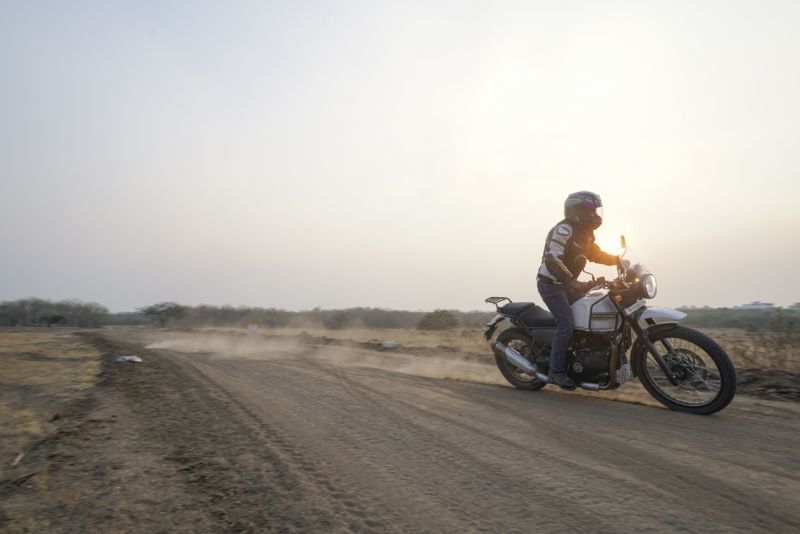 Now, for 2018, RE have endowed the Himalayan with fuel injection, ensuring that it passes today’s stringent Euro 4 norms, while getting a little more refined in the process. The design remains unchanged from the older model, and only on closer inspection will you realise that the handlebar, bar-end weights and fuel tank lid have been blacked out, while the meters, although identical to the previous model, are missing the hazard light switch. Other than this the bike is visually identical to the previous model, and only when you peer under the tank will you notice that the carburettor has been replaced by a throttle body and the assorted wiring and electrical connectors for the fuel injection system. 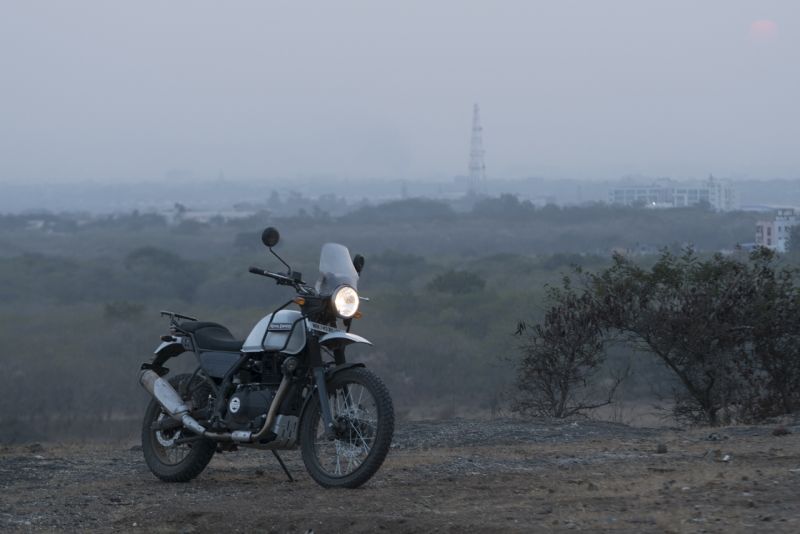 The bike ticked to life with a gentle dab of the starter button, and it was immediately apparent that the engine felt a lot smoother than before. This is the same LS410, oil-cooled 411-cc single that was introduced with the previous Himalayan, but the shift to fuel injection seems to have done wonders for its refinement. The lumpiness that we felt at crawling speeds has vanished, and the unit seems to rev up more freely than before with ample torque available from low revs, well into the midrange.
My ride kicked off in the middle of Pune city, and I was instantly reminded of the fact that tall, upright motorcycles provide a fantastic view over most cars. This, combined with the Himalayan’s easy manoeuvrability and ample steering lock, saw me filtering through traffic with ease, head and shoulders above most other vehicles on the road. RE seem to have got the fuelling just right on their first attempt, and this is apparent from the seamless throttle response all through the rev range. The 41-mm fork and linkage-mounted monoshock have 200 and 180 millimetres of travel respectively, and smoothly dispatched potholes and massive speedbreakers without me even needing to slow down. I found the handlebar placement to be just right, and the reach to the bars was comfortable when seated, or when standing up on the pegs as we glided over rough patches. On the open road the Himalayan can cruise easily at 90-100 km/h, before the vibes coming through the pegs, bars and seat become intrusive. The bike also handles better than expected on the road, and although feel is a little vague due to the tall front wheel and softly-sprung setup, the Himalayan holds its line through a curve impressively well. 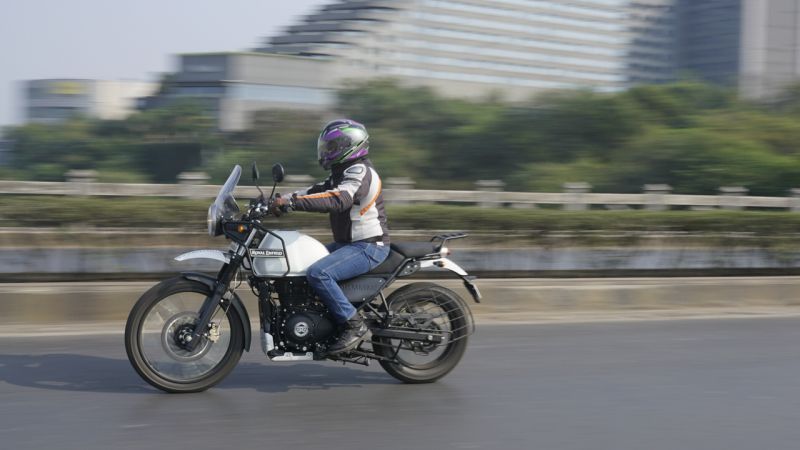 We were soon at the outskirts of the city and turned onto a mud road that led us to acres of open space, criss-crossed by several dusty trails and interspersed with rocky bits, small hillocks and several jumps. Here the Himalayan came into its own, and I was soon ripping up and down the trails kicking up a huge cloud of dust as the rear wheel slid around under me and the knobby Ceat tyres found grip in the loose dirt. The massive 21-inch front wheel made short work of large obstacles in my path, and when I caught air a couple of times the cushy suspension ensured a comfortable landing. The brakes, with their lack of initial bite on the road, seemed better suited to the dirt and provided decent feedback without threatening to lock up, although we are somewhat disappointed that ABS is not included in this update. 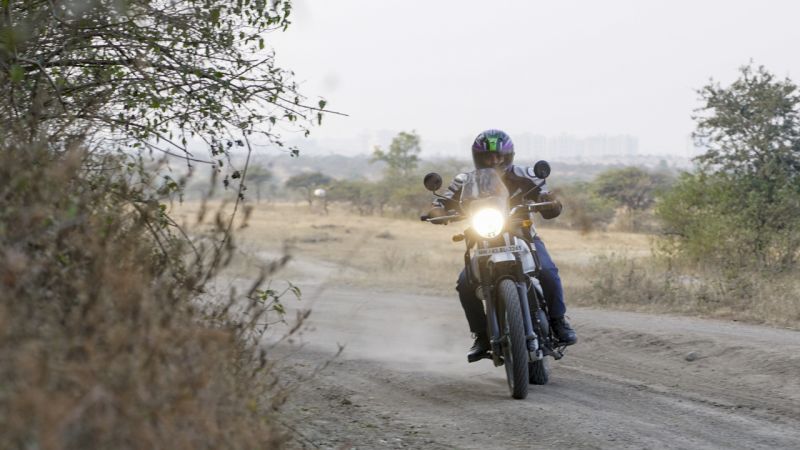 After spending most of the day with the Himalayan on varied surfaces, I can safely say that this is one of the most versatile bikes available in the market today. It combines a comfy riding position and perfect ergos with decent on-road manners and excellent off-road ability, in a package that costs just under 2 lakhs. It would make an excellent starter motorcycle for someone looking to get into trail or off-road riding, and is tough enough to take a few falls without any serious damage. The fuel injection system has worked well to smooth out the engine, but for a motorcycle that weighs nearly 200 kilograms, 24.5 PS of peak power seems a little feeble, and that is my only grouse with this motorcycle. Although the bike pulls strongly through the midrange, power starts dropping drastically as revs increase; we would love to see a Himalayan with a more powerful mill sometime soon, as that would really be a blast! 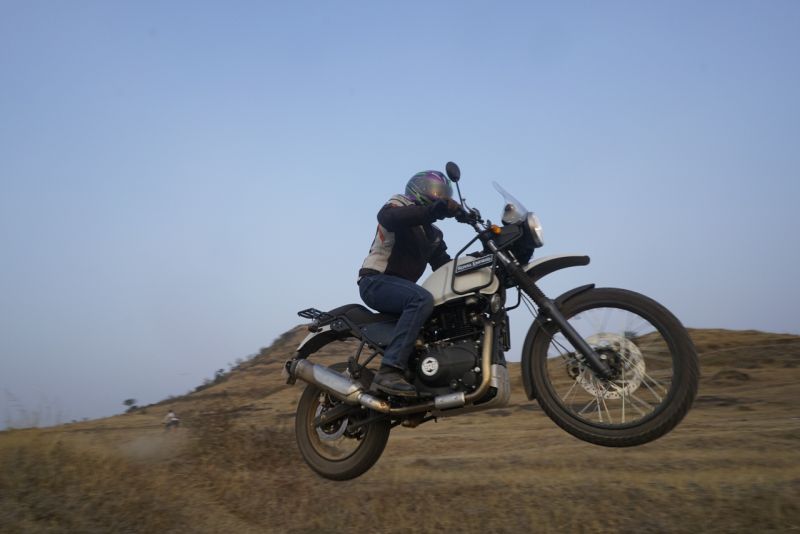 With a wide range of abilities and the adaptability to tame the worst terrain, the Royal Enfield Himalayan Fi is a worthy successor to the name, and continues to be the only budget-friendly adventure bike you can buy in India.