After a short briefing by Chaz as to which gear to use for each of the corners and where to short shift, it was time for the ride of my life as no Indian, journalist or racer, has ever ridden a factory superbike racing motorcycle. For the first time in my life I had a bike fired up and ready for me to ride. As I swung my leg over the bike, the first thing I noticed was that the ride height was set up 1.5 to two inches higher than the Panigale R’s. I selected the first gear and received a good push from the mechanics so that I would not burn the clutch as the first gear is very tall, almost like the second on the standard R. I exited the pit-lane in first with the pit-lane speed limiter on. The limiter switches off automatically the minute you exit the pit-lane and select the second.

As I exited the last chicane in the first gear and powered down the start-finish, the front was just about skimming the tarmac and the clip-on handlebars were moving side to side. The bike was a little cranked over as I shifted up to the fifth, while approaching the Tamburello chicane, and hit the brakes at my braking point. I realised that I had arrived at my braking point carrying about 25 to 30 km/h more than on the R. Now it was time for some real hard braking and the rear wheel was in the air and it was down to the second gear and I still made both the apexes thanks to the phenomenal stopping power of the brakes and the unbelievable grip offered by the Pirelli slicks. It was down to the second gear for the Tamburello chicane as compared to the third on the Panigale R. It was up to the fourth before hitting the brakes and down to the second for the Villeneuve left-right. 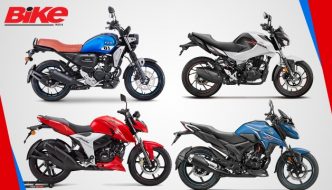