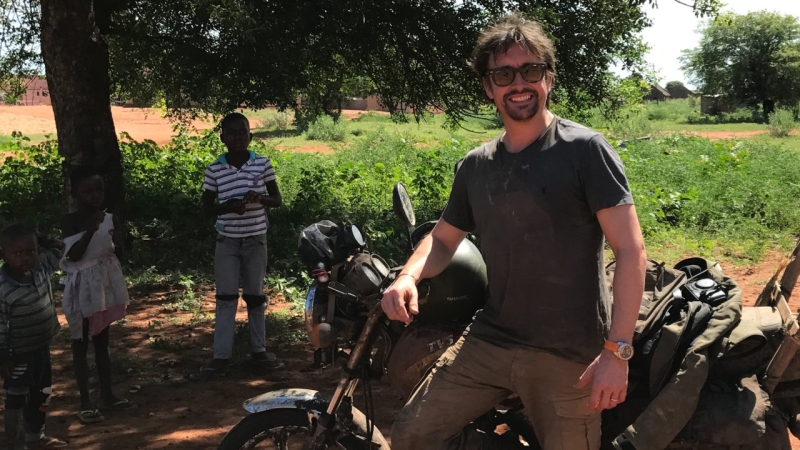 Richard Hammond is a household name for auto-enthusiasts the world over, and few days back, he gave his fans quite a scare when reports emerged of a bad crash that resulted in a concussion. While filming for his show The Grand Tour that he co-hosts with Jeremy Clarkson and James May, Hammond was riding what looks like a TVS Max 100R in the picture above which he posted on his DriveTribe page. We are also glad to see that he had a helmet under his elbow, which indicates he had taken the basic safety precautions.

Hammond posted an update on the aforementioned page to assure his followers that he is okay, titled ‘I’ve Checked and I’m Not Dead’ – that’s reassuring. He said, “It’s true, I did fall off a motorbike whilst filming recently for The Grand Tour in Mozambique. I banged my head, yes, along with pretty much everything else apart from my left thumb, which remains un-bruised. Can’t tell you more yet about the how and why of it; that’s all for later in the year on the show. As for injuries; well put it this way, I don’t think I can get a book out of it.”

What the Hamster was doing riding an old 110-cc TVS commuter in Southern Africa is anyone’s guess, but I’m sure we will find out in the next series of The Grand Tour. As fans of the show, we are just glad he came out of the accident in one piece. Although, he might have to put up with some harsh ribbing from his co-hosts off the back of this latest crash, including a certain Captain Slow quipping, “Does that mean he’s not coming on then?”