The 2013 MotoGP season is just around the corner and Repsol Honda have finally revealed their 2013 livery. At an event held in Madrid, Spain MotoGP riders Dani Pedrosa and Marc Márquez along with Repsol Honda VP, Shuhei Nakamoto unwrapped the bike on the stage. Speaking to the media Nakamoto said, “the bike was not a radical redesign, but a continual evolution from last season. With a 3kg weight increase to cope with, and the team had had ample time to prepare the machine for this season, sighting that the main differences are a bit more power, as well as better fuel efficiency. Yet the bike is still based on the model that was brought in for the Laguna Seca round last year for Pedrosa.”

The event, witnessed familiar faces in the form of Dorna CEO Carmelo Ezpeleta along with Alberto Puig and Emilio Alzamora. The 2013 bike’s new colour scheme has somewhat a different approach from the typical Repsol scheme that has been present over the years incorporating more whites than orange. Nakamoto also added that he expects Pedrosa to continue his blistering form from the end of last year and challenge for the title, whilst saying that with Márquez’s talent he expects the rookie to be on the podium. He acknowledged that Márquez was very quick over one lap, yet sighted tyre management as the main thing he will have to pick up. Livio Suppo was also announced as the new team principal for the 2013 season. 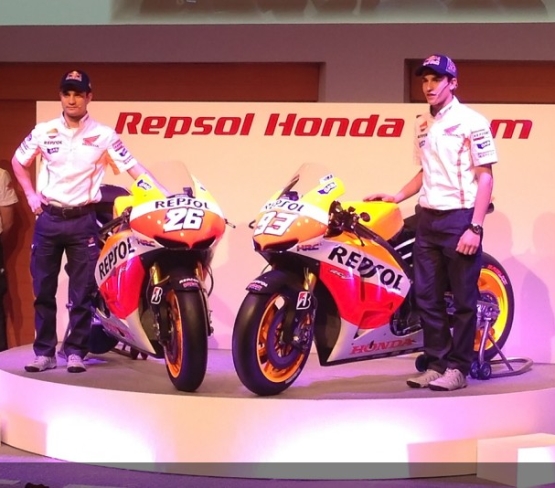