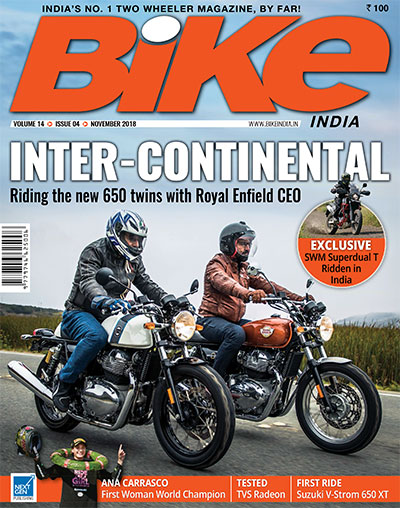 Worth the Wait
IT HAS BEEN NEARLY ONE YEAR SINCE ROYAL ENFIELD UNVEILED THE INTERCEPTOR 650 AND the Continental GT 650 at the Milan Motor Show and, finally, last month I got an opportunity to ride both the bikes in Santa Cruz, California. I was wondering why I had travelled half way round the world to ride motorcycles manufactured in Chennai, India. I got my answer after the ride; because these were among the best roads I had ridden on and probably the best in the world.

The reason for the delay was that Royal Enfield did not want to take a chance with these bikes, being intent on ironing out all possible issues before the actual launch of the two twins. I was really impressed by these two motorcycles that Royal Enfield have come up with. The second surprise for me was the riding capability of Siddhartha Lal. A number of CEOs and MDs say that they can ride a motorcycle, but Siddhartha can genuinely ride well. We were riding hard and he kept up with us. His passion for riding also shows in the products he has launched. This time Royal Enfield have really nailed it.

The cost of fuel is on a northward trend on a daily basis and, needless to say, this hurts the ordinary man, especially the lower middle class who rely mainly on two-wheelers. The government knows that one needs to buy fuel for one’s daily commuting; it is a necessity and not a luxury. This rising fuel cost will also have an adverse impact on the sale of new motorcycles and scooters. They claim that it costs more to build new roads than the road tax paid by the citizenry, which, by the way, is among the highest in the world. Furthermore, if the road happens to be half
decent, one has to pay toll for that “luxury”.