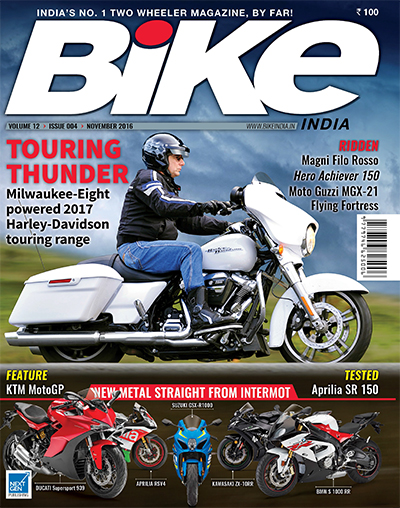 THE TWO-WHEELER MARKET IS SHOWING GOOD SIGNS OF growth as the month of September saw record sales for most two-wheeler manufacturers, with a major surge coming from the rural market. The big worry for the Indian market is what will transpire in the cross-border tension with Pakistan as none of us can afford a full-blown war.

Last month we were invited to Tacoma, USA, to ride the 2017 touring range of Harley-Davidson motorcycles. The 2017 range gets all-new 1,745-cc (107 cubic inches) and 1,868-cc (114 cubic inches) engines. These new engines are OHV single cam with four valves per cylinder instead of the twin cams and two valves in the old ones. The 107 cylinder-heads are oil-cooled and the 114 cylinder-heads are water/coolant cooled. The new family of engines is known as the Milwaukee-Eight because of the eight valves.

The two-wheeler market will see a lot of action before the end of the year as Bajaj Auto are preparing to launch the new 400 as a new brand, called the Kratos. The big news is that BMW Motorrad are all set to enter the Indian market before the end of the year with a complete range of motorcycles starting with the 310 and going all the way up to the 1,600. The only one missing from the line-up will be the GS800 since it requires complete homologation. The entry of BMW Motorrad into India will shake up the premium motorcycle market.

The registration of new two-wheelers was at an all-time high during the Dasara festival; this being the second month in succession that we saw a big rise in two-wheeler sales. With such record sales we are going to see more vehicles on the already crowded city roads.

Bike India Team – who has written 983 posts on Bike India.