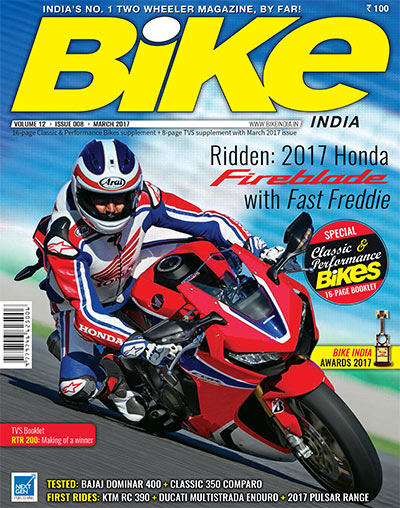 LAST MONTH WE HAD THE BIKE INDIA AWARDS AND TO pick a winner was a tough job, there being a number of strong contenders starting from the 110-cc Hero iSmart all the way up to the big 1,200-cc motorcycles. The standout bike and the overall winner for Bike India Awards was the TVS RTR200 4V.

The fifth Cartier Concours d’Elegance was held last month in Hyderabad and it was a grand event. However, the one thing that intrigues me is the parameters for judging. The Velocette Venom that was given the runner-up prize has quite a few components that are not original to the motorcycle. To start with, it is a 350-cc Viper converted into a 500-cc Venom. The cylinderblock, piston and the cylinder-head are not from the original bike. The standard fitment for this model was Amal monoblock carburettor and not TT carb. The Venom did not come with rear-set foot-rests, clip-on handlebar and the headlamp had a nasal and not an open unit. Even with so many parts having been changed, the bike still manages to win an award at such a prestigious event.

When will the change come to India? It does not matter how good you are or your bike; what does matter is whom you know and that will swing the result in your favour.