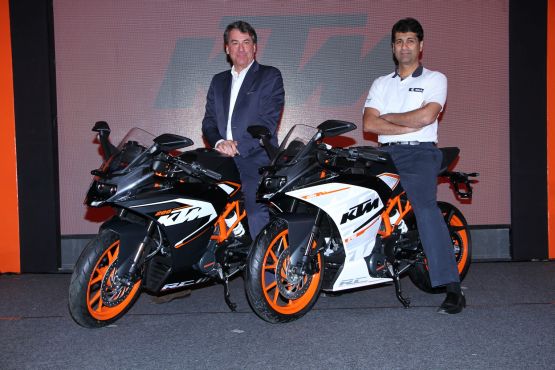 KTM and Indian partner Bajaj Auto have introduced the Austrian make’s supersport RC series with the launch of the RC 390 and the RC 200 in India. Priced at an astoundingly attractive Rs 2.05 lakh for the RC 390 and Rs 1.6 lakh for the RC 200 (both prices ex-showroom in Delhi), the bikes will surely feature on the wish list of several bikers, both aspiring or veterans.

The flagship RC 390 uses the same 375cc fuel injected liquid cooled single cylinder four stroke engine as the Duke 390 and, like the latter, features four valves and double overhead camshafts (DOHC). Peak output for India is rated at 43.5 PS and 35 Nm developed at 9000 RPM and 7000 RPM respectively. The smaller RC 200 meanwhile borrows the Duke 200’s 199.5cc fuel injected liquid cooled four stroke single pot motor, putting out 25 PS at 10000 RPM and 19.2 Nm at 8000 RPM. In both cases transmission is via a six-speed gearbox.

Both motorcycles are fully faired and offer similar visual appeal, separated only by the colour of their respective fairings – white in the case of the RC 390 and matte black in the case of the RC 200. Cycle parts like the orange painted steel trellis frame, the 43mm upside down WP front forks with 125mm of travel and the pre-load adjustable WP monoshock with 150mm of travel are shared between the two. However there is a significant weight difference with the RC 200 being 12 kilos lighter at 147.5kg than the RC 390, which tips the scales at 159.5kg. Tyres too are different with the RC 390 being shod with Metzeler rubber while the RC 200 gets a pair of MRFs. Both bikes also get several segment firsts, including twin projector headlamps, LED daytime running lamps that can be used at the rider’s discretion, LED tail lamps and a unique body integrated pillion seat with under seat grab handles.

Braking duties are taken care of by a 300mm dia disc up front with four-piston floating calipers by Bybre and a 230mm dia disc at the rear. Sadly though, while ABS is standard fitment on the RC 390, the smaller 200 doesn’t get that crucial safety kit even as an option. Hopefully KTM and Bajaj will re-think that decision in the near future.

Read our detailed first ride report on the two bikes in the October issue of BIKE India.