Reality seldom bears out advert spiel. That’s common experience. The KTM 790 Duke, which also marks the inception of a whole new middleweight platform for the Austrian marque, seems to be an exception, though; for we found out that it did live up to the hype during our first ride in the hills of Gran Canaria. 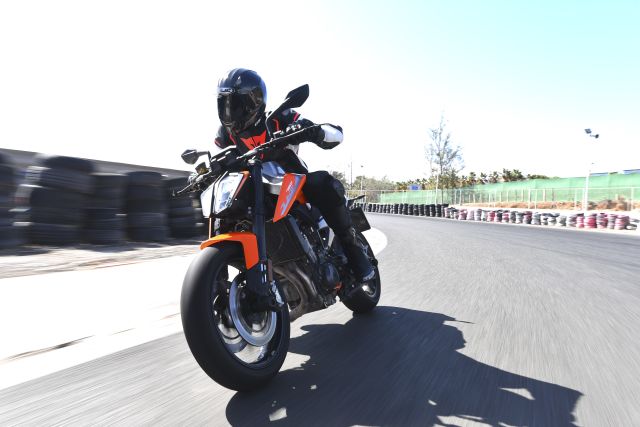 “Maximise the thrill of the ride”

KTM’s marketing slogans seemed over-the-top when they were used earlier, during the press conference. After all, this new Duke is a mass-market, 105-PS naked middleweight, not some exotic sports bike dripping with lightweight parts.

But it’s hard to argue with claims of sharpness and thrills as I aim the 790 through another set of bends in the hills of Gran Canaria. On the straight sections the KTM has been making the most of those 105 horses, leaping forward with a brilliantly crisp power delivery, revving hard and smoothly through the box with the aid of its two-way quick-shifter, and making a rorty twin-cylinder thrapping sound through its high-level pipe in the process. 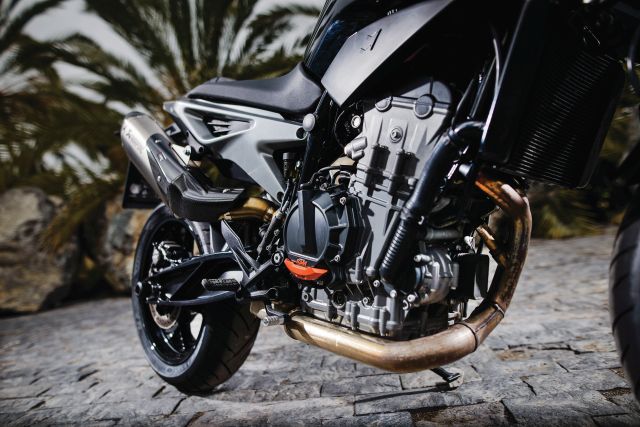 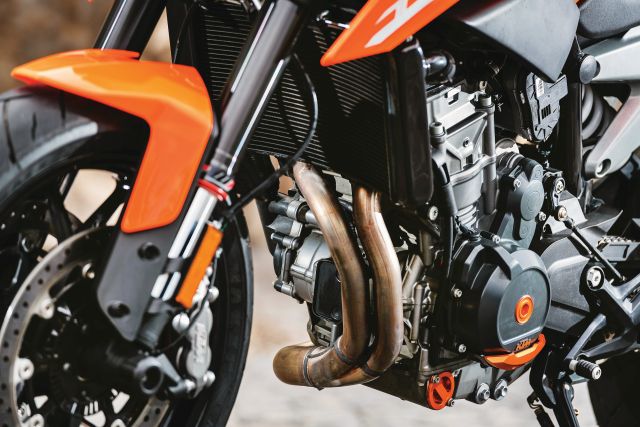 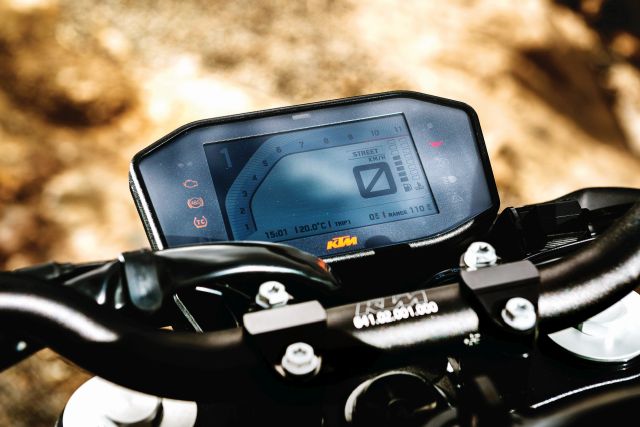 And in the twisty bits it’s every bit as entertaining: steering sweetly in response to a nudge of its wide bars, staying very stable under both braking and acceleration, and finding plenty of grip as we crank through the seemingly never-ending strings of hairpins. We’re approaching the end of a day spent mostly with the throttle wound open, including a thrash at the Maspalomas circuit, and the 790 has done a good job of living up to the hype.

Serious marketing effort was only to be expected, because the 790 Duke is a hugely important bike for KTM — not just a new model but the start of a whole new middleweight platform. With its typically sharp-edged lines, it fills the large gap between the 690 Duke and 1290 Super Duke models in the Austrian firm’s street bike range, and will be the starting point not only for other KTMs, including an Adventure, but for sister brand Husqvarna, too. 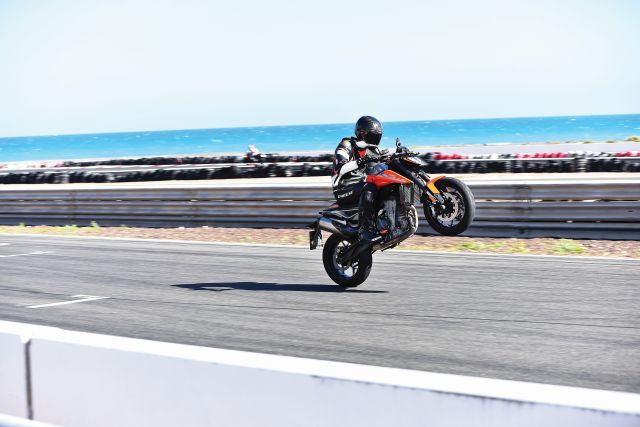 KTM’s development team considered a mid-sized V-twin before deciding that a parallel twin, more compact and less expensive to produce, was a better bet. The 799-cc, DOHC eight-valve unit (which KTM call the “LC8c”, for Liquid-Cooled 8-valve, compact) has its crankpins offset by 75 degrees to give an irregular firing order. It is tuned as much for mid-range torque as top end. Although the 86 Nm maximum is generated at 8,000 revolutions per minute, it makes over 70 Nm from 3,000 rpm, and over 80 Nm from below 6,000 rpm.

The engine’s two balancer shafts allow it to be employed as a stressed member of the frame, which, in KTM tradition, is made from tubular steel. An aluminium rear sub-frame encloses the air-box, whose intakes are below the seat on either side. The WP suspension specification is basic, with non-adjustable 43-mm forks and a rear shock with adjustable preload (using a C-spanner rather than remote knob). 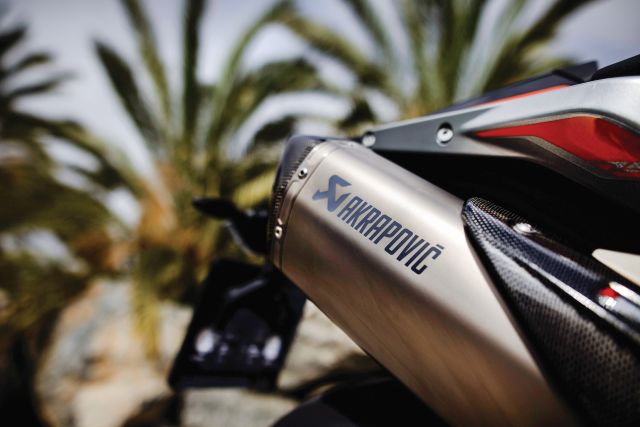 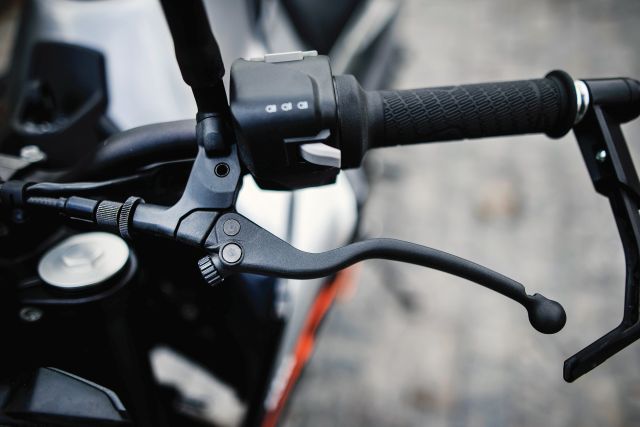 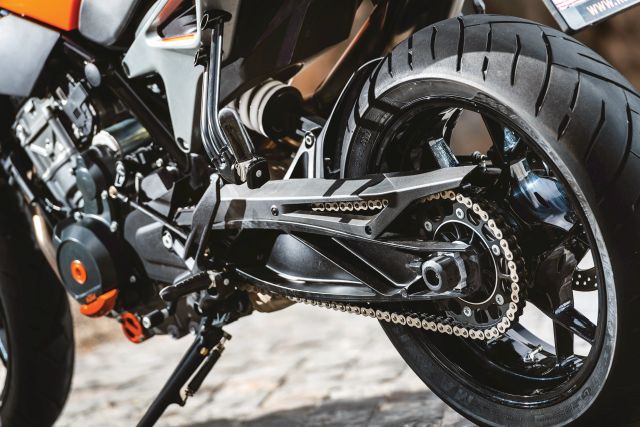 Where the 790 is definitely not basic is in its electronics, which set new standards for the middleweight class. The Duke follows KTM’s big V-twins in using a five-axis IMU to provide high-level traction control, plus independent anti-wheelie and cornering ABS braking as standard, along with four riding modes.

It also has a neat TFT display, operated by an updated and easier-to-use version of KTM’s familiar four-button switchgear on the left handlebar. A press of the “Up” button changes the digital display to allow selection from the four riding modes, one of them a Track setting that gives extra functionality, including on-the-fly adjustability of the traction control, and the option of turning off the anti-wheelie function.