Kabira Mobility, an EV manufacturer based in Goa, has introduced two new electric motorcycles, the KM3000 and KM4000, in the market. 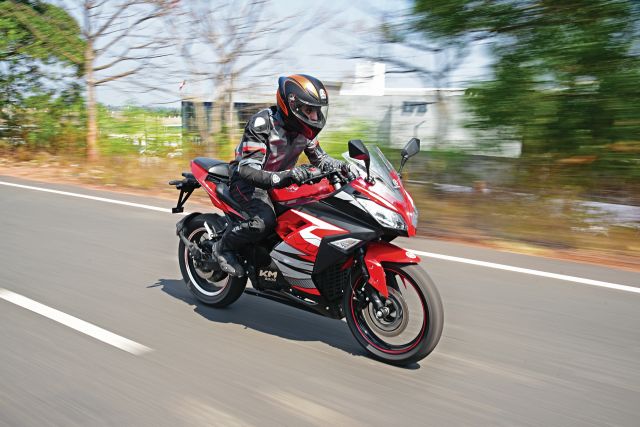 We had first seen Kabira Mobility display its range of electric scooters at the Auto Expo 2020. Alongside these scooters, pre-production units of the KM3000 and KM4000 were also displayed. While the KM3000 is a fully faired offering, the KM4000 is a naked streetfighter. Kabira Mobility claims that according to its market research, customers prefer a naked motorcycle to a fully faired sports bike. This is why the KM4000 is the top-spec model here. We were invited for an experimental ride recently. Here is what they are all about. 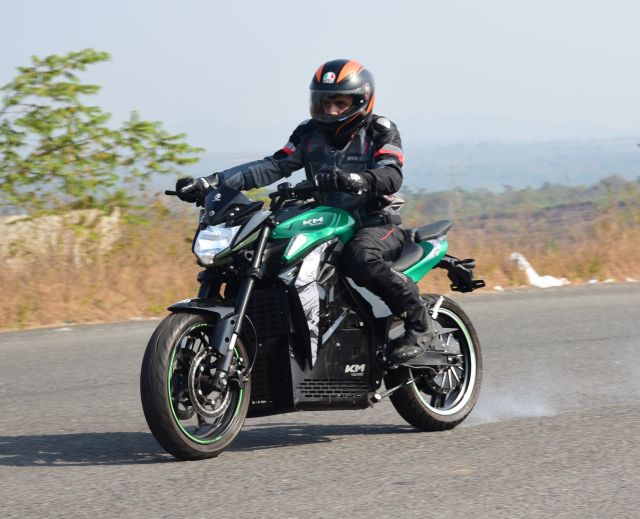 If you are a motorcycle enthusiast, you will surely be reminded of the Japanese motorcycle manufacturers, Kawasaki, after a quick glance at both the KM motorcycles. The KM3000 makes use of a tank and body panels that are identical to those of the Ninja 300. On the other hand, the KM4000 resembles a combination of the Z1000 and the Yamaha FZ S. It uses what looks like a scaled-down tank and body-panels of the Z1000 and the headlight unit of the Yamaha FZ S. 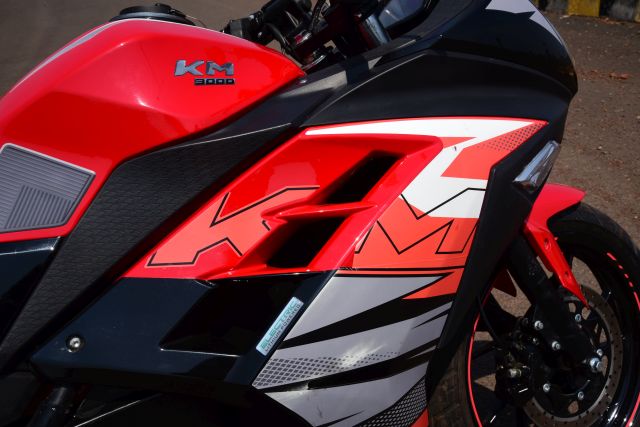 A closer look revealed that the fit and finish were slightly disappointing, probably due to the fact that we were given prototype models that have been used for testing for quite a long time. Another noteworthy fact is that there are two identical made-in-china EVs from Jiangsu Zhongxing, called the Python. These Chinese electric bikes have slightly differing specifications and the naked model sports the headlight unit from the Z1000. Thus, unfortunately, we did not see any originality in terms of the design and styling and we do hope to witness better quality in the production model. 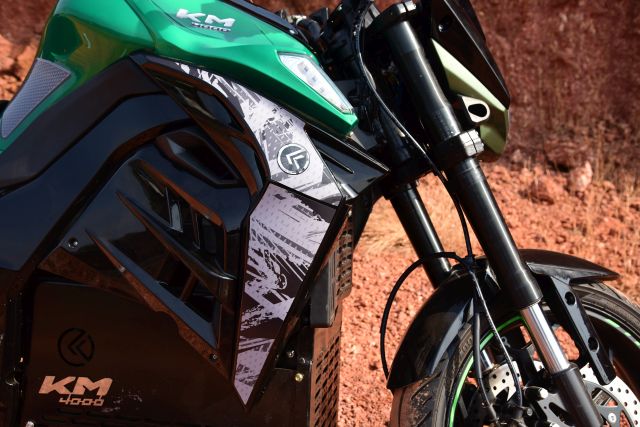 The KM3000 uses a six-kW BLDC motor which gets its power from a four-kWh battery pack and the KM4000 uses an eight-kW motor which is powered by a 4.4-kWh battery pack. Both bikes sport different consoles: while the KM3000 has a fully digital display, the KM4000 gets a TFT colour display that can be connected to the user’s phone via Bluetooth to assist with navigation, calls, music, and so on. Both bikes get three ride modes (Eco, City, and Sport) and these can be switched on the go. Kabira Mobility claims that the KM3000 has a range of 120 kilometres and can attain a speed of 100 km/h, while the KM4000 can go 150 km on a full charge and attain 120 km/h. These claimed range figures can apparently be achieved in the Eco mode only and the claimed top speed in the Sport mode. 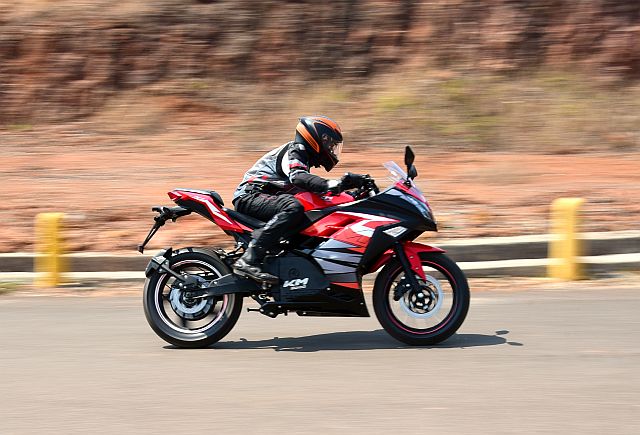 I got a chance to ride both the motorcycles back to back for a short period of time. I started off with the KM4000, which is surely the more powerful of the two, but not exactly what Kabira Mobility claimed. They also revealed to us that the consoles were not calibrated and hence would not display accurate speeds. In the Sport mode with the throttle whacked open on the KM4000, it felt like I was going at a max speed of around 70 km/h. The riding position of the KM4000 is like that of a stunt bike. The large tank keeps the rider’s legs spread wide apart and the body upright, while the single-piece handlebar tapers upwards to the ends just as we have seen on motorcycles that have been modified for stunt riding. The KM3000, on the other hand, gets a slightly higher seat with rear-set foot-pegs and places the rider slightly forward towards the clip-on handlebar. 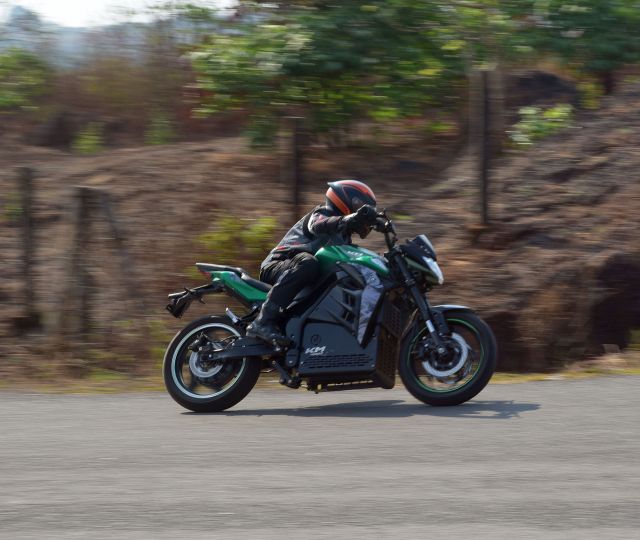 The braking set-up on the KM3000 comprises disc brakes at both ends, while the KM4000 gets dual discs at the front and a single disc at the rear. Kabira Mobility says that it will only be focusing on CBS (Combined braking system) instead of ABS for these motorcycles. Unlike other electric motorcycles, the rear brake lever has also been fitted on the left side of the handlebar. This set-up is more like that of a scooter and takes some getting used to. Since the KM4000 is the higher-spec model, it is also fitted with an upside-down (USD) fork at the front. The suspension was really stiff on both the bikes and felt very unstable over a few bad sections of the road with a lot of rattling at the front end. The company claims that it is still working on the suspension which will become better in the production-ready model. Unfortunately, both my rides came to an abrupt end in the middle of the road as the bikes ran out of juice, which made me think about the actual range that these motorcycles offer. 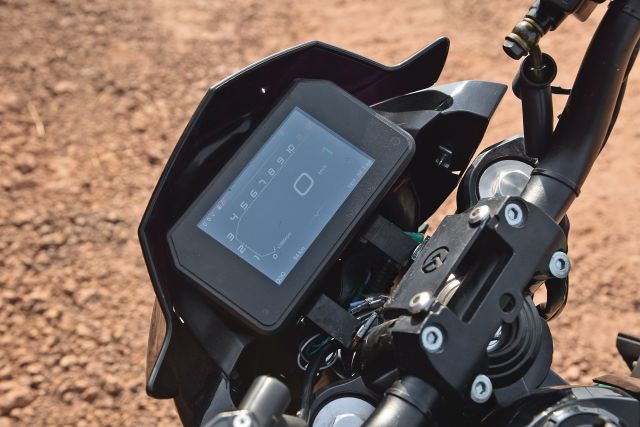 Apart from that, the bikes have a system that cuts power to the motor every time either of the brakes is applied. This is a feature probably aimed at safety, but, practically speaking, such a feature makes it almost impossible to take sharp U-turns on the bike. Let us say you are in the middle of a U-turn with the bike leaned over and you tap your finger on either of the brake levers: you will have to get your leg down instantly to keep yourself from falling. 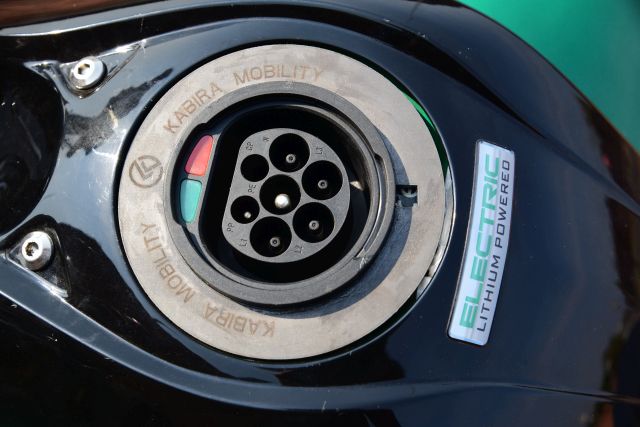 The bikes have now been launched in Goa for an on-road price of Rs 1.27 lakh (KM3000) and Rs 1.37 lakh (KM4000). Kabira Mobility promises to begin deliveries in the next two months. Overall, it is good to see the initiative by Kabira Mobility to offer sporty-looking electric motorcycles to appeal to young riders. I only feel that they should have taken their time to work on and better these machines before we got a chance to ride them. It would be prudent to wait for a few months before thinking of buying one of these electric bikes.