Is the BS6 Hero Glamour all show and no go? Is it more than just a pretty face? We look beyond the Glamour’s glamour for the answers. 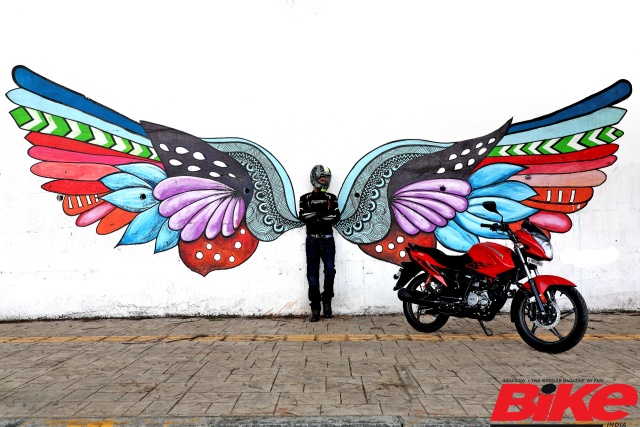 Fifteen years ago (when I was still at school), my boss tested the Hero Honda Glamour for Bike India’s first-ever comparative test. Since then, many events have taken place in the Glamour’s life-cycle. While the motorcycle from the pages of the 2005 magazine and the new one bear a lot of resemblance, they also display the evolution they underwent over time. For starters, the new one is friendlier to the polar ice caps and it no longer features “Honda” anywhere. That is because this is one of the latest products to emerge from Hero’s new facility full of brains — the Global Centre of Innovation and Technology. Just how much has the Glamour changed over the past 15 years?

Even today, the Hero Glamour’s objective remains the same — capture the 125-cc premium commuter segment — but it finds itself in the BS6 generation of motorcycles. You know how you look at a father-son duo and think how remarkable it is that they are quite alike but still distinct at the same time? The same could be said of these two generations of the Glamour. The new one wants no extra fat. It aims to be efficient and precise without any extra flair. Its gorgeously sculpted tank is flanked by muscular shrouds that complement its shape without trying too hard. The side-panels are doused in gloss black and serve as a visual bridge between the front and tail sections. The latter, with its pseudo side scoops, chequered graphics, and curves, is still fairly reminiscent of the motorcycle from 15 years ago. The silver clutch and alternator covers contrast rather well with the blacked-out lower half of the motorcycle. The Glamour does not get a spot of LED lighting and that is hardly bad news because the headlamp illuminates the road well while the “H” logo in the tail-lamp makes it easily visible and distinct at the same time.

‘The riding position is great for city commuting and the seat and tank interplay is perfect.’ That is what the Ed had to say about the first Glamour and the same rings true even today and it also seats the pillion in reasonable comfort. Not much has changed with the instrument cluster either. Now it is a simple analogue-digital cluster that features a speedometer, odometer, trip meter, fuel-gauge, tell-tale lights, and the i3S light. The only piece of sophistication appears to be the real-time fuel-efficiency indicator. 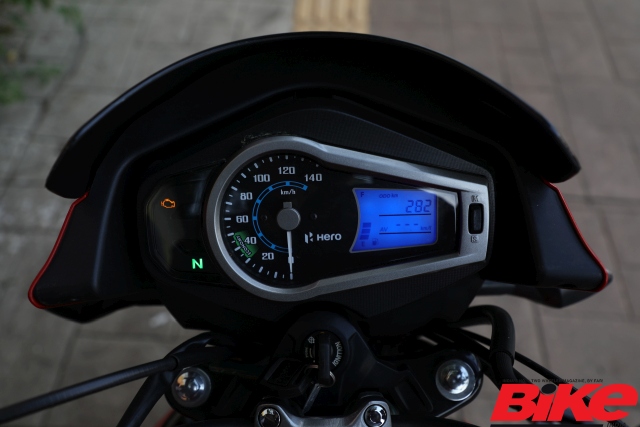 Speaking of fuel-efficiency, the i3S is rather useful to have if your route has stop-and-go traffic. Within 10 seconds of idling, the system cuts off the engine and when you pull in the clutch lever, it comes back to life again. It contributes to the fuel-saving efforts of the BS6, 125-cc, air-cooled, two-valve, SOHC, single-cylinder engine that develops 10.9 hp at 7,500 rpm and a peak torque of 10.6 Nm at 6,000 rpm while mated to a five-speed gearbox. This is an all-new mill and it sits upright in an equally new frame unlike the almost horizontal sloper configurations seen earlier.

Select first gear and let out the light-action clutch to send the Glamour sailing into the urban chaos. Its well-proportioned body, manageable weight, and manoeuvrability make the river of endless motorists seem less irritating than usual. Should a hazard on wheels cut across or swerve or just decide to stop in the middle of the road to buy groceries, the Glamour’s brakes will save you from strumming the harp with a halo over your head. Braking has certainly received a significant update as compared to 15 years ago because Hero are offering a disc-drum set-up with a combined braking system. The three-piston Bybre caliper that bites on a 240-millimetre disc at the front may just be the best in the segment because it returns enough feel and feedback to encourage confident and aggressive braking. Our numbers say that the motorcycle sheds off 80 km/h and comes to a standstill in 2.91 seconds after covering 30.48 metres. That is better than its larger sibling, the Xtreme 160R. 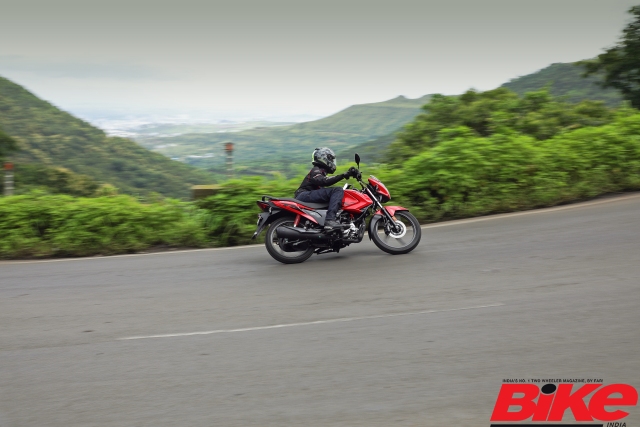 Speaking about the old Glamour’s handling, the Ed had said, ‘It is a neutral handling bike and that is its greatest virtue.’ Thankfully, Hero have kept that formula intact with this one as well. The Glamour’s brilliance lies in the fact that it does what it was meant to do beautifully. Its healthy mid-range works well with the closely spaced gear ratios and keeps the Glamour in its sweet spot of 50 km/h. It pulls from 0 to 60 km/h in a respectable 7.37 seconds, more than two seconds faster than its forebear. The suspension set-up is plush and lets the Glamour waft over poor roads and retain confidence while carrying speed through a corner. More importantly, I was able to dismount after hours of riding with no pain in my limbs or lower back. (Did you also sigh with relief?) 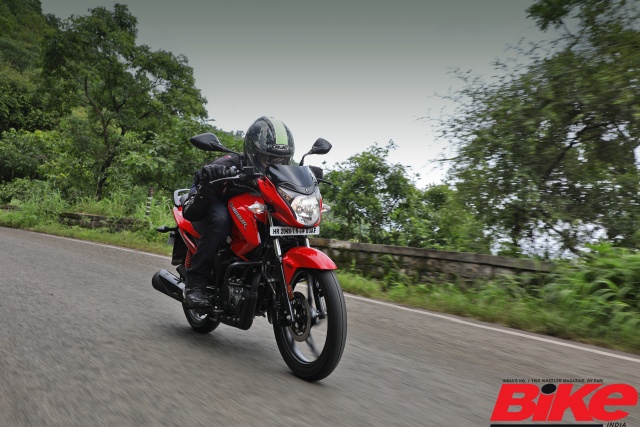 The Glamour was never meant to be a DQM (Damn Quick Motorcycle) and its lacklustre top-end limits it to 96.72 km/h at full trot; but, hey, we are not complaining. For the asking price of Rs 74,216 (ex-showroom), the Glamour is the most accessible in the segment that it currently shares exclusively with the Honda SP 125. However, by putting your money down on one you must understand that you are choosing to ignore some of its minor faults. That includes the harsh character of the engine which knocks off a point or two in terms of refinement and an inaccurate fuel-gauge. While they are not deal-breakers, they cannot be ignored either. 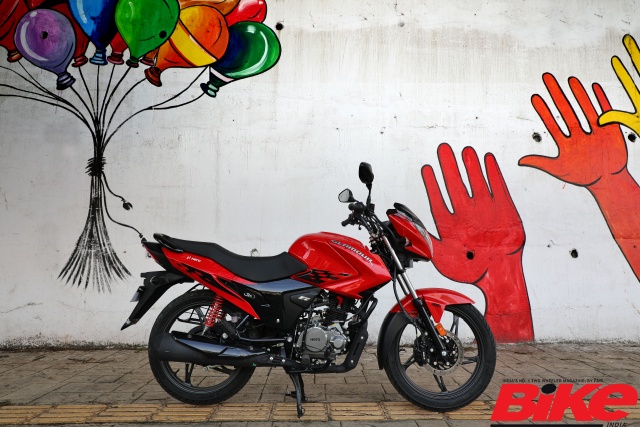 In the 2005 story’s conclusion the Ed said, ‘It is a most accomplished bike which has been made with a single moot purpose and that is to make Passion owners upgrade to within the family with the same core values of refinement, high fuel-efficiency and style being packed in bulk.’ For this story’s conclusion, we would like to add to that by saying Hero have done a commendable job in retaining the core characteristics of the original Glamour even after 15 years while admirably progressing in the right direction. 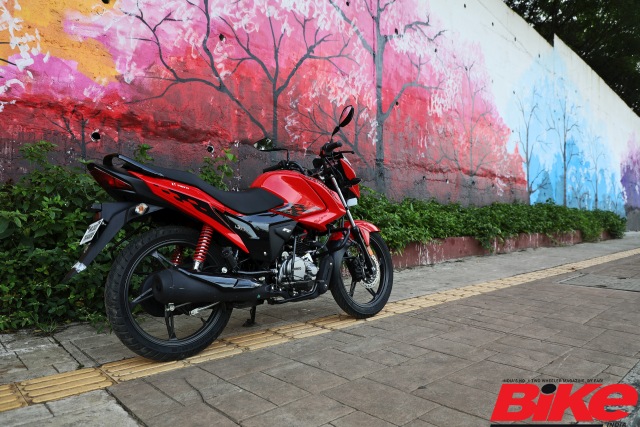