Backed by an elite R&D team, Hero MotoCorp have taken off in a new direction and we find out what their first step, the Xtreme 160R, has to offer. 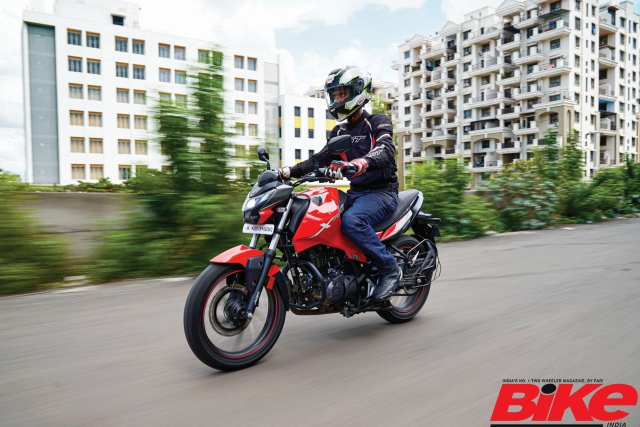 Loose-fitting jeans were the rage 10 years ago but now it is difficult to find anything other than those skin-tight monstrosities. Mobile phones with buttons were fashionable until touchscreens came along. Now the elderly are playing Temple Run and beating their grandchildren at it. 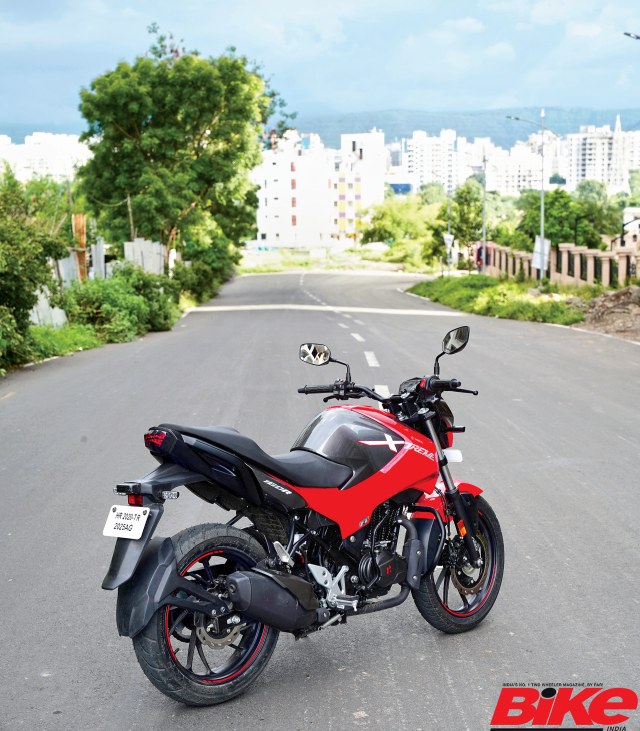 The same wind of change is blowing through the 150-cc motorcycle segment. Manufacturers are not launching any new models in that class because the consumer is also swaying towards the slightly larger 160-cc segment.
It was only a matter of time before the largest motorcycle manufacturer in the country decided to raise its sails (pun intended) and make the most of these winds of change. Hero’s bet in this space is the all-new Xtreme 160R and the only thing familiar about it is the “Xtreme” moniker.

The 160R is the first product from Hero’s newly assembled elite R&D team at their global Centre of Innovation and Technology (CIT). As promised, the motorcycle’s design language is similar to the Concept 1R that was showcased at EICMA 2019 and it marks evolution in the right direction. Well, for most people anyway. Our Instagram posts of the motorcycle have received mixed reactions in the “comments” section with considerable participation on both sides of the styling opinion. Personally, I like it. This is among the most interesting designs from the marque after the first Karizma and the latest Xpulse 200. 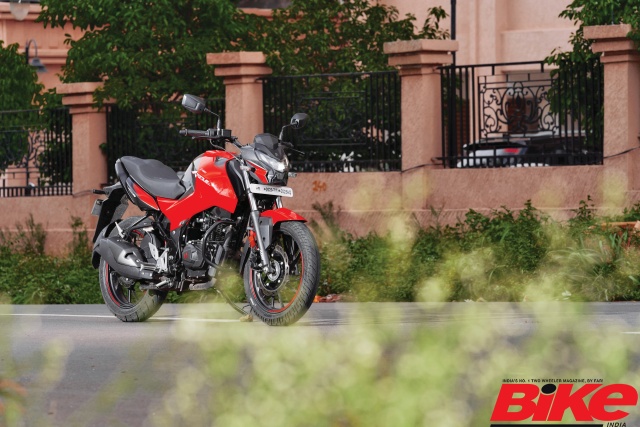 The Xtreme 160R’s road presence comes from its shredded appeal, evident from the LED headlamp that could easily pass off for a Transformer’s face. Fuel-tank shrouds on either side work wonders for the motorcycle the same way shoulder-pads made some pop stars rather stylish back in the day. From there on, the 160R is on a diet. The subframe cowls are shapely but compact and so is the exhaust. I particularly like how Hero have thoughtfully replaced the conventional grab-rails with under-seat holds that are neatly integrated into the cowl. 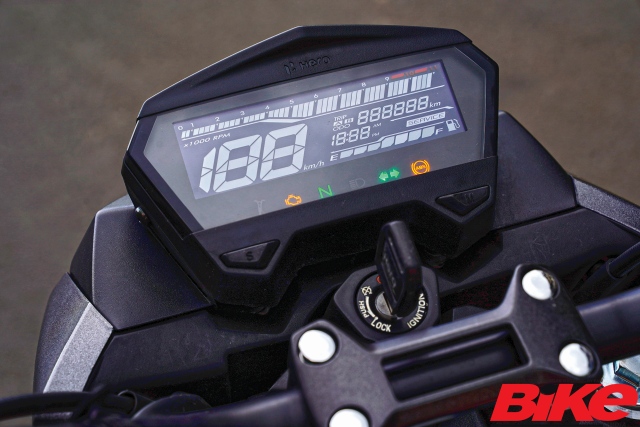 Information is relayed to the rider through a simple digital unit that does not receive the smartphone-friendly options as seen on the Xpulse 200. The inverted LCD shows a speedometer, odometer, tachometer, two trip meters, and a clock along with the usual array of tell-tale lights. Moving on to the switchgear, the left side is busier and, in addition to lighting and horn controls, Hero have also added a switch for hazard lamps. Meanwhile, the right side has only one superbike-style switch that doubles up as the engine-kill switch and the starter. 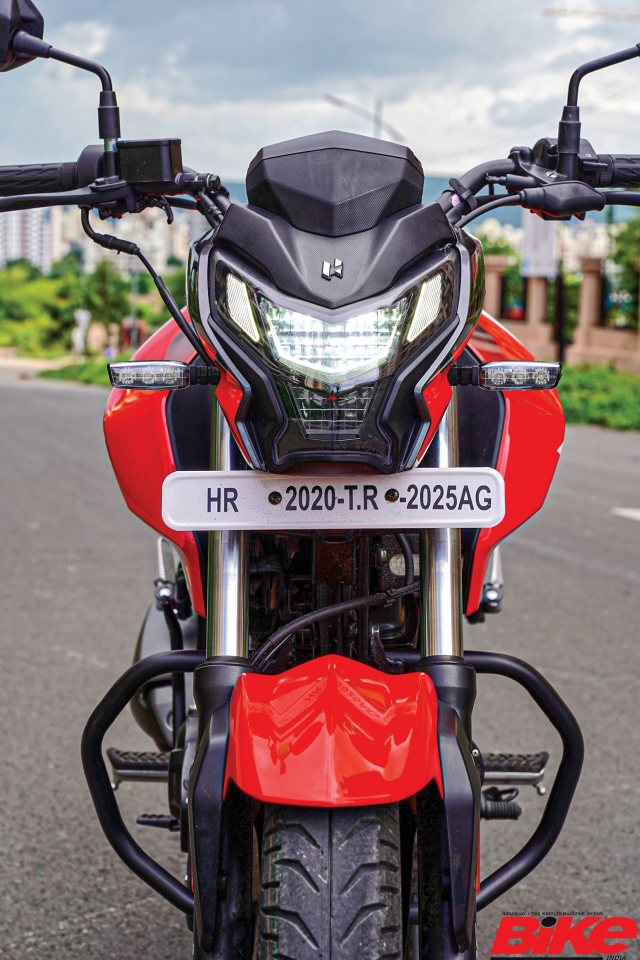 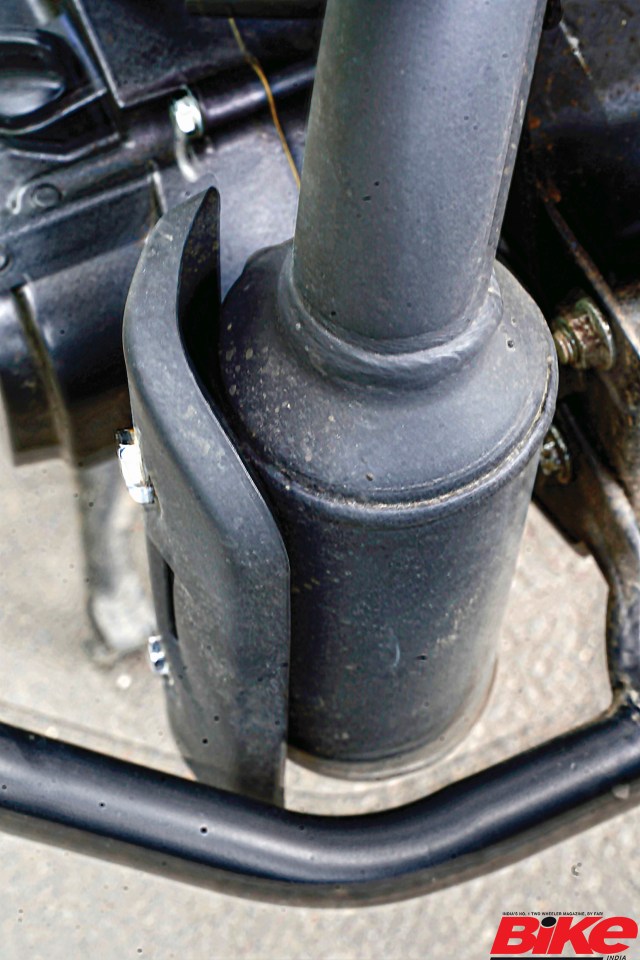 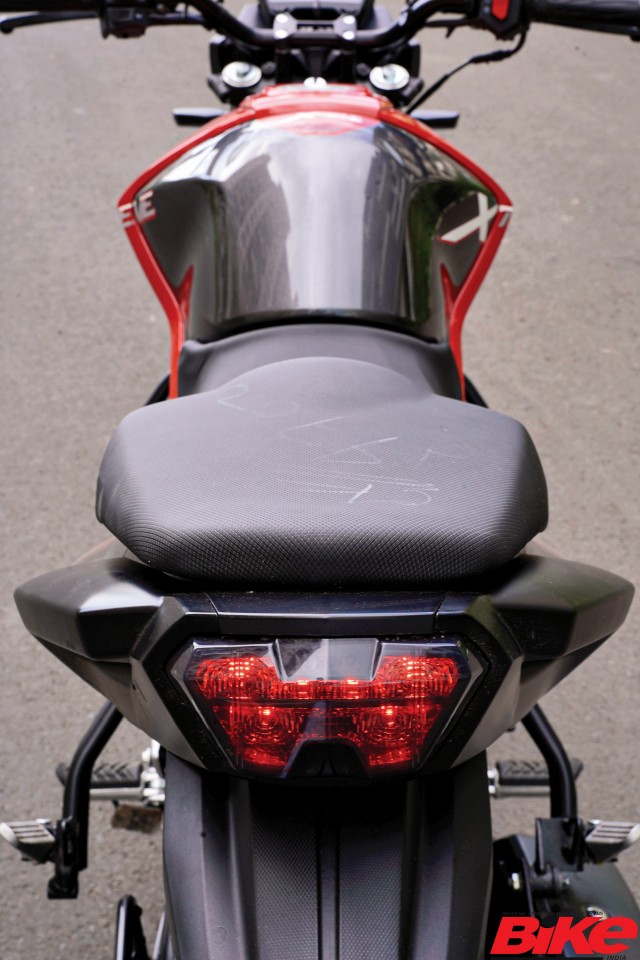 Swing a leg over the Xtreme 160R and you will find that its saddle is a comfortable place to be in. The rider’s end of the well-contoured, single-piece seat is 790 millimetres off the ground but still mighty accessible for most thanks to the way it tapers close to the fuel tank. The tank itself has grooves that allow the rider to latch on to the motorcycle.

In spite of its compact dimensions, the 160R never felt like a toy, even for a tall rider like myself. Arching forward slightly to grip the bar, I found myself in a riding position that toes the line between sporty and practical; committed enough to keep you interested but without the discomfort that is usually associated with a sporty riding position. Similar praise should also be dished out for the pillion seat as well because it turned out to be rather comfortable for urban runs. The pillion seat height mandates that one has to be careful while climbing on or be prepared to get the knitting kit out when you reach home.

Thumb the starter and the 163-cc, air-cooled, single-cylinder engine barks to life with a subtly sporty soundtrack. This one breathes through a two-valve head and receives fuel-injection to comply with the BS6 norms. In the city, the 15.2 hp at 8,500 rpm and 14 Nm at 6,500 rpm seem adequate with judicious use of the well-spaced five-speed gearbox. In the urban chaos, the 160R’s strong mid-range, tractable third gear, light-action clutch, and easy manoeuvrability allowed me to zip past annoyingly slow motorists rather easily but out on the highway, the motorcycle’s Achilles Heel comes to light. Although it accelerates strongly from 0 to 60 km/h within 6.18 seconds — well off Hero’s claimed 4.7 seconds — it begins to run out of breath past the 70-km/h mark. By 90 km/h, all the excitement seems to have gone flat but keep the throttle wide open and after a while it will have you covering ground at 111 km/h.

The 160R’s ride quality on our bumpy city roads was admirable and my lower back was grateful about how the motorcycle soaked up bumps rather nicely and returned a pliant ride. I was also impressed by the refinement levels. There was barely any buzz below 7,000 rpm and the vibration that crept in afterwards was never enough to ruin the experience. Thus convinced that the city run is not something this new Hero is allergic to, we decided to check how it would fare when introduced to a ribbon of tarmac that ran around the side of a mountain. 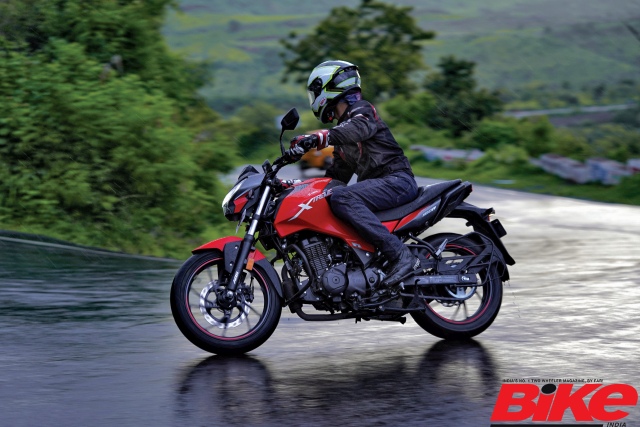 It was almost immediately evident that the 160R was not averse to changing direction quickly. The suspension has enough compliance and the bike does not feel nervous even when tipping into a corner. Once turned in, it holds the line confidently and the crisp throttle response allows one to send it zipping out of a corner enthusiastically. The tubular diamond frame, 37-mm Showa telescopic fork, and the seven-step preload-adjustable monoshock sit on 17-inch alloys at either end. The front is wrapped in a 100/80 MRF Nylogrip Zapper while the rear gets a 130/70 MRF revz-S radial. This rubber offers a good level of grip, decent feedback, and is reasonably predictable in the wet too. The tyres also play a significant role in how quickly the 160R sheds speed. Although Hero have overlooked dual-channel ABS for a single sensor at the front (again), the braking is quite all right. There is enough feedback at the lever to scrub off 80 km/h in 3.06 seconds as long as you have 33.11 metres to spare. 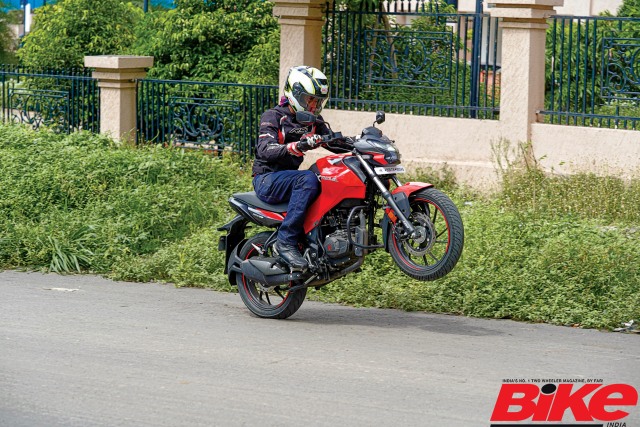 At Rs 1.04 lakh (ex-showroom), the Xtreme 160R finds itself slotted cosily in the middle of the segment in terms of pricing, brushing shoulders with established motorcycles including the Bajaj Pulsar NS160 and the TVS Apache RTR 160 4V. However, when spending more than a lakh of rupees I cannot help being finicky. While the 160R is a dynamically and mechanically sound motorcycle, its inconsistent build quality does not reflect the asking price. For example, the fitting of the seat could have been better and the choice of plastics a grade higher. That prevents the Xtreme 160R from earning a perfect score but does not alter the fact that it strikes a good balance between urban and leisure use. Nevertheless, it is a great product for someone entering the segment and if this is Hero’s new direction, we look forward to the rest of the range. Also, there is a drum brake (at the rear) variant that retails for Rs 99,950 (ex-showroom), but considering the marginal price difference, wouldn’t you rather have the disc brake?