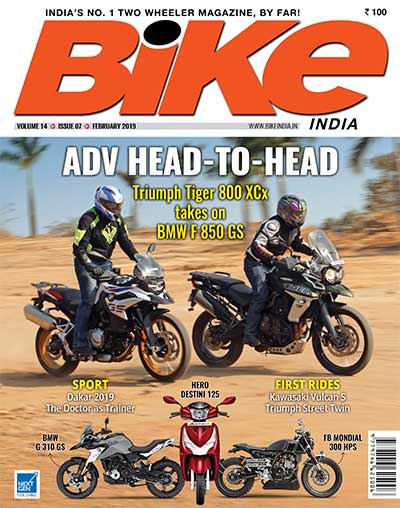 The Indian economy is going through a to ugh time and especially the farming sector is facing a crisis. Naturally, this is taking a toll on the sale of two-wheelers, with most of the big manufacturers showing a de-growth or flat growth for the first time in many years.

The Indian Motorcycle of the Year (IMOTY) award ceremony was held last month and the new Royal Enfield Interceptor had a landslide victory. The Royal Enfield team, headed by Siddhartha Lal, has done a fantastic job with the 650 twins and they deserve all the success. No doubt the twins are fantastic motorcycles, but the icing on the cake is the price; Royal Enfield are not ripping off their customers like others when they add a cylinder and double the price.

Finally, after many years the Pune police are enforcing the mandatory helmet rule for twowheeler riders. Resistance to this is coming from many quarters. Starting with the ordinary citizens, politicians and doctors have opposed the helmet law; some of them saying that you don’t need helmets within city limits since the roads are congested and the speed is low. Incidentally, there is a case in point. I was waiting at a traffic signal and an elderly couple on a two-wheeler were nudged from behind by a three-wheeler. The rider lost control which resulted in the old lady falling backwards as she was sitting side-saddle. Her head suffered a knock on the road and she lost consciousness. She had to be rushed to a hospital. She could have walked away only if she were wearing a helmet. All this happened at less than 10 km/h. Thus, it does not matter at what speed you are riding; wearing a helmet is a must. Wearing a helmet does impede your vision somewhat, that is why you should use rear-view mirrors
while riding your two-wheeler.

Bike India Team – who has written 981 posts on Bike India.