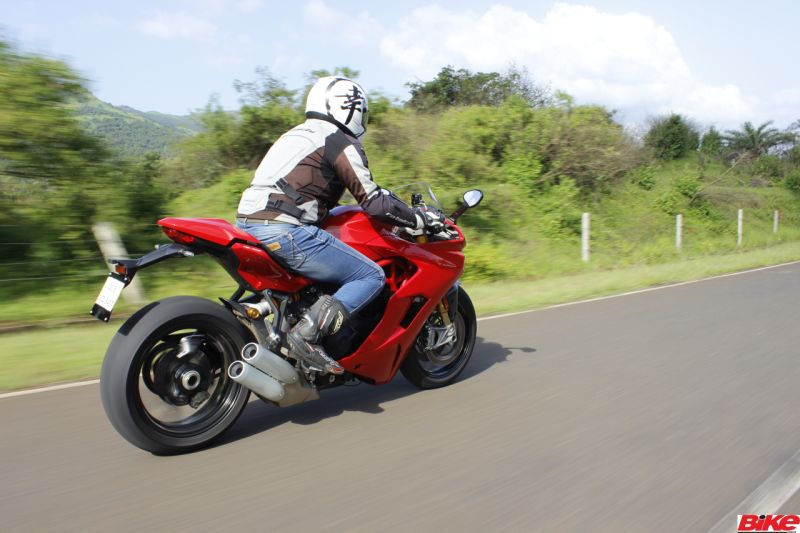 Ducati have brought both the international variants — the SuperSport and SuperSport S — to India. The standard version comes in the unmistakable Ducati red colour with black wheels and powder-coated engine. It has fully adjustable Marzocchi forks and a Sachs rear shock, and is priced at Rs 12.08 lakh (ex-showroom). Pay another Rs 1.30 lakh to get the top-of-the-line SuperSport S, which we have ridden here. This one also gets the same red paintwork or, for a premium, can be bought in white body with red wheels.

The SuperSport S is equipped with fully adjustable Öhlins suspension at front and rear and a fantastic two-way quick-shifter. What makes the S stand out is a pillion seat-cover finished in the body colour, which is a paid accessory for the standard bike. Our test bike came loaded with the optional Performance Pack worth Rs 60,000. This includes a carbon-fibre front mud-guard, LED indicators, adjustable brake/clutch levers and customised cap for the disc brake’s master cylinder. 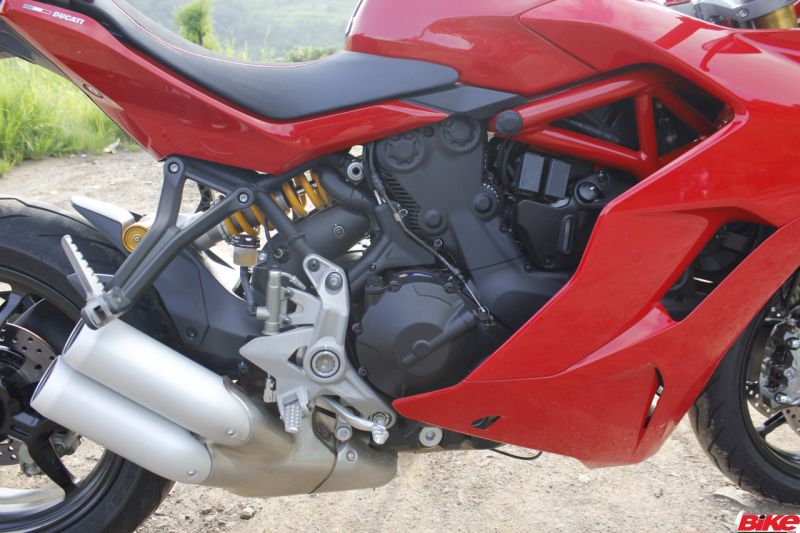 Coming to the powertrain, it sports a 113-PS, 937-cc liquid-cooled, L-twin engine which is also seen on the Hypermotard and the recently launched Multistrada 950. The power figures might not make you fist-punch the air but the idea behind it is to give the bike a rider-friendly nature. For that reason the 93 Nm of torque peaks at 6,500 rpm, with almost 80 per cent of it available at just 3,000 rpm.

Crank it up and it sounds like a typical large V-twin, with a deep and loud note from the exhaust. I was taken aback by its subtle power delivery and flexible nature. It’s a smooth motor and can be revved hard without leaving your hands numb. Once it crosses the 2,000-rpm barrier, the performance is brisk and exciting all the way to the red-line. Obviously, one can compare it to the Panigale but the SuperSport S remains thoroughly enjoyable and would give its litre-class rivals a run for their money.

Since it has three riding modes, I started with the softest one: Urban. This considerably blunts the throttle response, making it ideal for wet conditions or for new riders. Switching to Sport cracks the whip at the 113 horses, making the SuperSport pounce at the lightest of throttle input. I found Touring perfect for our road conditions, as it continued to give full power but without the throttle being overly sensitive. Twist your wrist, and it’ll sprint to 100 km/h in less than four seconds and before you know it’ll go past 150 km/h. It’s fast and enjoyable, without scaring the living daylights out of you. 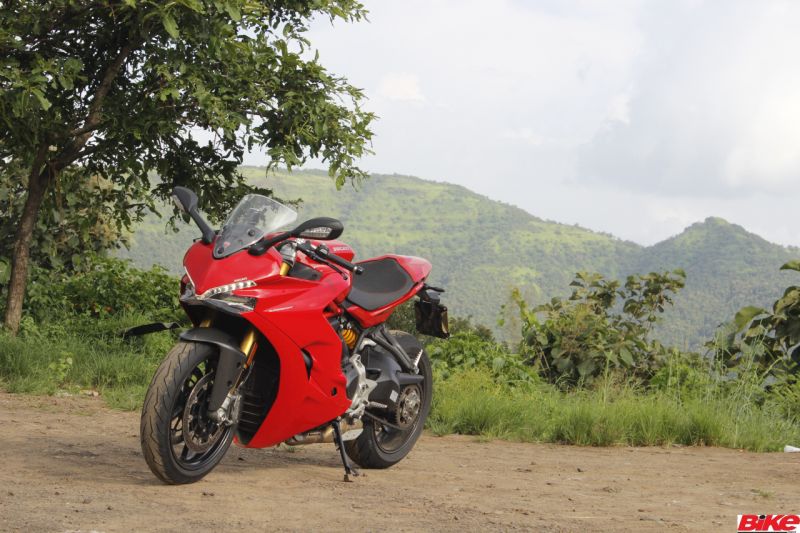 The six-speed gearbox is precise but sometimes needs a bit more effort to shift at lower speeds. And it took me a few kilometres to get used to the two-way quick-shifter. Not engaging the clutch while shifting a gear down came naturally now, but shifting up using the clutch took a while. In no time I started to enjoy it, especially the way it automatically blips and pops, revving the motor to iron out the down-shifts.

As expected, the handling lacks the sharpness of the Panigale, since it’s about 10 kg heavier and has a 47-mm longer wheelbase. The SuperSport S uses a steel trellis frame similar to the Monster; even the single-sided swingarm is borrowed from its naked sibling. While riding on the hilly roads, I enjoyed its agility and eagerness to change direction quickly. In fact, it feels light and compact on the go as compared to some other bikes in the segment. With the high foot-pegs and good cornering clearance, the Ducati should be fun on the racetrack as well.

Not to forget, the SuperSport S comes with sticky Pirelli Diablo Rosso III that offer impressive grip and give confidence to tip the bike over and attack fast corners. Strong braking comes from the ever dependable Brembo setup, along with the much-needed Bosch ABS system. The safety pack also includes eight-level traction control which doesn’t feel intrusive, hence does not steal away the joy of riding.

What also works in the Ducati’s favour is its ride quality. The Öhlins flatten out most bumpy, pothole-ridden patches of road and only feels firm over larger ditches. Since I was concerned about the ground clearance, I took caution while negotiating tall speed-breakers, and managed to avoid the underbody from scraping during my ride: a precaution one has to take while riding fully-faired bikes in India.

Now for a couple of niggles. After shooting on the cool hilly roads, I headed back to the Ducati dealership in town. The city traffic made the engine temperature soar, rapidly reaching a very hot 107 degrees. Another issue is the protruding ends of the trellis frame near the fuel tank. Though covered with plastic caps, they rub against the rider’s inner thigh when gripping the tank tightly. 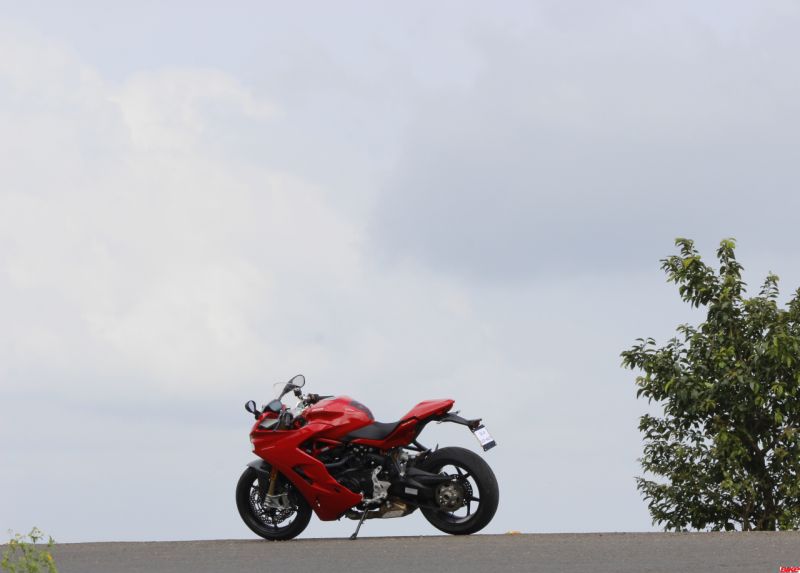 Finally then, should you consider buying the SuperSport S? At Rs 13.39 lakh (ex-showroom), it’s about a lakh-and-a-half cheaper than the Panigale 959, and with the relaxed rider geometry you’ll be riding it more often than its track-focused sibling. Compared to its litre-class competition, the Ducati might not offer an explosive performance, but sure feels more nimble and compact. But the biggest attraction is its enviable Italian flair and gorgeous design, which, thanks to its rich lineage, can kindle passion even while remaining stationary.