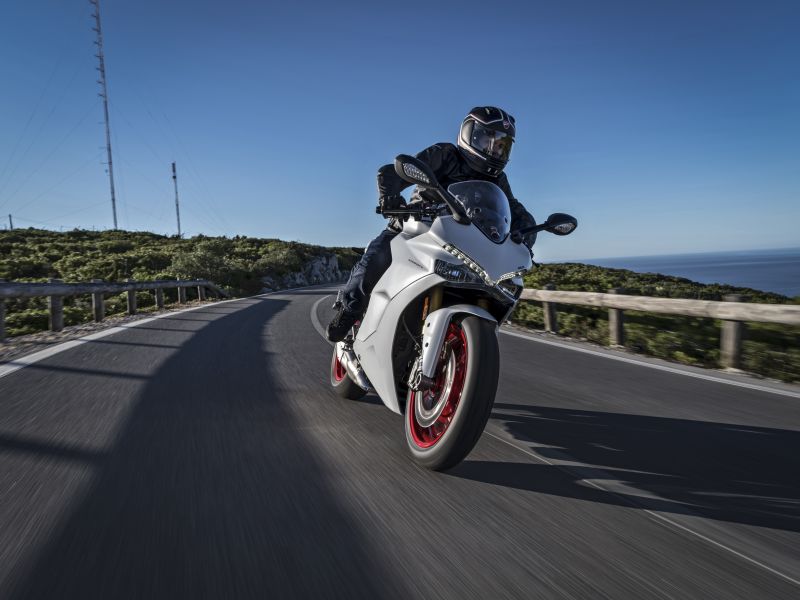 The cylinder-heads and crankcases are also strengthened to allow the engine to form a stressed member of the chassis, by being mounted solidly in the tubular steel trellis frame. This is closely related to the Monster 821’s frame but modified to allow parts, including the headlamp assembly, to be bolted directly to it. The single-sided aluminium swingarm is also borrowed from the Monster, working a shock mounted diagonally on the right of the bike.

The SuperSport isn’t quite as aggressively styled as the Panigales but it still looks sleek and sporty. That impression very much remained when I climbed aboard to find the red paintwork extending inside the fairing, and a neat LED instrument console displaying digital speed below an analogue tacho bar and row of warning lights. Above that was the screen which, like that of BMW’s R1200RS, can be raised or lowered by 50 millimetres simply by pulling or pushing it.

Given the SuperSport’s road focus I was glad to start the launch in southern Spain with a street ride on the standard Ducati, leaving the track-test of the S-model for later. Especially when my group of Italian journalists set off at a healthy pace on the damp road. I started with the bike in Urban, its softest riding mode, but that cuts power and felt boringly flat even in the wet, so I switched to Touring, which gave full power with a relatively gentle throttle action.
In both that and the sharper Sport mode the Ducati was more than quick enough to be fun, giving a respectably sweet throttle response from barely off idle, at least in the lower gears. The motor’s broad torque spread helped make the bike easy to ride in the damp. Ducati say the Testastretta lump produces 80 per cent of its maximum torque output from just 3,000 rpm, and 90 per cent of that figure between 5,000 rpm and 9,000 rpm. 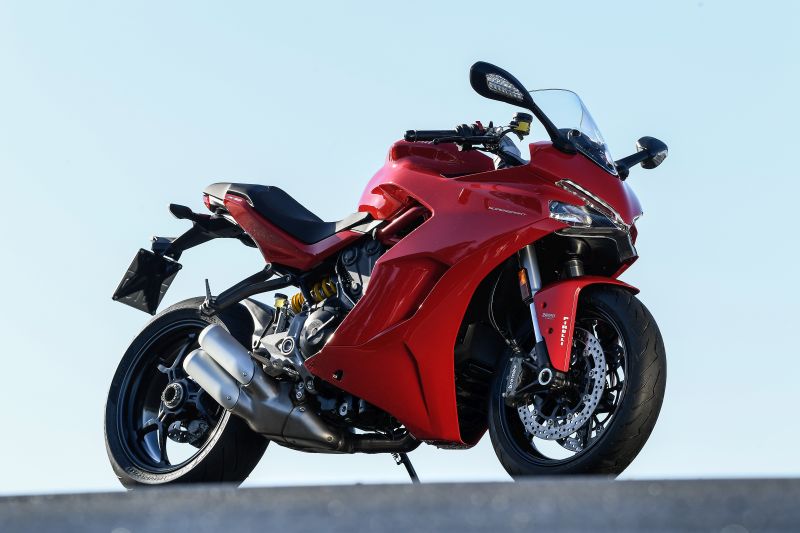 It certainly felt that way, as the SuperSport rumbled forward enthusiastically even when the tacho was showing less than the 6,500-rpm figure at which that peak output is produced. It stayed pretty smooth, too, even up near the 10 grand limit, although the mirrors got blurry at times. When the road opened out, a brief burst of acceleration quickly put 175 km/h on the speedo before I had to slow, well short of the top speed of about 230 km/h.

On the faster sections I was glad that I’d been able to increase weather protection by raising the screen, which was just about possible while riding (though not at high speed). Even the taller setting only took some wind off my chest, but turbulence wasn’t a problem. Shame the higher position only adds about 50 mm, and the screen is pretty slim, but it was useful all the same.

And if the Ducati didn’t offer a genuine sports-tourer’s level of weather protection, the good news was that it also behaved like a sports bike when the road got twistier. Inevitably, the SuperSport didn’t feel quite as sharp as a 959 Panigale would have done. After all, at 210 kg wet it’s about 10 kg heavier, and its 1,478-mm wheelbase is 47 mm longer. With 130 mm of suspension travel up front and 144 mm at the rear, it’s more generously sprung than the Panigale, which gives 120 mm front and 130 mm rear.