We test the most powerful naked motorcycle on sale in the Indian market: Ducati Streetfighter V4 S.

The Streetfighter series by Ducati was introduced in 2008. There were various iterations of the 1098 and the 848 over the years until the series was finally discontinued in 2015. The Ducati Streetfighter V4 S was announced for 2020 and marked the comeback of the series. I remember being highly excited when I first watched the official presentation of the Streetfighter V4 and I kept raving on about the crazy specifications. A 208 horsepower super naked sounds like an illegal idea, but our friends at Ducati love pushing the boundaries of what a motorcycle can be capable of. It is essentially a stripped-down Panigale V4 and brings the fight to the highly competitive segment. Needless to say, getting an opportunity to put this beast of a motorcycle to the test was the best way to end 2021.

This “S” model was the top-spec variant until the “SP” version was revealed a few weeks ago. In my opinion, this is the best-looking naked streetfighter. What catches the eye first is the exposed engine that looks like it is exploding out of the bodywork. It is really stunning how Ducati have managed to fit that wild engine into such a compact package. The headlight set-up is sleek, angry, and gives the bike its menacing character. Ducati had said that the design for this bike’s front end was inspired by The Joker; although, after spending just a few minutes staring at the front, you will notice that it actually looks as if it has been accompanying Batman fight crime at night. This has a lot to do with the matte black colour scheme and the biplane wings that stick out of the side-panels. These aerodynamic wings are said to generate 28 kilograms of downforce at 270 km/h. The rear end is almost identical to the Panigale V4’s with that signature sharp tail, a single-sided swing-arm, and the underbelly exhaust units.

The riding position is really nice with a wide handlebar and foot-pegs that have been moved slightly forward. At my height of 5.7 feet, I found it slightly tall as I had to tiptoe around; even so, I found this motorcycle to be easy to move around. The ergonomics are still slightly on the aggressive side as the rider has to lean forward just a little to reach the handlebar.

We had to do full justice to the bike, so we took it for a longer ride where I got to see what it was like to clock about 230 kilometres in a day. Apart from a slightly strained back, the ride was effortless; a noteworthy aspect being the comfort offered by the seat. There is a lot of space to move around while tackling corners and flicking the bike over from one side to another. The ergonomics surely made it easier to get the knees scraping in the twisties.

The main talking point is the engine. As we all know, this is one of the most powerful engines in the world: the 1,103-cc, liquid-cooled, Desmosedici Stradale, 90-degree V4 with a counter-rotating crankshaft. The aluminium alloy font frame weighs just four kilograms and is attached directly to the upper crankcase of the front cylinder bank and the cylinder-head of the rear bank. The V4 crankcase also supports the attachment point of the monoshock unit and the pivot mount of the single-sided swing-arm. At the rear, the bike makes use of a trellis subframe.

In this application, the Streetfighter V4 S is slightly detuned as compared to the Panigale V4. Considering that it is a naked bike, the power figures are still unimaginable: 208 hp at 13,000 rpm and a peak torque of 123 Nm at 9,500 rpm. As you switch it on, you feel the engine coming to life with a loud roar from the exhausts. This must be the best-sounding bike I have laid my hands on thus far. The V4 engine has been derived from the 2014 MotoGP bike and I really appreciate how Ducati have retained the raw race-bike sound in a bike that is meant for the streets.

There are three ride modes: Street, Sport, and Race. The Street mode tones down the power and is said to put out 150 hp while the other two have the full 208 hp on tap. They can further be customized according to the rider’s preference with individual changes possible in each of the electronic functions. There is a marked difference in the throttle response in each mode. In Street mode, the bike is easy to ride around in the low rpm range and cruise around town with ease. In Sport, it has a great mid-range and this was my preferred mode for this ride. In Race mode, the bike feels more eager to take off when the throttle is twisted. I thought it was going to be a scary affair to ride this hooligan, although it is surprisingly engaging and fun to ride with all the electronics doing their job. The clutch operates smoothly and the six-speed gearbox is slick. The quickshifter and the blipper worked really well to make the highway ride effortless. 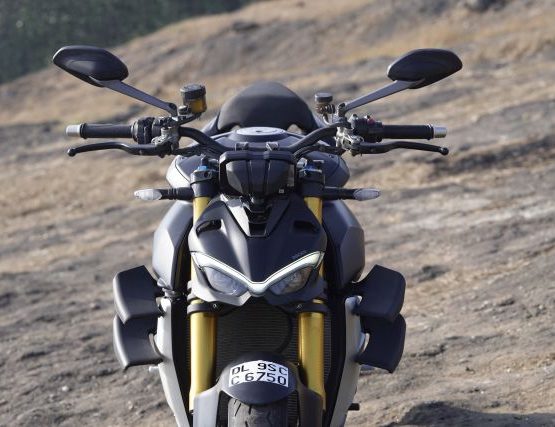 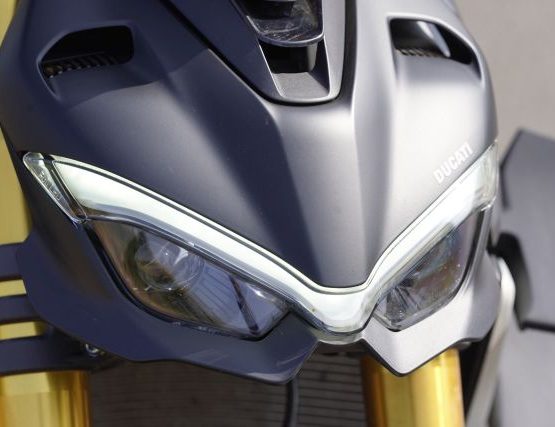 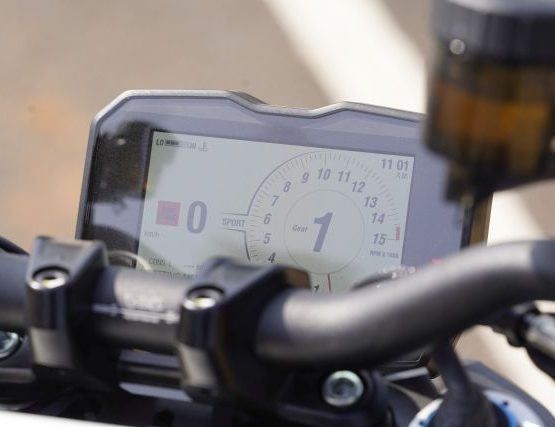 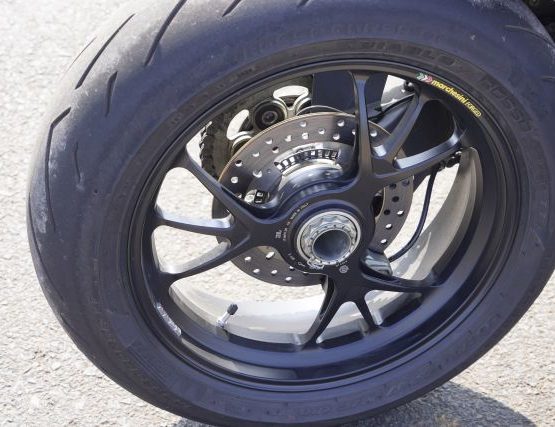 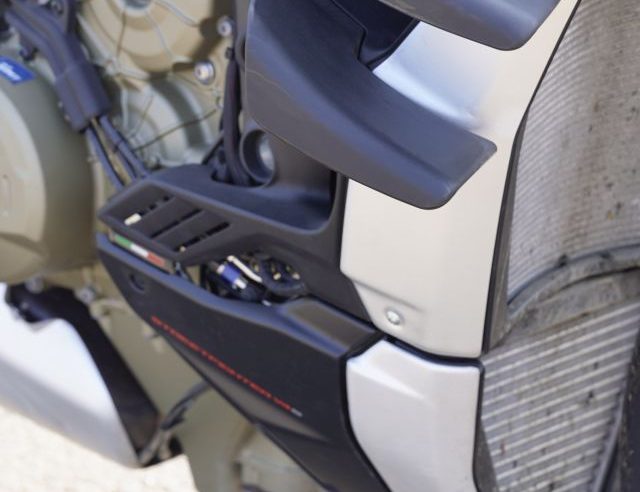 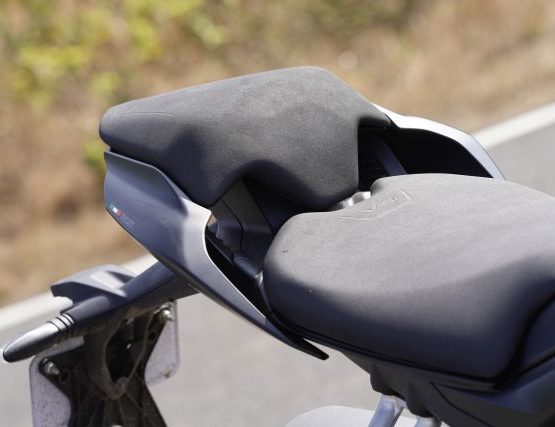 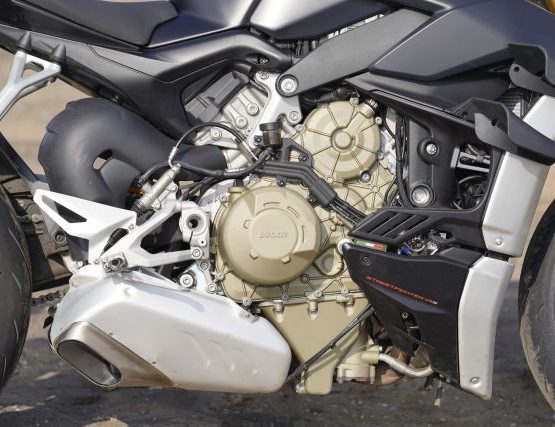 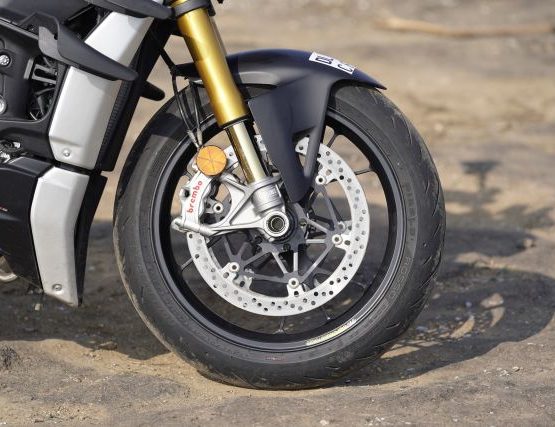 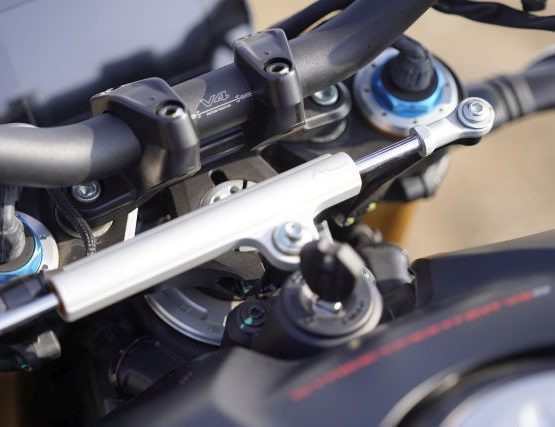 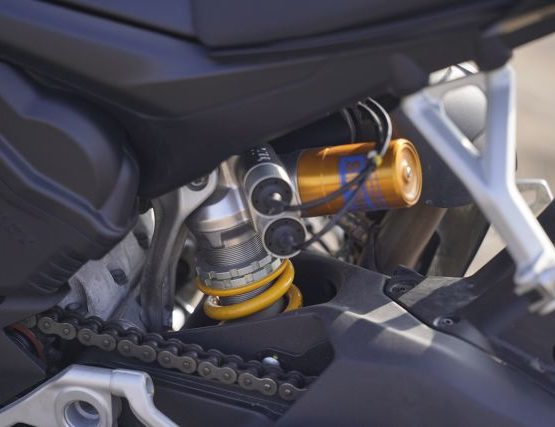 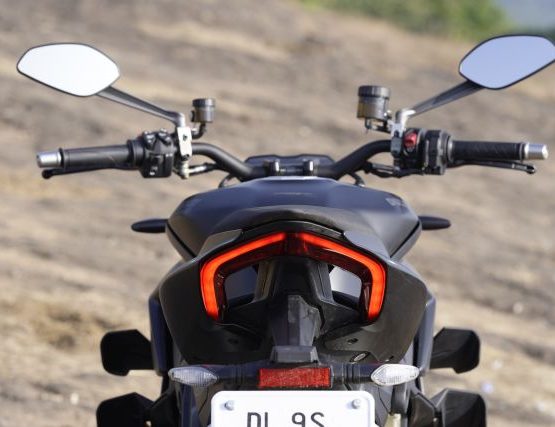 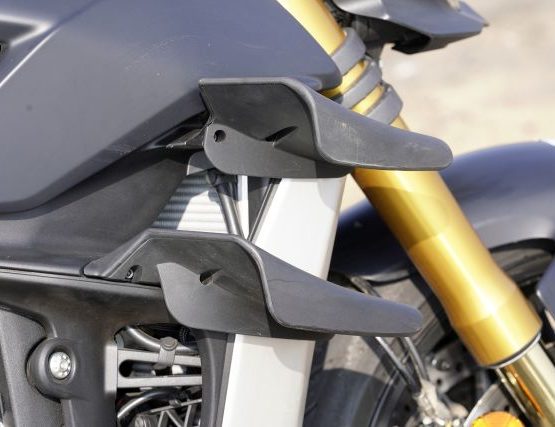 However, things do get really scary when you try to venture beyond the 10,000-rpm mark. I had to shift every time I got to around 10,500 rpm because of how energetically the engine still pulled; almost as if it wanted to rip your arms out. The acceleration is calm in the low rpm, engaging in the mid-range, and just brutally savage in the top end. I achieved a top speed of around 195 km/h and I did not even have to make any effort to do that.

What makes this bike so usable is the nature of the engine. It allows cruising at speeds of 70 km/h in sixth gear comfortably and its torque-y nature makes it accelerate hard and fast from lower rpm in higher gears. It is so enjoyable to just shift through the gearbox as it has plenty of power and torque in reserve throughout the rev-range. The true potential of this bike cannot be tapped on public roads. A racetrack or an airstrip are the only places where the capabilities of this machine can be exploited fully.

As you would expect, this engine does run really hot at all times and guzzles petrol. I constantly saw an average fuel-efficiency reading of between nine km/l and 15 km/l, so fuel stops are going to be frequent with the 16-litre fuel-tank. Also, for some reason, there is no fuel-gauge on the display, although these are things that are normal for a motorcycle that has been built essentially for performance.

What distinguishes this variant from the standard model is the use of top-spec, fully adjustable Öhlins electronic suspension: a 43-mm NIX-30 front fork and a TTX36 shock-absorber at the rear. It also sports lightweight Marchesini three-spoke forged aluminium wheels as compared to the five-spoke alloy wheels on the standard model. The changes have helped the S model shed two kilos; it weighs 199 kg (kerb). You would think that this is enough performance, but there is an option to further install an Akrapovic exhaust system that has been engineered specifically for this motorcycle. It bumps up the power to 220 hp and reduces six kilos in weight. Now, that is just insane.

I have been lucky to ride a few of the modern-day Ducati models and have been impressed by the handling abilities of each one of them. This one surpassed all my expectations with its stellar ability to remain sharp, planted, and flickable through a set of corners. Be gentle with the throttle and the Streetfighter V4 will reward you with the confidence to ride it faster. I spent the day riding with the Öhlins electronic suspension in the Dynamic setting. The feedback from this set-up is amazing as it perfectly soaked up sections of bad roads and was a hoot while tackling corners too. Overall, the 230-km ride was plush throughout. With the help of advanced setting, preload, damping, and compression can be electronically adjusted to stiffen it up and extract further performance.

The Streetfighter V4 features top-spec Brembo Stylema calipers where each one mounts four 30-mm pistons on the 330-mm dual discs at the front. At the rear is a single 245-mm disc with a two-piston caliper. These brakes do a superb job of getting the bike to a halt and offer great feedback when used aggressively too. Special mention must be made of the Pirelli Diablo Rosso Corsa II rubber for keeping the Streetfighter stable and for handling all the power that the engine is putting down.

No ordinary mortal would be able to ride this motorcycle without recourse to the electronic aids on offer. The bike gets the entire electronics package from the Panigale V4. It makes use of a six-axis IMU that supports electronic assist functions such as wheelie control, slide control, launch control, cornering ABS, engine brake control, and the up/down quickshifter. The level of each of these electronic aids can be changed on the go with the switchgear on the left. It is easy to navigate through the various options once the rider has become acquainted with the bike. It just takes a bit of getting used to.

With a premium price tag of Rs 23 lakh (ex-showroom), the Streetfighter V4 S is not accessible to everyone. I remember admiring the motorcycle in my garage while it was parked there for the night and it dawned upon me that it is more expensive than the two cars and three two-wheelers that my family own. It is not a practical machine for the streets by any means, but impractical vehicles like this seem to be the most desirable. This Italian beauty offers the rider one of the most exhilarating ride experiences and has given me memories to cherish forever. Considering my love for naked bikes, I wouldn’t think twice before buying this if I had the money. In this day and age when the world is trying to shift to electric vehicles, bikes like the Streetfighter V4 S give me hope in the future of ICE motorcycles. I hope Ducati will keep producing savage motorcycles like this one in the future or at least till the day I can afford to buy one of them.

Azaman Chothia – who has written 195 posts on Bike India.