‘Norton resisted requests to produce more Domiracers, but that bike has now given birth to a street-legal model, the Dominator, plus this even more exotic variant, the Dominator SS, or Super Sport.’ We rode it recently in and around Donington Hall in the United Kingdom 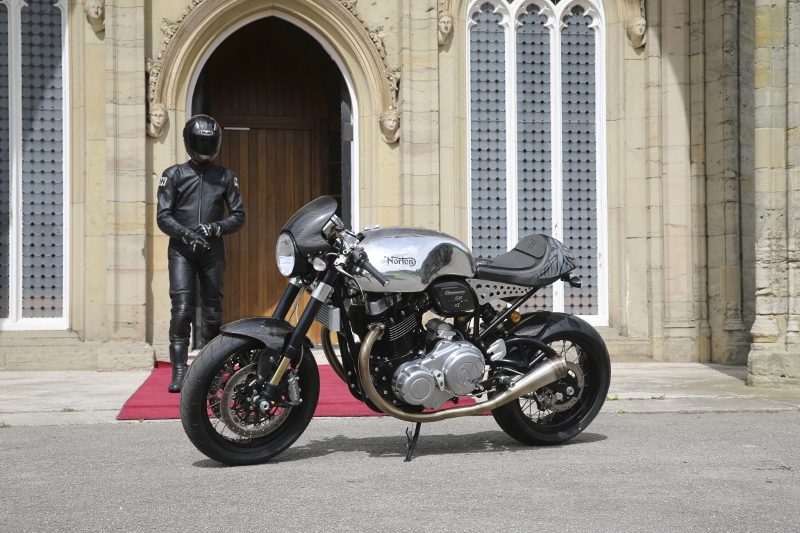 Despite running a few minutes late in returning the Dominator SS, I couldn’t resist one short, final detour. Norton’s factory is located to the rear of Donington Hall, signposted to the right at a fork in the access road. But I aimed the bike left, instead: down the short, tree-shrouded drive that suddenly curved to give a view of the classically symmetrical Gothic stately home.

A pair of Union Jack flags fluttered from the roof. Norton boss Stuart Garner’s Aston Martin – number-plate SG V8 – was parked outside near the red carpet at the door. It was a magnificent, quintessentially British scene, surely made all the more stirring by the arrival of an equally spectacular Norton motorbike, sun glinting off the mirror finish of its shapely petrol tank.

I rode slowly up the drive, made a quick lap of the circular garden feature outside the Hall’s front door, then gunned the Dominator’s parallel twin engine to exit the way I’d come, the straight-through pipes bellowing a brief but deafening note. A couple of minutes later I was pulling up outside Norton’s factory reception, handing back the SS to a mechanic – “We heard you coming” – and stepping off with my ears ringing, pulse racing and a huge grin on my face.