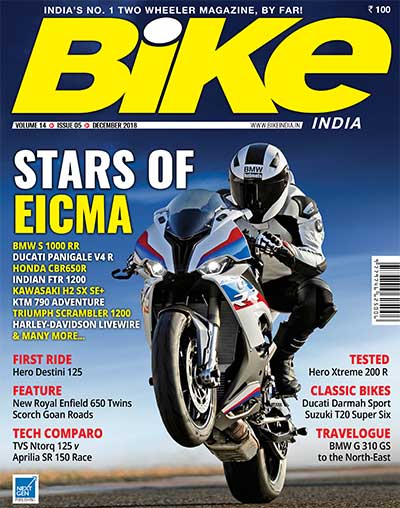 LAST MONTH I RODE THE ROYAL ENFIELD 650 TWINS IN THE US AND WE WERE REALLY impressed by the two motorcycles. At that time I speculated that the Conti GT would be priced around the Rs 3 lakh mark and the Interceptor around Rs 2.75 lakh. However, Siddhartha Lal blew us all into the Arabian Sea in Goa at the launch with the announcement of the prices: Rs 2.50 lakh for the Interceptor and Rs 2.65 lakh for the Continental GT. In fact, Siddhartha reminded me about a discussion we had had at their technical centre in the UK last year about how manufacturers tend to double the price of a motorcycle when they add a cylinder to the engine, say, from a single to a twin-cylinder. The single-cylinder 535 Conti GT was priced at Rs 2,10,000 and now Royal Enfield have not doubled the price, but just charged the cost of adding another cylinder. With this pricing Royal Enfield are sure to shake up the motorcycle market and, in the process, have also shown how manufacturers have been taking the customer for a ride.

Mahindra’s Classic Legends have brought the Czech brand, Jawa, back to life by launching the Jawa 300-cc, the “Jawa forty two”, and concept Perak with Bobber styling.

Last month Hero MotoCorp showed four versions of the X Pulse at the biggest motorcycle show in the world, EICMA (the Milan Motorcycle Show). The four variants looked very impressive. After parting ways with Honda, Hero have gone from strength to strength. Taking on the best global players head-on is no mean feat. Hats off to Pawanji for achieving monthly sales of 7,50,000 motorcycles. A great job, sir!