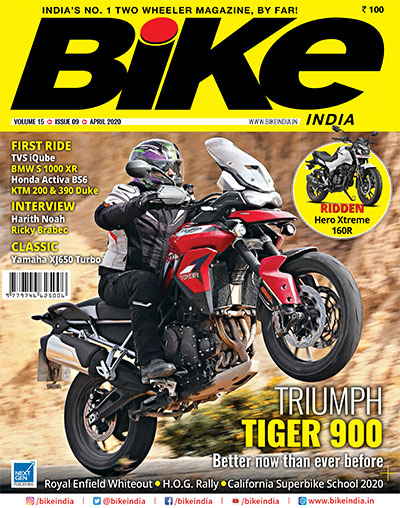 THE INDIAN ECONOMY IS IN A SLOW-DOWN AND, TO MAKE MATTERS WORSE, NOW the world is facing the threat of the coronavirus. It is taking a further toll on the Indian two-wheeler industry. In the days gone by, a virus in China would not have affected the Indian two-wheeler manufacturers because all the components were sourced locally. Today, in this age of globalization, manufacturers are sourcing cheap components from across the world and especially from China. There is a problem with the supply of components from China and this has had an adverse effect on the production of two-wheelers. The switch to Bharat Stage VI is also going to be a problem since most fuel-injection components are sourced from China.

The EV manufacturers across the world are going to face difficulties due to the virus because more or less all the battery and 90 per cent of the components are sourced from China.

The Husqvarna brand was launched at the India Bike Week in December 2019 and now they have entered the market with two models, the Svartpilen and Vitpilen, both 250-cc. The Huskies are using the KTM engine and frame with different body work. We will bring you first ride reports of both the bikes in the next month’s issue.

This is a good time to travel on your bike as you don’t know who is going to sit next to you on a bus, train or aircraft. The MotoGP season has taken a big hit with the Qatar round only running the Moto2 and Moto3 classes following a ban on Italians from entering the country. Moto2 and Moto3 went ahead as they were already in the country for testing. At the time of going to press, the Thailand, Argentina, and US rounds have been postponed to a later date.