It was at George, on the coast near Cape Town, that we rode the first BMW R1200GS at the time of its launch nine years ago. Now the locale remains the same, but the bike is a vastly improved 2013 version

The bike and the spectacular South African landscape are familiar and so is the feeling that BMW’s dual-purpose boxer has made a significant advance. But as I crack open the throttle and the latest R1200GS leaps forward with a throaty exhaust bark and a kick in the back that the previous model couldn’t have matched, it’s clear that this 2013 version of the all-conquering adventure bike is improved in a very different way to its predecessor.

On the first R1200GS’s launch here at George, on the coast near Cape Town, back in 2004, the biggest impact came from its much lighter and more responsive chassis. Now, nine years and a phenomenal total of more than 1,80,000 sales later, the all-new GS is also in George and making a similarly strong first impression — but this time with its engine.

When I run the bike through the gears for the first time on the road heading north out of town, it’s clear that the new motor has significantly more torque and power, plus a free-revving nature that makes it feel distinctly more lively. This model will be remembered as BMW’s first liquid-cooled boxer, but, perhaps, it should more accurately be regarded as the bike that brought a new level of fun, as well as performance and sophistication to the familiar engine layout. 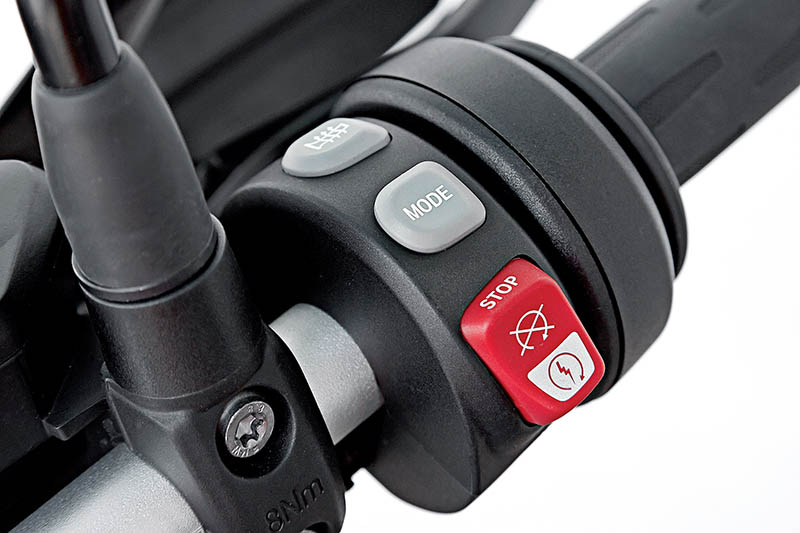 More important even than the move to partial liquid-cooling (air still does more than half the work) is the re-designed cylinder arrangement — obvious from the engine’s intake above the cylinders and exhaust below, rather than behind and up front as before. As the GS project leader, Antonius Ruhe, put it, “We remained faithful for 30 years and came up against the engine’s thermal limits. It was time to strike out!” 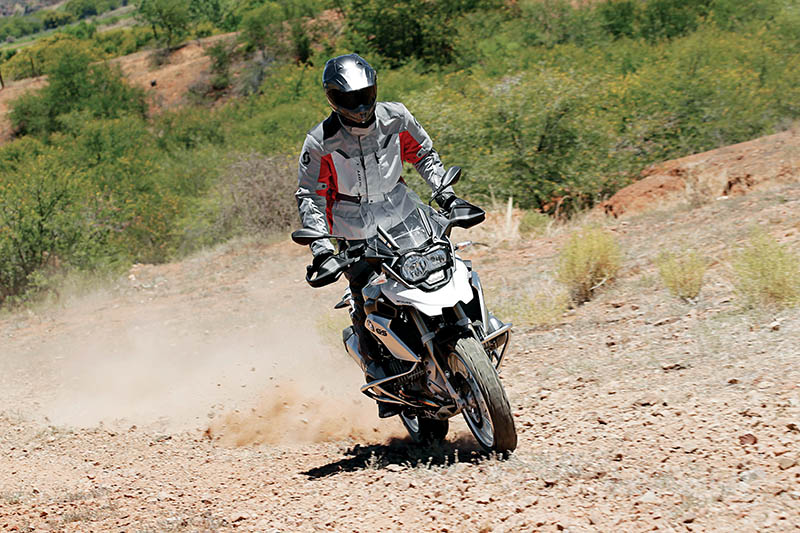 The new layout allowed Ruhe and his team to give the DOHC eight-valve engine, whose 1,170 cc capacity is unchanged, more power and torque throughout the rev range to a 15 PS higher maximum of 127 PS at 7,700 revolutions per minute. While they were at it, they gave the GS ride-by-wire throttle control (called E-gas) with the option of five engine modes, including two Enduro settings, plus the ability to link these to automatic adjustment of the semi-active suspension, as with the super-sports HP4 and Ducati’s Multistrada 1200S.

The powerplant — which also incorporates a new wet, multi-plate clutch and left- instead of right-sided drive shaft — is far from the only significantly updated part of the GS. Along with the optional semi-active suspension, its chassis gets a new steel frame, re-designed Telelever front and Paralever rear suspension designs, wider tyres and Brembo Monobloc callipers with ABS as standard fitment. Other new features include one-handed windscreen adjustment and a multi-adjustable seat, plus the option of LED headlights and running light. 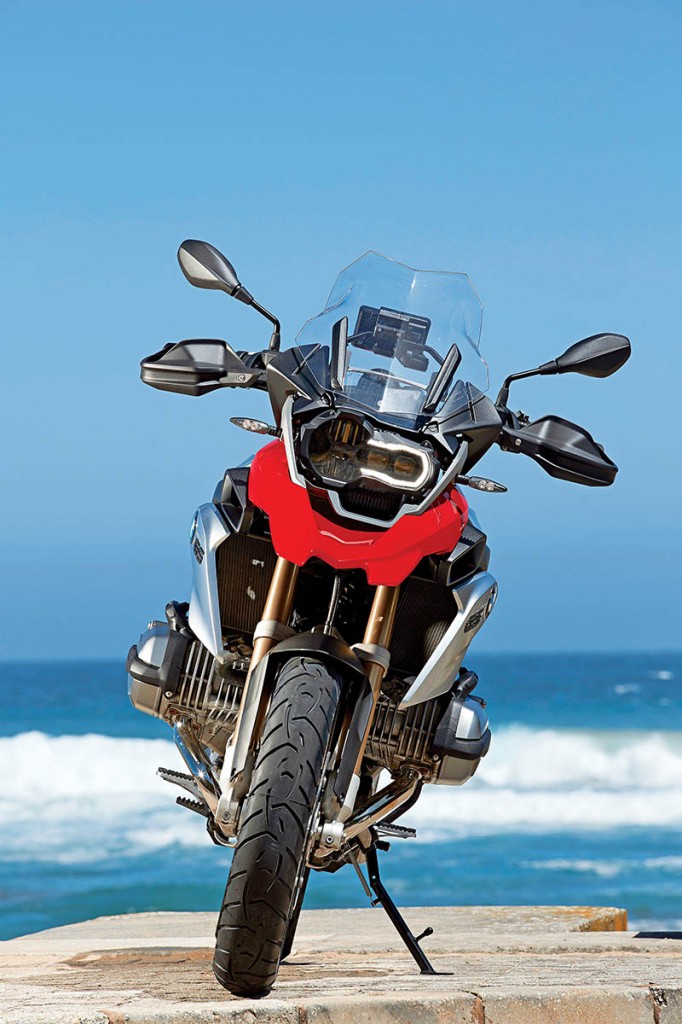 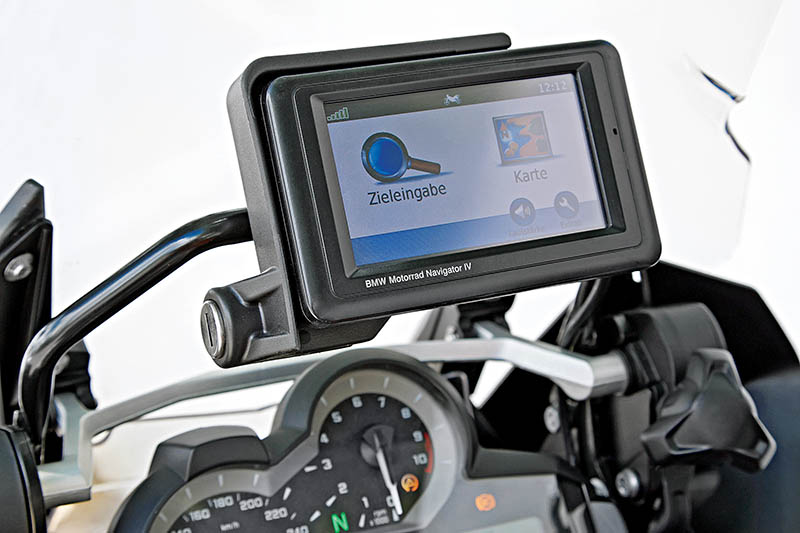 The new transmission system balances the longitudinal crankshaft to such a degree that there was barely a twitch of torque rock as I fired up the motor and blipped the throttle. The new boxer is refined in other respects, too, its six-speed gearbox smooth and accurate with minimal clonk. And that new-found performance is instantly obvious. The boxer has the same feel as before, just with a more urgent response to the throttle. 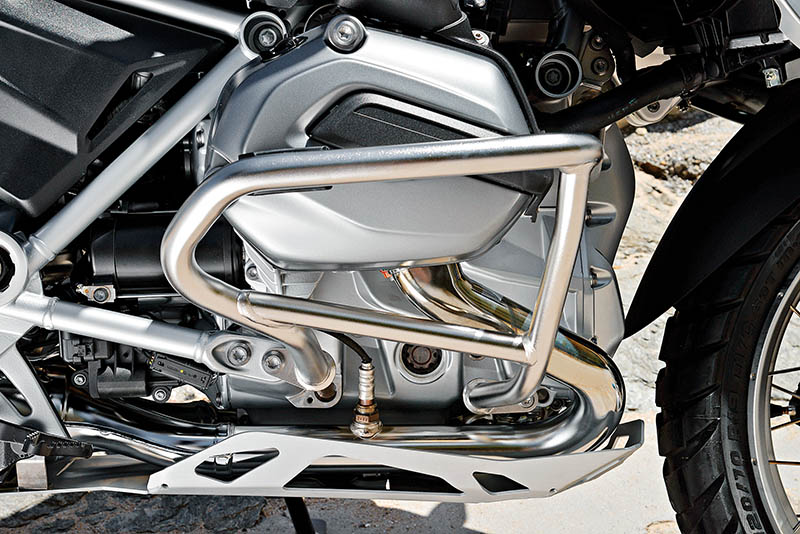 In the standard ‘Road’ mode it pulled crisply from below 3,000 RPM and was notably more keen than the old model to keep revving, kicking at six grand and zipping towards the 9,000-RPM red-line through the gears on the fairly fast, open R62 towards Oudtshoorn, while the old motor would have been feeling a bit wheezy up near its 500-RPM lower limit. The new lump is smoother at high revs, too, thanks to the more compact crank and re-designed balancer. And there’s more of a bark to its exhaust note, at least when the motor is being revved. 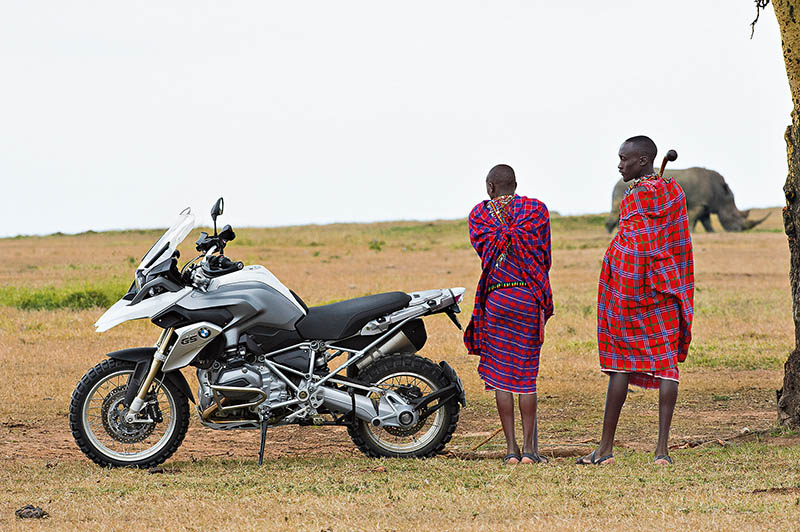