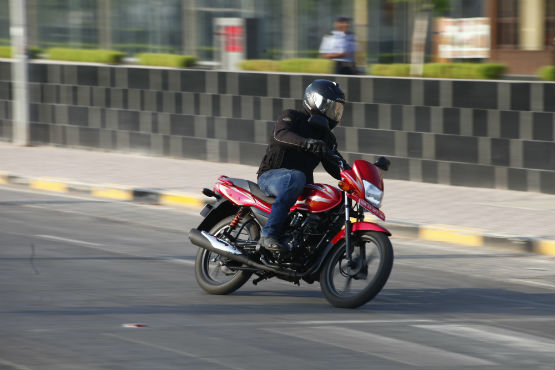 Once astride the bike, the horizontal saddle feels comfortable and the handlebars are within easy reach so as to seat me in that relaxed upright position; one that is favoured by the 50 lakh customers of the Platina. I thumb the starter and the long stroke DTS-i engine cranks up with an enthusiastic purr, urging the bike to make its way through the cluttered streets of Pune. Power delivery is linear and gear ratios are well spaced out through the all-down four-speed gearbox. The first and second gears are short for low-end grunt, whereas the third and fourth gears are appropriately tall for higher speeds. The bike gains 70 km/h with ease but begins to break into a sweat beyond that — all the way up to the top speed of 95 km/h (true speed 91.5 km/h). Living up to the claim of ‘the world’s most fuel-efficient bike’ is a difficult task, but we can say with conviction that the Platina consumes fuel with the prudence of a tight-fisted accountant. Overall fuel efficiency stands at a 71 km/l — much lesser than the claimed 96.9 km/l, but still extremely frugal.

The bike feels planted through the corners thanks to the revised frame and holds its line without any drama. The suspension is set up firmly enough to handle most undulations on the road and offers decent comfort even with a pillion on-board. The bike filters through traffic with considerable aplomb and is flickable at the speeds it is capable of achieving. However, once the bike has gained momentum, bringing it to a halt is not exactly a progressive experience. The 110 drum brakes (front and rear) lack feel and do not offer the expected bite. For a bike that aims to target the urban commuter, it lacks the much needed disc brake at the front.  In a country where one can expect everything ranging from a cow to an 18-wheeler to abruptly get in the way of your proposed trajectory, a disc brake at the front would have been more than welcome, even if offered optionally.

All in all, the Platina is an able performer and is exactly what it claims to be — an urban commuter bike with engine dimensions smaller than my coffee mug but still offers moderate punch. It sips fuel like a sparrow and delivers fantastic fuel efficiency. The Platina ES locks horns with strong contenders such as the Hero HF Deluxe Eco, Honda Dream Neo, Suzuki Hayate and the TVS Sport, and at Rs 51,411 (on-road, Pune), it is the second most economic option from the lot. Earlier this year, Ravi Kumar, President of Business Development, Bajaj Auto, said that their market share in the 100-cc segment, which stood at 16-17 per cent, will go up to more than 20 per cent with the launch of the Platina ES and with this value-for-money proposition, Bajaj might just pull off what they have set out to achieve. 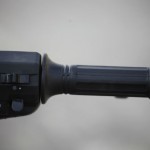 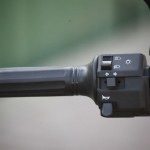 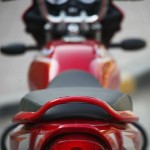 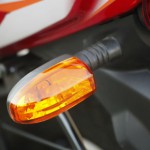 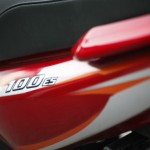 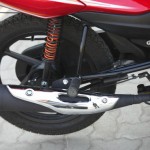 Bike India Team – who has written 974 posts on Bike India.